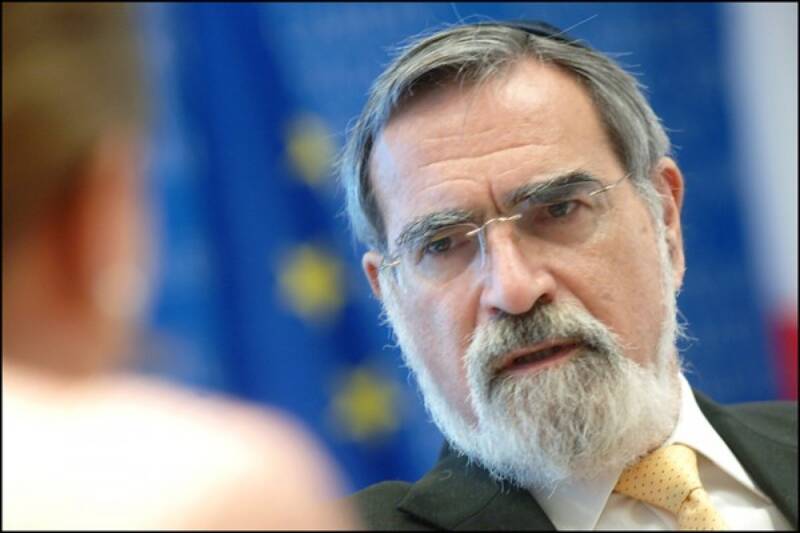 Dialogue lies at the roots of European civilisation but is not enough on its own. We also need closer social bonds in the form of “covenantal relationships”, according to Sir Jonathan Sacks, Chief Rabbi of the United Hebrew Congregations of the British Commonwealth, who addressed a formal sitting of the House on Wednesday.

Introducing Sir Jonathan Sacks, European Parliament President Hans-Gert Pöttering stated that with the Chief Rabbi’s address the EP had now welcomed representatives of the Judaic, Christian and Islamic religions, each of which, along with humanism and the Enlightenment, had made their contribution to today’s European society.

Mr Pöttering saluted the positive contribution of religion to society, notably in “the development of our ethical awareness and our values”, and then, referring to Sir Jonathan’s book “The Dignity of Difference”, said “you have grasped the key issue of our time: can we all live together in peace and if so, how?”

After opening his speech with a short blessing, and recalling that “European civilisation was born 2000 years ago in dialogue” when the worlds of ancient Greece and Biblical Israel were “brought together by Christianity”, the Chief Rabbi spoke of three of the “great moments” in the intervening period, which he said were “the result of dialogue”.

The culture of al-Andalus in Spain in the 10th to 13th centuries had produced a cross-fertilisation of Islam, Judaism and Christian thinkers. At the start of the Italian Renaissance, Pico della Mirandola, author of the Oration on the Dignity of Man – seen by some as the manifesto of the Renaissance – had had a Jewish teacher, Rabbi Elijah ben Moses Delmedigo. Most poignant of all to us, according to Dr Sacks, was the Jewish/Christian dialogue after the Holocaust, notably the teachings of the Jewish philosopher Martin Buber and the Second Vatican Council’s publication of Nostra Aetate (a declaration on the relation of the Church with non-Christian religions). Thankfully, he concluded, “today Jews and Christians meet in mutual respect as friends”.

The Chief Rabbi also cited several passages from the Hebrew Bible to illustrate his views on identity and dialogue, including the story of Cain and Abel, where “dialogue failed”, proving that “where words end, violence begins”. Underlining the value of dialogue, he said “if we were completely different there could be no communication but if we were totally the same we would have nothing to say”.

And yet, Sir Jonathan continued, “dialogue may not be enough” since “dialogue can’t always keep us together if other forces drive us apart”. Here he moved on to the other key message of his speech.

In his view, we also need “covenants”, evoking Biblical covenants such as the one by which the 12 tribes of Israel agreed to form one nation. A covenant, he pointed out, is not a contract. In a contract, each side is seeking its own advantage, whereas “in a covenant, two parties come together to achieve what they can’t achieve alone”. In other words, “a contract is a deal, a covenant is a marriage”. More precisely, “a contract deals with ‘arenas of competition’ while a covenant deals with ‘arenas of cooperation’ “.

“This vital distinction not always clear enough in European politics”, he argued. “You can have a society without a state but can you have a state without a society?” A key element of this view is that we need to “focus not just on rights but also on responsibilities” since “rights without responsibilities are the subprime mortgages of the modern world”. By contrast, “covenants lead us to think about reciprocity”. Dr Sacks contended that “Europe needs a new covenant and the time to begin is now”, in the midst of the economic crisis.

He also told the House that last Thursday, he and other British religious leaders had visited Auschwitz, where they had felt keenly “what happens when people lose mutual respect”.

Concluding, the Chief Rabbi said: “God has given us many languages but only one world to live in” and he expressed the hope that we may, in our diversity, “write a new European covenant of hope”.

The Chief Rabbi also held bilateral meetings with the Heads of all the major political groups in the European Parliament.