Extract from “Deuteronomy: The Renewal of the Sinai Covenant” 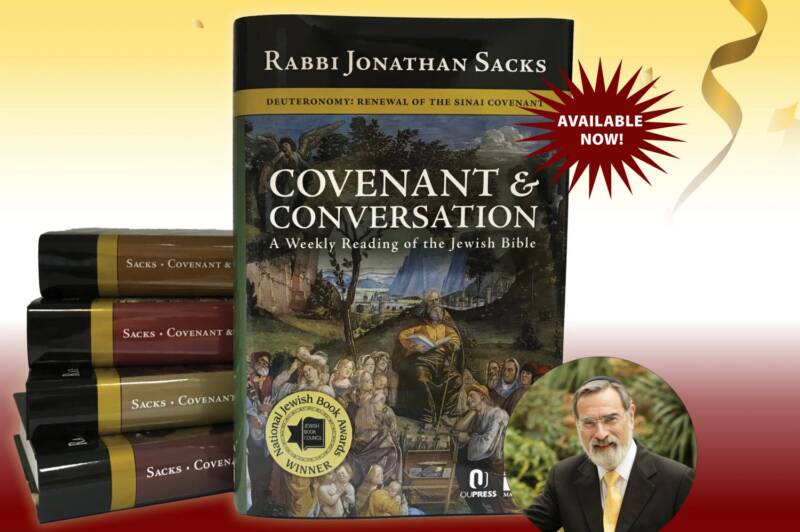 Below is an extract from the introduction of “Deuteronomy: The Renewal of the Sinai Covenant”, the fifth instalment of Rabbi Sacks’ Covenant & Conversation book series on the weekly parsha. To learn more about this series, please click here.

With the book of Deuteronomy, the entire biblical project becomes lucid and reaches its culmination. Deuteronomy is the last act of the Jewish people’s drama before becoming a nation in its own land, and it forms the context of all that follows. It is the deepest and most remarkable statement of what Judaism is about, and it is no less relevant today than it was then. If anything, it is more so.

Among other things, the book tells us what Judaism is not. It is not a drama about the salvation of the soul and the rescue of humanity from the lingering effects of original sin. Indeed there is nothing in the Hebrew Bible about original sin, nor does the idea accord with its theology, according to which we are punished for our own sins and not for those of distant ancestors like Adam and Eve.[1] At the very most, the Bible talks about visiting the sins of the fathers on the children to the third and fourth generation,[2] not about doing so for hundreds of generations. Deuteronomy is not Christianity.

Nor is it Islam. The term Islam, meaning “submission” or “surrender” to the will of God, does not exist as a concept in Judaism at all. Strikingly in a religion that contains 613 commands, there is no Hebrew word that means obedience. The closest equivalent – shema – means not obedience but rather hearing, listening, striving to understand, internalising, and responding in deed. The very tone and texture of Deuteronomy is directed not at blind obedience but at the contrary: it is a sustained attempt to help the people understand why it is that God wants them to behave in the way that He does, not for His sake, but for theirs.

Deuteronomy roots Jewish law less in the arbitrary will of the Creator than in the concrete history of the nation and its collective memory of what it felt like to be slaves, without rights, without rest, without dignity, and without hope. We see in Deuteronomy precisely why the events of the book of Exodus were necessary. The people had to remember what it felt like to live within a society that accorded minorities no rights and that treated much of humanity as a corvée, a conscripted labour force.

Why, though, should religion be involved in society at all? Maimonides tells us that Judaism is directed towards perfection of the body and of the soul. The latter is higher in value, but it cannot be achieved without the former – by which he means perfection of society. For, as he says, “the well-being of the soul can only be obtained after that of the body has been secured.” It is absurd to suppose that people can reach spiritual heights if they lack the most basic material necessities. “A person suffering from great hunger, thirst, heat, or cold, cannot grasp an idea even if communicated by others, much less can he arrive at it by his own reasoning.” So a good society is a precondition of spirituality. This requires, first, “removing all violence from our midst,” and second, “teaching every one of us such good morals as must produce a good social state.”[3]

Hence the programme of Deuteronomy, which is fundamentally about the creation of a good society based on collective responsibility, or, as the opening phrase of the Preamble to the United States Constitution puts it, forming a group of “We, the people,” under the sovereignty of God. The good society is the essential precondition of spiritual individuals, “since man, as is well known, is by nature social.”[4]

Such a society is to be based on justice and tzedaka, meaning more than merely procedural justice, but in addition what we would call equity or fairness. Nor is that society to be based on abstract principles alone. Instead it is grounded in collective memory and active recall, in particular through celebrations at the Temple at various points of the year.

Underlying this thesis – that the life of faith requires a society dedicated to goodness as a whole – is the poignant story of Noah in the book of Genesis. Noah is the only person to be called righteous in the entire Hebrew Bible, but in the end Noah saved only his family, not his generation. He kept his own moral standards intact but failed to be an inspiration to others. Individual righteousness is not enough.

Likewise, it was not enough for Abraham and Sarah and their descendants to be a family or clan in the midst of a larger social unit. We see this repeatedly in Genesis. Every time a member of the family has some form of engagement with the wider society, they face danger, most often in the form of sexual assault. This reaches a terrifying denouement in Genesis 34, where Jacob’s daughter Dina is abducted and raped by the local prince, Shechem. No one emerges well in this story, which is there to tell us that in the long run, individual piety is unsustainable without collective moral responsibility.

Deuteronomy is in essence a programme for the creation of a moral society in which righteousness is the responsibility of all. The good society was to be, within the limits of the world as it was thirty-three centuries ago, an inclusive if not an entirely egalitarian one. Time and again we are told that social joy must embrace the widow, the orphan, the stranger, and the Levite, people without independent status or means. It is to be one nation under God.