The Festival of Insecurity

A message for Succot 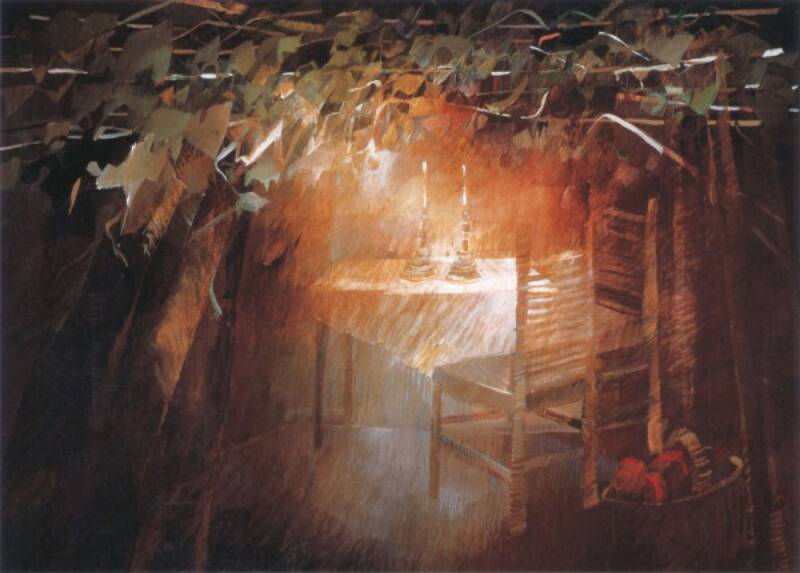 What exactly is a succah? What is it supposed to represent?

The question is essential to the mitzvah itself. The Torah says:

In other words, knowing – reflecting, understanding, being aware – is an integral part of the mitzvah. For that reason, says Rabbah in the Talmud (Succah 2a), a succah that is taller than twenty cubits (about thirty feet or nine metres high) is invalid because when the sechach, the “roof,” is that far above your head, you are unaware of it.

So what is a succah? On this, two Mishnaic Sages disagreed. Rabbi Eliezer held that the succah represents the Clouds of Glory that surrounded the Israelites during the wilderness years, protecting them from heat during the day, cold during the night, and bathing them with the radiance of the Divine Presence. This view is reflected in a number of the Targumim. Rashi in his commentary takes it as the “plain sense” of the verse. Rabbi Akiva on the other hand says succot mammash, meaning a succah is a succah, no more and no less: a hut, a booth, a temporary dwelling. It has no symbolism. It is what it is (Succah 11b).

The festival of Succot, according to Rashbam, exists to remind us of our humble origins so that we never fall into the complacency of taking freedom, the land of Israel and the blessings it yields, for granted, thinking that it happened in the normal course of history.

However there is another way of understanding Rabbi Akiva, and it lies in one of the most important lines in the prophetic literature. Jeremiah says, in words we recited on Rosh Hashanah, “‘I remember the loving-kindness of your youth, how as a bride you loved me and followed me through the wilderness, through a land not sown” (Jer. 2:2). This is one of the very rare lines in Tanach that speaks in praise not of God but of the people Israel.

“How odd of God / to choose the Jews,” goes the famous rhyme, to which the answer is: “Not quite so odd: the Jews chose God.” They may have been, at times, fractious, rebellious, ungrateful and wayward. But they had the courage to travel, to move, to leave security behind, and follow God’s call, as did Abraham and Sarah at the dawn of our history. If the succah represents God’s Clouds of Glory, where was “the loving-kindness of your youth”? There is no sacrifice involved if God is visibly protecting you in every way and at all times. But if we follow Rabbi Akiva and see the succah as what it is, the temporary home of a temporarily homeless people, then it makes sense to say that Israel showed the courage of a bride willing to follow her husband on a risk-laden journey to a place she has never seen before – a love that shows itself in the fact that she is willing to live in a hut trusting her husband’s promise that one day they will have a permanent home.

If so, then a wonderful symmetry discloses itself in the three pilgrimage festivals. Pesach represents the love of God for His people. Succot represents the love of the people for God. Shavuot represents the mutuality of love expressed in the covenant at Sinai in which God pledged Himself to the people, and the people to God. (For a similar conclusion, reached by a slightly different route, see R. Meir Simcha of Dvinsk, Meshech Chochmah to Deut. 5:15. I am grateful to David Frei of the London Beth Din for this reference.)

Succot, on this reading, becomes a metaphor for the Jewish condition not only during the forty years in the desert but also the almost 2,000 years spent in exile and dispersion. For centuries Jews lived, not knowing whether the place in which they lived would prove to be a mere temporary dwelling. To take just one period as an example: Jews were expelled from England in 1290, and during the next two centuries from almost every country in Europe, culminating in the Spanish Expulsion in 1492, and the Portuguese in 1497. They lived in a state of permanent insecurity. Succot is the festival of insecurity.

What is truly remarkable is that it is called, by tradition, zeman simchatenu, “our time of joy.” That to me is the wonder at the heart of the Jewish experience: that Jews throughout the ages were able to experience risk and uncertainty at every level of their existence and yet – while they sat betzila de-mehemnuta, “under the shadow of faith” (this is the Zohar’s description of the succah: Zohar, Emor, 103a) – they were able to rejoice. That is spiritual courage of a high order. I have often argued that faith is not certainty: faith is the courage to live with uncertainty. That is what Succot represents if what we celebrate is succot mammash, not the Clouds of Glory but the vulnerability of actual huts, open to the wind, the rain and the cold.

I find that faith today in the people and the State of Israel. It is astonishing to me how Israelis have been able to live with an almost constant threat of war and terror since the State was born, and not give way to fear. I sense even in the most secular Israelis a profound faith, not perhaps “religious” in the conventional sense, but faith nonetheless: in life, and the future, and hope. Israelis seem to me perfectly to exemplify what tradition says was God’s reply to Moses when he doubted the people’s capacity to believe: “They are believers, the children of believers” (Shabbat 97a). Today’s Israel is a living embodiment of what it is to exist in a state of insecurity and still rejoice.

And that is Succot’s message to the world. Succot is the only festival about which Tanach says that it will one day be celebrated by the whole world (Zechariah 14:16-19). The twenty-first century is teaching us what this might mean. For most of history, most people have experienced a universe that did not change fundamentally in their lifetimes. But there have been rare great ages of transition: the birth of agriculture, the first cities, the dawn of civilisation, the invention of printing, and the industrial revolution. These were destabilising times, and they brought disruption in their wake. The age of transition we have experienced in our lifetime, born primarily out of the invention of the computer and instantaneous global communication, will one day be seen as the greatest and most rapid era of change since Homo sapiens first set foot on earth.

Since 9/11 2001, we have experienced the convulsions. As I write these words, some nations are tearing themselves apart, and no nation is free of the threat of terror. There are parts of the Middle East and beyond that recall Hobbes’ famous description of the “state of nature,” a “war of every man against every man” in which there is “continual fear and danger of violent death; and the life of man solitary, poor, nasty, brutish and short” (Hobbes, The Leviathan, chapter X111). Insecurity begets fear, fear begets hate, hate begets violence, and violence eventually turns against its perpetrators.The twenty-first century will one day be seen by historians as the Age of Insecurity. We, as Jews, are the world’s experts in insecurity, having lived with it for millennia. And the supreme response to insecurity is Succot, when we leave behind the safety of our houses and sit in succot mammash, in huts exposed to the elements. To be able to do so and still say, this is zeman simchatenu, our festival of joy, is the supreme achievement of faith, the ultimate antidote to fear.

Faith is the ability to rejoice in the midst of instability and change, travelling through the wilderness of time toward an unknown destination. Faith is not fear. Faith is not hate. Faith is not violence. These are vital truths, never more needed than now.