Honest doubt can be more powerful than dishonest faith 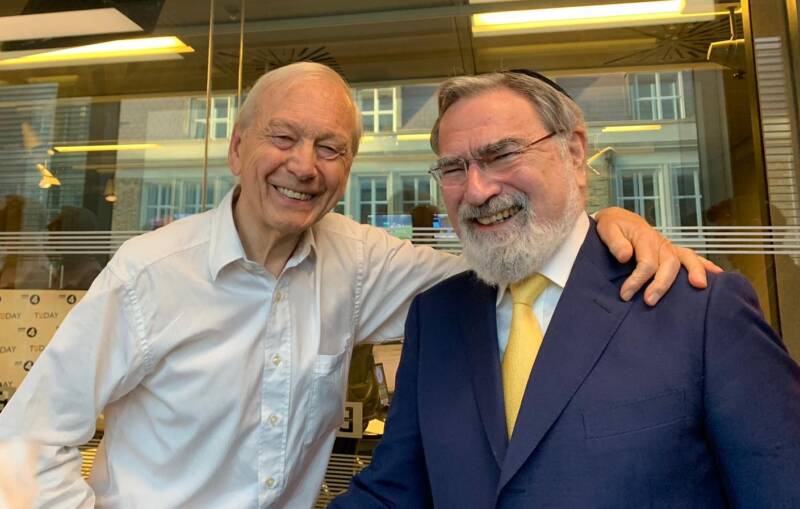 Among the contributions of Judaism to the world were the prophets of ancient Israel: Elijah, Isaiah, Jeremiah, people who had the courage to speak truth to power and hold power accountable to truth. It didn’t make them popular. As King Ahab said to Elijah, who accused him of abusing his office: Is that you, you troublemaker of Israel?

We don’t have prophets nowadays. But if we did, one place you’d probably find them would be the Today programme, because Today’s tough interviewers are recognisably in that tradition of holding power accountable to truth. And among them, for me and very many others, John Humphrys has been one of the best of our time.

What’s made John distinctive has been his fearless moral passion and his refusal to be fobbed off with evasions and equivocations. He’s been called “Radio’s Rottweiler” and the BBC’s “scrappy, scruffy mongrel terrier… chasing every rabbit, catching every ball, leaping on the grandest sofa with mud on his paws and a bark of amused defiance.” I’m sure some contemporary King Ahabs have looked at John and thought: Is that you, you troublemaker of Britain? But he’s been called the listeners’ champion, because he’s asked the questions we’d like to ask but don’t get the chance to. To do that for 32 years without loss of energy or integrity is quite something.

The last thing John would ever compare himself to would be one of the Prophets of the Bible. After all, he coined the phrase, “in God we doubt.” But there is something sacred in holding power accountable to truth. And in an age of viral videos, fake news, manipulated media, and uncheckable information on the Internet, truthfulness is in short supply. Lose truth, and you lose trust, and without trust, the fabric of freedom starts to fray.

I never did persuade John to reconsider his doubt, but he’s taught me that honest doubt can be more powerful than dishonest faith, especially when it leads you to ask the powerful the questions they don’t want raised. One of your colleagues, John, called you a national institution. To which you replied, “That makes me sound like Queen Victoria’s commode.” So I won’t go anywhere near that territory. I’ll simply say, you never let us forget the moral dimension of politics; you never let our leaders off the hook; you carried on the great tradition of speaking truth to power; and British breakfasts will never be the same again.