discussing ‘Not In God’s Name’ 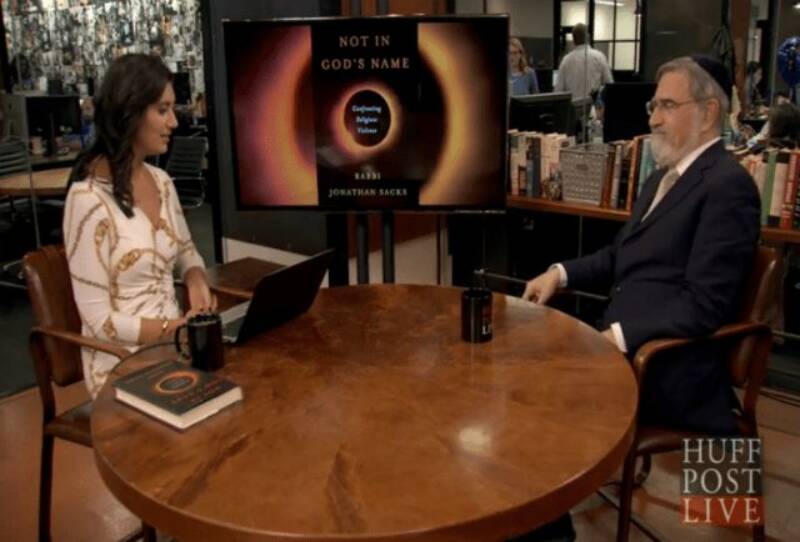 Rabbi Jonathan Sacks, the UK’s former Chief Rabbi and author of more than 25 books, joins HuffPost Live to discuss his latest book, Not In God’s Name, which highlights the challenges of confronting religious violence in the modern world.

This interview originally aired in the United States and online on 13th October 2015, during the US book tour.

Religious zealots fill newspapers and screens with bloody images of bombings and beheadings. They kidnap children and make them into soldiers. They pray before they rape women.

But these things are done “not in God’s name,” says Rabbi Lord Jonathan Sacks, the former Chief Rabbi of Great Britain, who just published a book by that title.

“The greatest threat to freedom in the post-modern world is radical, politicized religion,” Sacks writes. Religion News Service asked Sacks how people can kill in the name of God, and how religion can counter religious extremists. The interview has been edited for length and clarity.

In the video, this religious Rabbi also discussed his feelings towards aetheists. “I love them,” he said of non-believers. “I call them His Majesty’s loyal opposition. I don’t know if that phrase translates into America, but you get the point.”

The Rabbi said that non-believers pose questions that that can trouble the faithful, including himself. “Why did God invent atheists? To stop religious leaders from getting too big-headed, to challenge us,” he noted.

“[They may ask] ‘If God exists, how come there’s so much suffering in the world?’ An atheist tells me that and I can’t sleep at night, because it’s a good and valid point.

“But the truth is, you don’t have to be an atheist to say that, because Abraham and Moses also said it,” he added.

Q: You write that the world is moving into a more religious age, and that this is not necessarily a good thing. Why?

A: Ours is an age of unprecedented radical change, and people search for something that doesn’t change, that is eternal. And of all such things, God is the ultimate. And there is a specific factor in the Middle East, Africa and Asia, and that is the perceived failure of Western regimes. That is leading to a whole series of religious counterrevolutions. That’s what’s happening in Iraq and Syria. It’s what happened in Iran. To some extent it is happening in India with Hindu nationalism.

Q: “Not in God’s Name” examines Torah stories to show how even violent biblical episodes teach love toward the stranger. You want this exercise repeated with other sacred texts, but not by you. Why?

Q: You note in your book that those committing the worst atrocities in the name of religion often know little about their own faith and care less about the faith of others. They’re not reading your book, so who did you write it for?

A: This book is meant to encourage a recruitment and inspiration of a new generation of religious leaders — Jewish, Christian, Muslim, Hindu, Sikh, you name it – who will lead the great faiths a generation from now in such a way that they make space for one another, in coexistence and mutual respect. This book is a long-term call to all the faiths, to make space for the religious “other.” It’s not a quick fix. There is no quick fix.

Q: Speaking of the “religious other,” you tackle the concept within the book in terms of sibling rivalry, in particular with the story of Jacob and Esau. Why focus so much on sibling rivalry and how it plays out on the world stage?

A: I was looking at the very roots of human violence. The two people who have had the most profound insight in the 20th century were Sigmund Freud and Rene Girard. Girard’s book “Violence and the Sacred” was a very prophetic work. It appeared in the 1970s, and he predicted that religion and violence would both continue into the future. Both Freud and Girard point to sibling rivalry as a real driver of human violence. Freud thought that the No. 1 driver was the hostility of sons toward their fathers. But if you look through world literature, you’ll see that sibling rivalry is much more significant – in Egyptian myth, Greek myth, the Roman story of Romulus and Remus, or the Hebrew Bible itself. If you were to rid the world overnight of religion, there would still be violence.

Q: This week marked the 50th anniversary of Nostra Aetate, the Vatican document that decried anti-Semitism and promulgated a more brotherly relationship between Catholics and Jews. How has Pope Francis modeled engagement with other faiths?

A: Francis has acknowledged the spiritual contribution of Judaism to the world more affirmatively than any previous pope. And Nostra Aetate has shown how centuries of estrangement and hostility can be reversed, by one single, generous gesture within a faith. That for me is a great signal of hope. If it can happen between Catholics and Jews, then it can happen between Christians and Muslims, and between Jews and Muslims. But it will take really open leadership that understands that what God is calling us to in the 21st century is something very challenging and very new.

Q: Does Judaism need its own Pope Francis, somebody who can model this faith? Does Islam?

A: We need that in every faith and we need it very seriously. In 1942, one of the darkest periods of human history, in Britain Archbishop of Canterbury William Temple and Chief Rabbi of Great Britain Joseph Hertz formed the Council of Christians and Jews. That was a signature gesture at a very crucial period. I think the Dalai Lama today has shown likewise. It is a matter of personal humility and the generosity of your embrace.