Interview with The Jewish Week 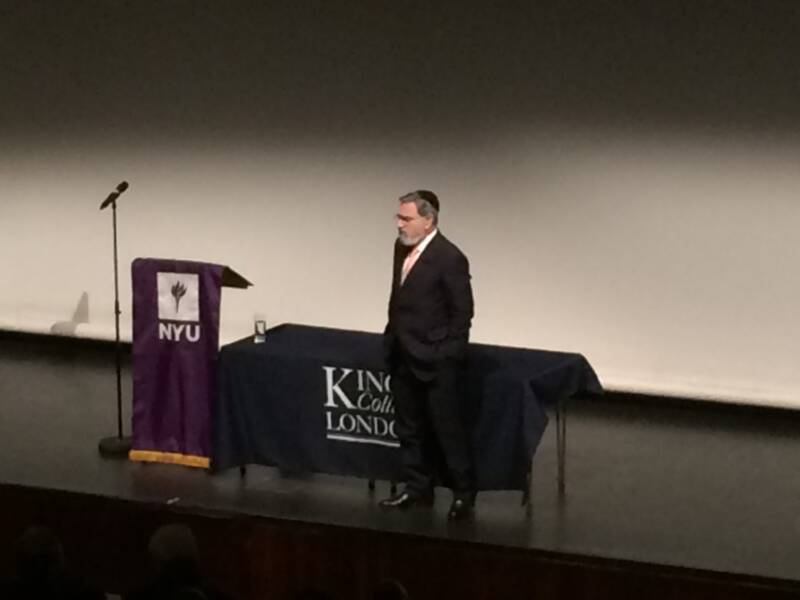 Written by Amy Sarah Clark. Published in The Jewish Week on 15th January 2014

When he steps to the head of the class later this month at New York University and Yeshiva University, former British Chief Rabbi Jonathan Sacks likely won’t be shying away from controversy. At NYU, where he’ll teach a graduate-level course on “Jewish Leadership in a Secular Age,” and at YU, where his undergraduate course will focus on Judaism and political theory, he says he’ll hit some touchy issues — his argument that American society is better aligned with Jewish principles than Israeli society, and the “inward” turn of traditional Jews.

Rabbi Sacks, of course, is no stranger to controversy, having had a number of run-ins with British Rabbis to his right for being too liberal and garnering criticism from the left for such stances as his opposition of civil unions for gay and lesbian couples. But teaching has been a constant in his life, and the joint NYU-YU appointment gives him a new bully pulpit, so to speak.

“’Rabbi’ means ‘my teacher.’ It’s my passion in life. It’s the oxygen I breathe,” the 65-year-old Rabbi told The Jewish Week in a telephone interview late last month. “I think we have very powerful things to say to young Jews around the world.”

At NYU, Rabbi Sacks, who has a doctorate in philosophy from King’s College in London, will teach a six-week graduate course focusing on principles of Jewish leadership such as its high value on learning and the belief that trying to fix the world’s problems is not only a responsibility but also an act of serving God in itself.

At YU, Rabbi Sacks is co-teaching the class with Rabbi Meir Soloveitchik, director of YU’s Straus Center for Torah and Western Thought and Rabbi of the Upper West Side’s Shearith Israel. The course, aimed at undergraduates, examines the intersection of Judaism and political theory — including Rabbi Sacks’ belief that the United States’ political structure more closely follows principals of Judaism than that of Israel. He will serve as the Kressel and Ephrat Family University Professor of Jewish Thought.

“When we read the history of political thought, Jews don’t figure into it… But Judaism has a distinctive political theory,” he said.

While most liberal societies are based on the idea of a “social contract,” giving the state power to rule, Judaism also has a “social covenant” – an agreement to form a civil society of mutual support among all its inhabitants.

In the modern world, he said, “there is only one analog [for a social covenant] the United States, because the Declaration of Independence is like a covenant. ‘We the people,’ is a sign of a covenant society… Israel needs to absorb these ideas.”

Another issue that will be addressed in the YU class is Rabbi Sacks’ deeply held belief that Jews need to engage more with the world — not through talking (read: interfaith dialogue), but rather by doing. “Social action gets people working side-by-side,” he said.

“I would love to see people really standing up and being proud of Judaism, being successful in politics, but also being a role model in Jewish values, lifestyle,” he said.

“One of the things I like to do in Britain is to take the Jewish voice right into the public square. I did not find my faith diminished by that by one inch.”

“The Jewish community also needs to repair the deepening divide between religious and secular Jews,” he said.

He should know: the former Chief Rabbi has been a lightning rod for this divide — especially after the publication of his 2002 “The Dignity of Difference.” He was pummelled first by the Orthodox wing for writing that God speaks to Christians and Muslims through their religions as well as to Jews, and then by Liberal Jews for revising the passage in the second edition.

Thirteen years later, Rabbi Sacks stands by his decision, saying publication of the first edition was rushed in order to come out on the one-year anniversary of 9/11.

“The Dignity of Difference’ went to the publication without the proper proofreading,” he said. “I would normally have made the changes in the course of the editing. Those minor changes – all of which I agree with personally – were never an issue of principle,” he added. “It was the biggest fuss over the smallest issue I had ever seen.”