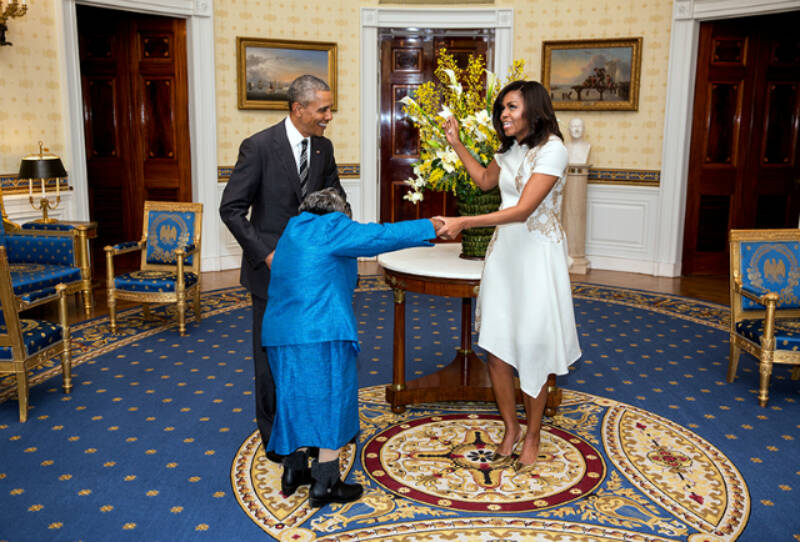 For me the most magical moment in this week’s news was the sight of a 106 year old woman, Virginia McLaurin dancing with Barack and Michelle Obama in the White House. There she was, radiant with excitement like a child; thrilled to be in the White House, thrilled in American Black History Month to be holding hands with a black President and First Lady after all that history of slavery and suffering. It was glorious. And other people thought so as well because 60 million have watched the video. How do you get to be that old and stay that young?

The best answer I know is at the end of the book of Deuteronomy. The Bible says about Moses that at the age of 120, “his eye was undimmed and his natural energy unabated.” I used to think that these were just two descriptions, until I realised that the first was the explanation of the second. Why was his energy unabated? Because his eye was undimmed. Because he never lost the ideals of his youth, his faith in justice and his belief that his people could emerge from slavery and, inspired by God, write its own chapter in the history of the human spirit.

And despite all the setbacks, despite the fact that a journey that should have taken days took decades, he never became cynical or disillusioned, never lost hope, never stopped journeying toward the Promised Land.

A few months ago, Lord Weidenfeld died at the age of 96. He too stayed active almost to the very end with plans to bring peace to troubled parts of the world. On his 92nd birthday he was interviewed by a journalist who said, “In their nineties, most people think about slowing down. You seem to be speeding up. Why is that?” He replied, “When you get to be 92 you see the door beginning to close, and I have so much to do before it closes that the older I get, the harder I have to work.” That’s how he stayed young.

It isn’t always possible; we get frail, the body ages, the mind fades. But while we can, let’s live the life of the spirit to the full. We are as young as our ideals.  Never lose faith; never lose hope; never close your mind to wonder. And when the President asked Virginia McLaurin for the secret of being able to dance at 106, she didn’t reply; she danced. “Just keep moving,” said the First Lady with a smile.