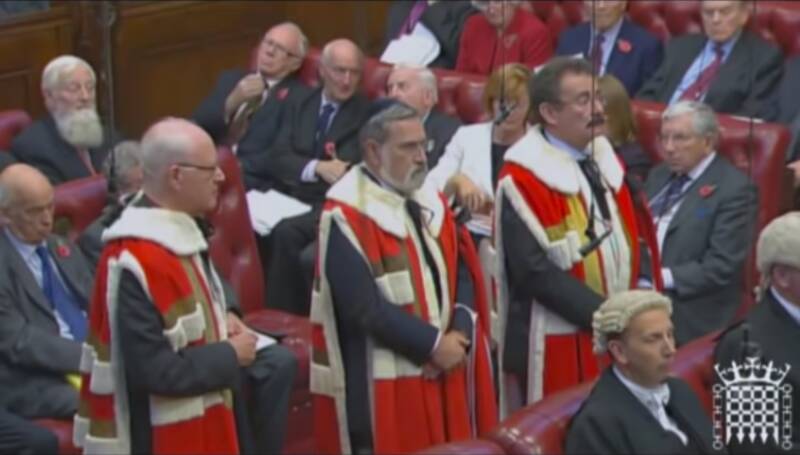 On 26th November 2009, Chief Rabbi Lord Sacks gave his maiden speech in the House of Lords.

My Lords, when I entered this chamber for the first time, I did so from the Moses Room, and I thank my Lordships for the lengths they went to make a Rabbi feel at home.

Today I feel the other side of that occasion, for it was Moses at the Burning Bush who felt so overwhelmed by emotion that he told God he could not speak; he was “not a man of words.” Mind you, that did not stop him speaking a great deal thereafter. In fact on one occasion, when pleading with God to forgive the people for making the Golden Calf, he spoke for forty days and forty nights.

However, on another occasion, when asking God to heal his sister Miriam, he limited himself to a mere five words. I am told by your Lordships that, when making a maiden speech, it’s better to err on the side of the latter than the former; and that I will try to do.

The powerful emotion I feel today is simply explained. My late father came here as a child fleeing persecution in Poland. My mother’s family had arrived here somewhat earlier. And the love they felt for Britain was intense.
It took me a while to understand it, but eventually I came to realise what so many Jews in Britain know in their hearts and their very bones, that had it not been for this country, their parents or grandparents would not have lived and they would not have been born.

That visceral sense of indebtedness is what made Jews in this country want to give back, to contribute to society as a whole, which they did with all their heart. They contributed to its arts and sciences, its law and medicine, its business and finance, its armed forces and its public life, its charities and voluntary associations. And they wanted us to do the same, to be proud of being British and proud of being Jewish, seeing no contradiction between the two but on the contrary, a mutual reinforcement. And I believe the same is true for other minority groups in this country.

My late father had to leave school at the age of 14 to help support the family, and he wanted us, his four sons, to have the education he lacked. And for that too I am deeply grateful. We were able, all four of us, to go to university, the same university that educated a foreign secretary of Israel, Abba Eban, who began his speech, when he returned there many years later to receive an award, with the words: “It was here that I learned the honesty, integrity and love of truth that have been such a disadvantage to me in my political career.” I too learned lessons there that I will never forget. I was religious, my doctoral supervisor, the late Sir Bernard Williams, was Britain’s most intellectually gifted atheist. Yet never once did he deprecate or even challenge my religious faith. For we were both equal participants in that collaborative pursuit of truth that Judaism’s Sages, long ago, called “argument for the sake of heaven.”

And it is this that I have rediscovered in your Lordships’ house. What extraordinary things happen here. When somebody speaks, other people listen. When people disagree, they do so politely. What special gifts these are in this age of clashing soundbites, diminishing attention spans, angry voices and gladiatorial politics. And I hope that, whatever constitutional changes are in store for this house, those things will always be preserved. For what I have found in your lordships’ house, and what I learned at university, are the foundations of the virtues that made Britain the country my parents loved: its tolerance, its decency, its undemonstrative yet indomitable sense of fairness and justice.

And with this I come to my point. Democratic freedom is not just a matter of political arrangements, of constitutions and laws, elections and majorities. It depends too on what Alexis de Tocqueville called “habits of the heart”: on civility, the willingness to hear the other side, respect for those with whom you disagree, and friendships that transcend the boundaries between different parties and different faiths. And those things must be taught again and again in every generation.

If there is one insight above all others to be gained from Jewish history it is that freedom depends on education. To defend a country you need an army but to defend a civilisation you need schools. Abraham was chosen, says the Bible, so that he would teach his children to practice righteousness and justice. Moses commanded, in what has become the most famous of our prayers, “You shall teach these things diligently to your children.” In ancient times the Egyptians built pyramids, the Greeks built temples, the Romans built amphitheatres. Jews built schools. And because of that, alone among ancient civilisations, Judaism survived.

Sadly today, schools have to fight against a culture that sometimes overvalues material success. Some years ago I visited a school many of whose children came from very affluent backgrounds. They told me that, the previous week, an inspector had visited the school and tested the children – they were 7 or 8 years old – on their vocabulary. He asked them: who can tell me the meaning of the word “economy”? One child put up his hand and said, “Please sir, that’s where the other people sit on a plane.” Thankfully such things are rare.

Therefore, with your Lordships’ permission, I simply wish to say: let us value our teachers, celebrate our schools, keep education at the top of our priorities, and we will raise a generation of British children who will make us proud.