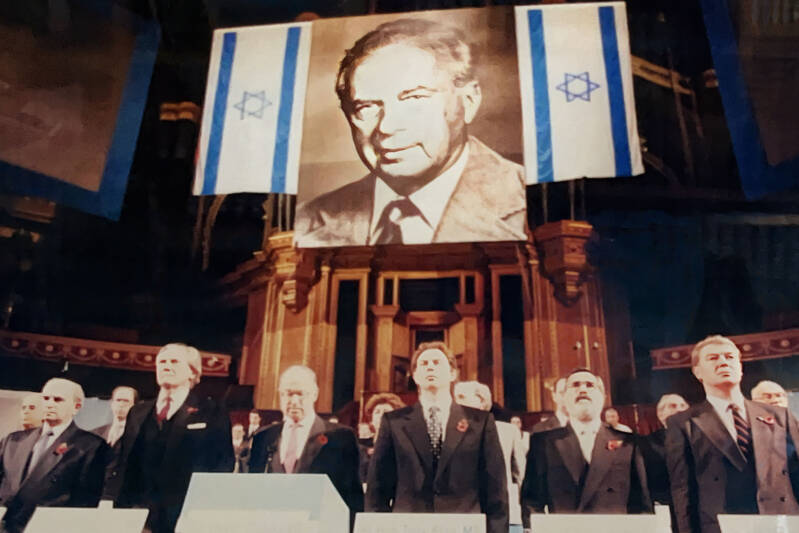 This address was delivered by Rabbi Sacks on 12 November 1995, eight days after Yitzhak Rabin’s assassination in Tel Aviv, at the communal memorial event at the Royal Albert Hall.

When we comfort mourners we say Hamakom yenachem etchem betoch sha’ar avelei Tzion viYerushalayim: “May the Almighty comfort you among all other mourners in Zion and Jerusalem.” And for the past week those words have been literally true, for we have all been stricken by grief. Not in my lifetime has the death of a single individual sent such a tremor through Jewish hearts. We have lost a leader of Israel, one of the great leaders of the world, and we are bereaved.

Three thousand years ago King David said these words: Halo tede’u ki sar vegadol nafal hayom hazeh beYisrael. “Do you not know that a prince and a great man has fallen this day in Israel?” And today those words echo in our minds, because Yitzhak Rabin was more than the Prime Minister of Israel. He embodied the very spirit of Israel, a brilliant soldier who hated war, a man of battle who longed for peace.

He began young, as so many of his generation did; and for more than forty years he dedicated his life to the defence of Israel and the service of his people. And at the age of threescore years and ten, when anyone might justifiably have said, “I have done enough”, he began again. But this time he faced his toughest task, his hardest challenge, the greatest campaign of them all.

Nothing he had done until then, not his defence of Jerusalem in 1948, not his leadership, as Chief of Staff, of the Six Day War, not his decision to mount the raid on Entebbe, was more demanding of courage than this. Because Yitzhak Rabin, who had led his country in war, now became Yitzhak Rabin who set himself to lead his country away from war. He whose home had been the field of battle now began that most difficult climb of the high mountain of peace.

The peace process meant taking two great risks. It meant holding out the hand of friendship to those who had been the sworn enemies of Israel. And it meant risking deep divisions within Israel itself. He knew the dangers, and yet he went ahead. He did so because he had the character we call gevurah, which means the courage to wage war when necessary, and the courage to make peace when possible. That was how he lived all his life, and that is how he will be remembered.

Because this was a man who felt in his bones the Jewish imperative of shalom. He knew that the willingness to make peace is a sign not of weakness but of strength. And in the minds of most Israelis it was only Yitzhak Rabin, the hero of so many battles, whom they could trust to take the risk.

But what most struck me about him was that this was no remote politician concerned only with peace in high places. What drove him was the suffering of ordinary Israelis, the human face of war: the parents he had to comfort because their sons lay dead; young children who asked, where has abba gone; mothers weeping for lost sons. He had seen too much killing, too many victims, too many grieving relatives, too many tears, and they entered his soul making him vow to build a Middle East where future generations would no longer grow up surrounded by hostility and fear. And when, on Monday in Jerusalem, we heard his granddaughter say, shalom, gibor Yisrael, “Goodbye, hero of Israel”, we felt the sudden pain of what we had lost.

But we grieve not only because he has died, but also because of the way that he died. Yitzhak Rabin died because even though his own security advisers warned him of the risk, he believed with perfect faith that a Jew would not kill another Jew. And it is that faith which now lies in ruins. For let us make no mistake about the tragedy that has befallen our people. Did we not know throughout our long and troubled history that the greatest danger facing the Jewish people was not our enemies, but ourselves? Did the Sages not say, two thousand years ago, that Jerusalem was only destroyed because of sinat chinam, the hatred between Jew and Jew?

It is an axiom of Judaism that when tragedy occurs in the life of our people we begin the process we call repentance. We do not engage in mutual recrimination. We engage in collective self- examination. And that must now begin. For months before Yitzhak Rabin died the warning lights were flashing. The positions taken were growing more extreme. We began to hear the rhetoric of hate. And what was worst of all, some of those voices were religious voices, and what they said, and what they led to, make me hang my head in shame. As Chief Rabbi I solemnly say: the Judaism I love is not a religion that teaches people to hate one another, that excuses violence, that expresses disdain for the rule of law. The Judaism I love is the faith that first taught the world the sanctity of life and the religious value of peace. The Judaism I love is the one which, in the words of Maimonides, brings not vengeance into the world but love and compassion and peace into the world. And that must be the Judaism we now live.

Today I call on religious leaders to begin healing the terrible wound that has opened up in the heart of our people. For if we do not, I fear that the bullet that broke Yitzhak Rabin’s body will enter the Jewish soul.

But let us remember this: that of all people, Yitzhak Rabin knew how to comfort the afflicted. Which of us who were privileged to be with him on his last visit to this country will forget how he spoke to us of the hours he had spent with the parents of a young man who had been taken hostage, giving them the strength to survive their terrible ordeal.

And if he were with us now, we know what he would say. Od lo avdah tikvatenu, our hope is not destroyed. A leader lies dead, but his memory lives and his vision is still before us, urging us to continue what he began. In the last years of his life, he opened a door in a wall of old and bitter hatreds. His death must now open another door. The courage he showed in the relationship between Israelis and Palestinians, we must now show in the relationship between Jew and Jew. For what will we have gained if we make peace with our enemies and fail to make peace among ourselves?

In this dark world, one man lit a candle of peace, and we must turn it into an everlasting flame. Let that be Yitzhak Rabin’s legacy to us and our memorial to him. Yehi zichro baruch. May his memory always be a blessing.