My legacy? A community that is able to walk tall (The Jewish Chronicle) 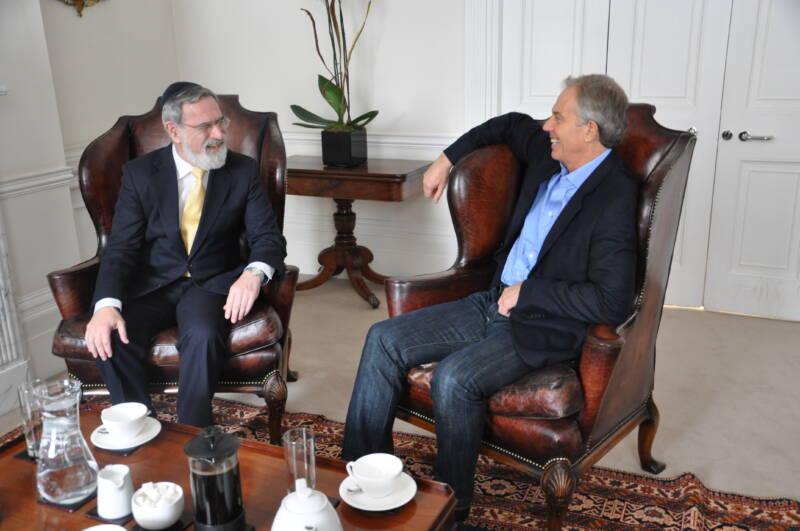 The floor of the lounge where Chief Rabbi Lord Sacks has received Prime Ministers, Archbishops, VIPs from far and wide and myriad communal representatives in countless receptions, is now awash with books.

As he prepares to leave office in just over a fortnight, he is having to reduce his large personal library before moving from the official residence he has occupied in St John’s Wood for the past 22 years to live in Golders Green.

Many had thought he would have been tempted by an academic post following the rabbinate. Indeed, he had some “terrific offers” even before he became Chief Rabbi. But he is not retiring to the cloisters of campus. “I am not an ivory-tower person,” he said.

And he is certainly not taking a break. “I did not think I would get a book written in summer, but I did,” he said – to add to the one-a-year timetable he achieved during his period in office. A heavy schedule lies ahead.

The next phase of his career will see him as a kind of roving Jewish educator, visiting communities on a mission “to inspire new generations of young Jewish leaders”. He and his small team will be based in offices at St John’s Wood Synagogue, funded by a new trust supported by senior British Jewish figures.

He will not reveal its initial budget other than its being “lean and mean”. But he hopes that, in two years, the trust will be self-funding through his speaking and teaching engagements.

Those engagements will involve time in Israel and America and an autumn trip is already lined up to Spain. “We know, in the end, that if you want to touch people, you can’t just do it by books or by YouTube videos,” he said. “They have got to have the chance of meeting you.”

But one destination not yet on his itinerary is the Limmud winter conference, which he avoided as Chief Rabbi. “I seriously haven’t given it a thought,” he said. “I just haven’t. We’re into new engagements, not old ones. I am first and foremost keen to leave the arena clear for my successor.”

The accolades he has received over the past few months from Prince Charles downwards attest to his national impact as a religious leader who has contributed a Jewish voice to the issues of the day. Judaism in Britain today enjoys a higher profile in the public square. “I wasn’t the first person to do it, but I think I have taken it a long way,” he said.

Only this week The Times devoted its front page to his criticism of the government for not doing enough to help married couples in the tax system.

He was not taking political sides, he stressed to the JC. His comments reflected a long-standing concern with the social consequences of marital breakdown. If religion gets embroiled in party politics, it “becomes a divisive not a uniting force”.

He added: “I have always been close to the leaders of all three major parties in Britain. So I try and choose topics that are not subject to party political division.”

Family breakdown is “absolutely not a party political issue. It is an issue where you have to have the courage to say things that are not politically correct.”

All four Prime Ministers during his chief rabbinate (John Major, Tony Blair, Gordon Brown and David Cameron) were ready to sit and discuss moral issues with him, knowing that he was “not going to try and pressure them into specifics of legislation”.

The only time he would get involved in the nitty-gritty of legislation, he said, would be in “defending shechitah and brit milah and alerting political issues to the real dangers of antisemitism in Britain and in Europe generally”.

He may well attend the [House of] Lords more often in future, but “not immediately”.

The willingness of others to listen to Jewish ideas comes with a more outgoing British Jewry. “I think we are much more active, exuberant, self-confident, than we were,” he said. “I think you see the signs of that everywhere from JW3 [the new London community centre], to lighting Chanukah candles in Trafalgar Square, to doing Sefer Torah dedications dancing through the streets in the suburbs.

“I wanted to be part of an Anglo-Jewry that had the confidence to wear its identity with pride. That, deep down, is the ultimate issue. The schools are the means. But the end is to walk tall as Jews and to realise that we have a role to fulfil.”

That role can be summed up by the title of his book on social responsibility, To Heal a Fractured World.

“I tried to show that Judaism has a role to play in the world and I think that is the only way I can do justice to the nature of Jewish history. I think all our ancestors had that faith but they never had the opportunity. We now have the opportunity,” he said.

“I have tried to break through this horrific dichotomy that Jews have been faced with ever since the Enlightenment and emancipation – that either you go into the world and give up being Jewish or stay strongly Jewish and give up going out into the world.

“If the only Judaism that people see 50 years from now are Jews who are deeply segregated, then I think we will lose many Jews we never needed to. I am not critical of anyone. I am just saying our section of the Jewish community has to have the courage to make its case forcefully.

“I think, in Britain, we have shown it can be done. We have strengthened the standing of the Jewish community in the wider society at the very time that we have trebled the number of [Jewish] day school places.

“You don’t see a community change its character that much in the space of a single generation that often. This has been a genuine communal achievement.”

Among the changes he has seen are more child-friendly synagogues. “I remember when I first started giving sweets to the children [in synagogue],all the kids would run up and people would say ‘what about decorum?’. That’s the only time I ever pulled rank as Chief Rabbi.”

When he reaches the gates of heaven and is asked what qualifies him for admission, “I will not say I was Chief Rabbi, I will say I gave sweets to the children – may the dentists forgive me!”

If there is anything he would have done differently during his tenure, he will say only that,

“I don’t think there is a single thing where we didn’t learn a lesson from it… The more storms you weather, the stronger you get and the gentler you get”.

Compared to his earlier years in office, relations between Orthodox and non-Orthodox seem far more harmonious. But while some fear that the inter-communal debate over Israel has grown more intemperate, he believes that is not so.

By American Jewish or Israeli standards, “we remain very mild by comparison”, he said. Watching CNN in hotel rooms abroad, he would sometimes watch two Jews having an argument and tell his wife Elaine “that would be fine in the back of the shul but I don’t necessarily want to see that on CNN broadcast around the world.” But he acknowledges that people can more easily vent their spleen through the internet.

“The essence of Judaism was it was face-to-face argument. You sit in yeshivah and you argue. The Gemara says when they sit down and learn together, even a father and son, even a Rabbi and disciple, become enemies to one another. But they do not move from there until they reach a point of loving one another. That was the essence of face-to-face communication, you can have these arguments, but part as friends.

“But blogs, texts, tweets and that whole internet phenomenon allow you to be quite vicious without ever seeing the person you are being vicious towards. When that happens, you have no natural constraint.”

Generally, he believes that legislation should be used more readily to curb electronic hate speech and that websites should not allow people to post comments anonymously.

The internet “magnifies” both the good and bad in people, he said. Websites like Wikipedia speak to people’s altruism, adding to the store of knowledge for free.

Few spiritual leaders have embraced the net so readily: his new book, a set of essays on leadership based on the weekly Torah portion, will be available by email via his own site, as is already his latest pamphlet, A Judaism Engaged With the World.

The internet is the “most potent” advance since the invention of printing but its impact was not foreseen. Indeed, he believes “the really big things in our time were not foreseen” or anticipated only by a few: 9/11, the end of the Cold War, or the rise of radical political Islam.

If we are now living in “very uncertain times”, he believes that Judaism remains well-equipped to respond.

“I think one of the most powerful things about Judaism – and what I mean when I say that it takes no courage to be an optimist but it takes a very great deal of courage to have hope — is that we know what it is to live with uncertainty.

“Our ancestors who lived in this country 800 years ago did not know if their grandchildren would still be here or not. The same was true for Jews in Germany and France and Spain and Portugal, they did not know what tomorrow may bring.”

But they had access to a spiritual resource, typified by the forthcoming festival of Succot, when we leave the security of solid walls for a temporary shelter and celebrate it as “the season of our joy”.

“This is the single most important message Jews have for the world in the 21st century – the state of Israel has lived it for 65 years; you can live with uncertainty and yet do great things and yet celebrate life and yet, dare I say it, sanctify life. And I think the more uncertain the world gets, the more the world needs a Jewish message.”