A New Movement Against Religious Persecution 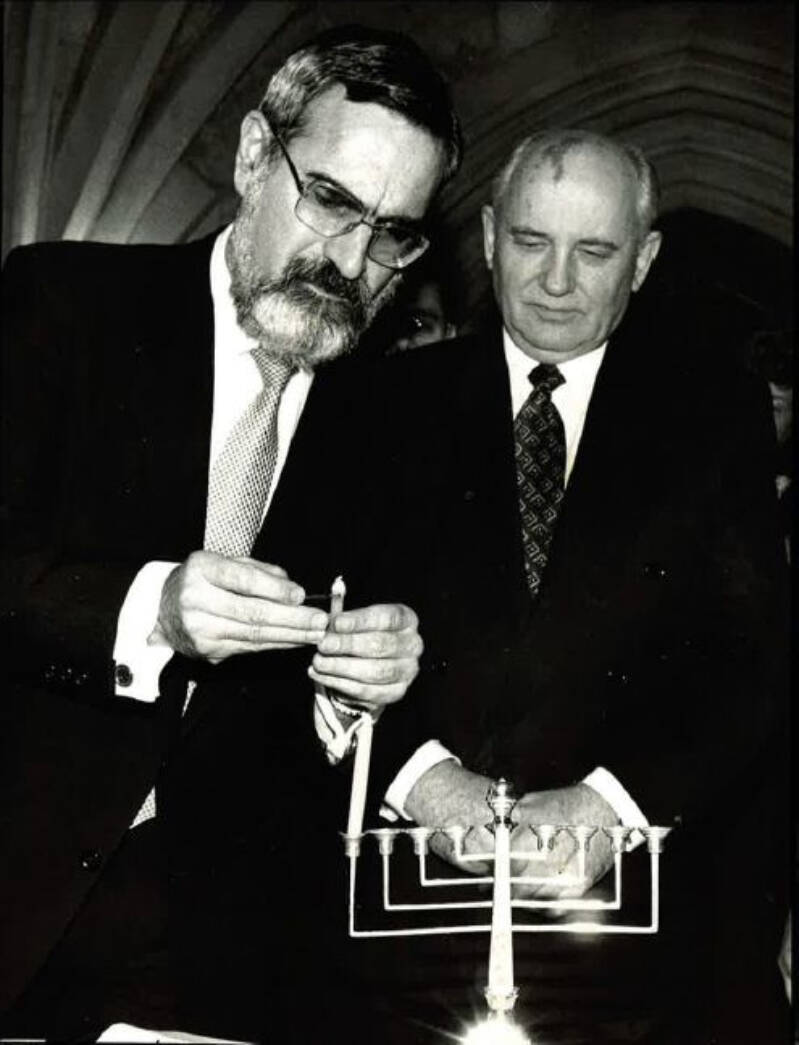 Published in The Wall Street Journal on 12th December 2014

In 1991, I lit Hanukah candles with Mikhail Gorbachev, then President of the Soviet Union. After the ceremony he asked, through his interpreter, what we had just done—what was the meaning of the ritual? I asked the interpreter to tell him that more than 2,000 years ago, under a repressive government, the Seleucid Greeks, Jews fought for the right to practice their faith in freedom. “My people won,” I said, “and ever since we have performed this ceremony in memory of that event.”

I then noted that for 70 years after the Russian Revolution, Jews also lived under a repressive government in the Soviet Union and were not allowed to practice their faith. “You gave them back their freedom,” I said, “so you too are part of that story.”

As the interpreter translated my reply, President Gorbachev blushed. He had recently made history with the dissolution of the Soviet Union, but I guess he wasn’t accustomed to praise for the significance of his actions resonating quite that far back. It was true, though: He had liberated Soviet Jews from silence, and the Jews at that Hanukah celebration felt it. For Jews world-wide, it was one of the high points of recent history.

But of course those were remarkable days for millions of people. As the Berlin Wall fell a quarter-century ago, Soviet communism imploded and the Cold War came to an end, Francis Fukuyama’s “The End of History” made thrilling sense. The era of ideological conflict was over. The last great secular ideology, communism, had failed. What had succeeded were liberal democracy and market economics, neither of them ideological, simply systems for liberating the energies of individuals and allowing them to live peaceably and creatively together despite their differences. Adam Smith and John Stuart Mill turned out to be greater prophets of the human spirit than Karl Marx.

Rarely has a dream been so rudely interrupted. Already in 1991 the Bosnian conflict had flared, and it was this event that was to prove the shape of things to come. Bosnians who had lived together for decades found themselves, under the toxic leadership of Slobodan Milosevic and Radovan Karadzic, divided along ethnic and religious lines. Three years later in Rwanda came the massacre of Tutsis by Hutus. Tribalism had returned with a vengeance.

Religious freedom has been the casualty of the new global disorder. There is an onslaught against Christians in the Middle East, who are being butchered, crucified and beheaded in Syria and Iraq, and persecuted and threatened in sub-Saharan Africa, Iran, Pakistan, Indonesia, and elsewhere. Muslims are dying at the hands of their fellow Muslims across the Sunni-Shiite divide. Bahai are suffering persecution in Iran and Egypt, Buddhists in Vietnam, Myanmar, and China, and Hindus in Pakistan. And within living memory of the Holocaust, anti-Semitism has returned to Europe.

According to the Religious Freedom in the World Report 2014 by the Catholic Church’s Aid to the Church in Need organization, freedom of religion has deteriorated in almost half the countries of the world, and sectarian violence is at a six-year high. Yet freedom of religion is one of the basic human rights, as set out in Article 18 of the Universal Declaration of Human Rights. More fundamentally, it was the cause for which the modern world established the concept of human rights in the first place. Revulsion at a century of religious wars in Europe helped spur Enlightenment thinking about the social contract, the moral limits of power, and the centrality of human rights.

The challenge is simple and it is posed in the first chapter of the Bible. Can we recognize God’s image in a person who is not in our image; whose color, creed, or culture is not our own? When Hanukah begins on Tuesday evening, I will light the first candle and pray that the day may come when people of all faiths light a menorah together to celebrate a new festival of religious freedom, when we finally have learned to honor the brotherhood and sisterhood of humankind under the love and forgiveness of God.