Next year in Jerusalem – teaching children the story of their people 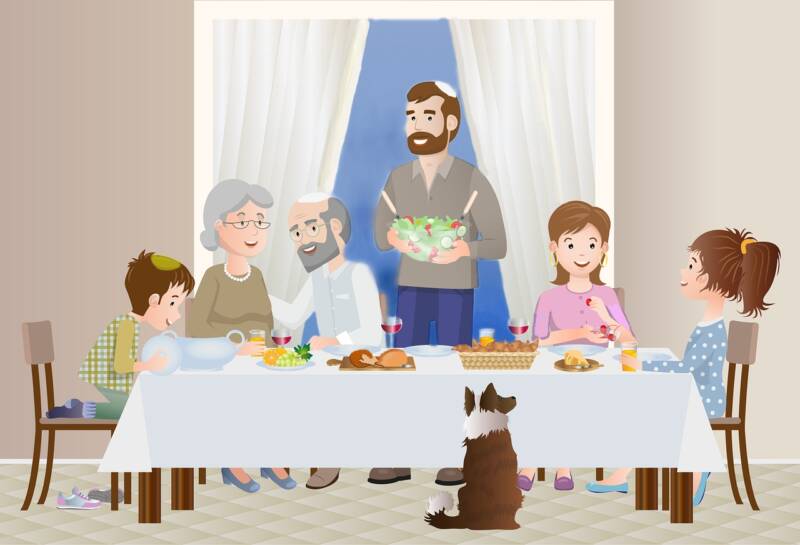 What are your earliest memories? Mine go back to my grandparents’ house, just opposite Finsbury Park in North London. In my mind’s eye I see the heavy Victorian furniture, the grandfather clock with its loud tick and quarter-hour chime, the bookcases crammed with encyclopaedias (my grandfather had a passion for self-education), and the huge dining table thronged with members of the extended family, uncles, aunts and cousins as well as my parents and grandparents.

I suspect something like this scene is lodged in the memory of almost every Jew. There was a time for each of us when, though we were the youngest at the table, we had the starring part. It involved saying or singing Mah Nishtanah, “Why is this night different?” with its four questions. Why are we eating unleavened bread? Why the bitter herbs? And so on. It was our introduction to the annual retelling of the story of Passover and our ancestors’ exodus from Egypt. We will be doing so again in the course of the coming week.

Has any ritual, I wonder, been practised longer than this, still conforming to the rules laid down by Moses some 33 centuries ago? And was there ever a deeper insight into the mysterious process of identity formation? At the age of 3, I was being inducted into a people and their history. Their story was about to become mine.

It is a narrative on the grandest of scales, a tale of slavery and liberation, exile and the long journey to the Promised Land. But the stroke of genius was to set this ritual not in the synagogue but in the home, and to focus attention on the youngest present. The whole evening is structured as a set of answers to questions posed by a child.

Was it this, I sometimes wonder, that gave Jewish identity its extraordinary tenacity? Many Christian thinkers, from Augustine to Pascal to Tolstoy, were intrigued by how this people, few in numbers, scattered and dispersed throughout the world, survived. The answer, I suspect, has much to do with the gifts of narrative and memory. We need a story to tell us who we are. And we need the handing on of memory across the generations. That is what Passover is about.

In Dharamsala, north India, in 1990, an unusual religious encounter took place. For more than 30 years the Dalai Lama had been in exile, together with many of his followers. There had been a brutal assault on Tibet, its population and religion. More than a million Tibetans were killed. Some 6,000 Buddhist monasteries were destroyed. It was clear that there was no imminent hope of return. The Dalai Lama realised that he and his people were faced with an unprecedented challenge: how to survive, their identity and faith intact, in a new land away from home. As he considered the problem, he realised that there was one people who had done just this: the Jews. So he invited a small group of American Jews to visit him in the hope that they might have the answer. The poet Roger Kamenetz, who was one of the group, tells the story in his book, The Jew in the Lotus.

Among their answers was: create a Buddhist equivalent of Passover. Tell the story of your people annually, beginning in exile and ending in hope. Teach it to your children. Give them the gift of memory and they will give you the gift of immortality. Some of the Dalai Lama’s followers had already anticipated this conclusion. They erected a banner in Dharamsala saying, “Next year in Lhasa”, as Jews for 20 centuries had said on Passover: “Next year in Jerusalem.”

The French philosopher Jean-François Lyotard once defined postmodernism as “the death of metanarrative”, meaning that we don’t have, or don’t need, the big stories any more — the ones that tell us who we are, where we came from, and what we are called on to do. I think he was wrong. Without memory there is no identity, and without identity we are cast adrift into a sea of chance, without compass, map, or destination.

This year I look forward to Passover with special anticipation to see if our first grandchild, now 2½ old, can ask the questions. Shameless sentimentalism, I know. Yet I cannot suppress the thrill I feel when I hear her say her first Hebrew words and see our ancient story reborn in the mind and memory of a child.