Our world risks a ‘return to Dark Ages’ 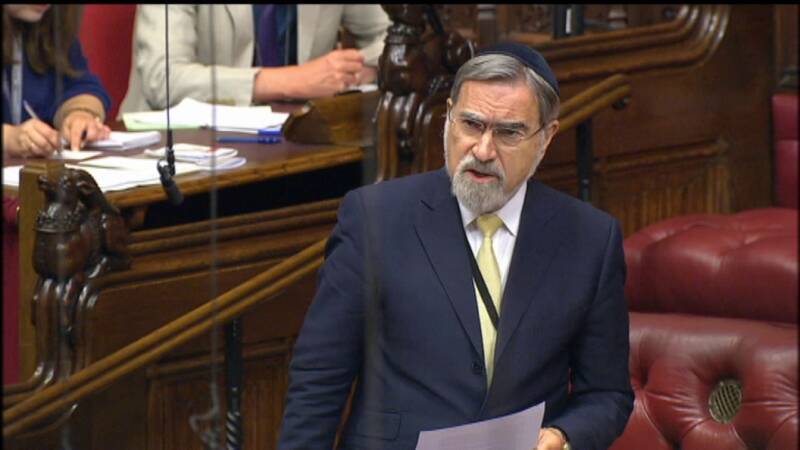 The persecution of Christians in the Middle East and sub-Saharan Africa is the “religious equivalent of ethnic cleansing”, former Chief Rabbi Lord Sacks has said.

He also warned that the use of religion as the “robe of sanctity” to legitimise the pursuit of power risked returning humanity to the Dark Ages.

Speaking in a debate on Article 18 of the Universal Declaration of Human Rights concerning freedom of belief, the cross-bench peer said a “tribalism” had emerged since the end of the Cold War instead of the hoped for spread of liberal democracy and its associated tolerance.

Today we know it didn’t happen that way. We have seen… the division and balkanisation of societies along religious lines and the return of the one thing that could take humanity back to the Dark Ages, namely the use of religion as the robe of sanctity to disguise and legitimate the naked pursuit of power.

The persecution of Christians throughout much of the Middle East, sub-Saharan Africa and Asia elsewhere is one of the crimes against humanity of our time and I am appalled at the lack of protest it has evoked.

What is happening to Christians in these places is the religious equivalent of ethnic cleansing.

But Lord Sacks, who served as Chief Rabbi of the United Hebrew Congregations of the Commonwealth for 22 years, also reminded peers not to forget that the vast majority of victims of Islamist violence and terror were Muslims.

“Our heart goes out to them too as they [our hearts] do to all other members of persecuted groups,” he said, before moving on to talk about rising antisemitism in parts of western Europe.

He told the House:

My Lords forgive me if I say that I did not expect 120 years after the Dreyfus case and 20 years after the Holocaust that the cry of ‘Death to the Jews’ would be heard again in the streets of France and Germany.

That people in the 21st century are being murdered, terrorised, victimised, intimidated and robbed of their liberties because of the way they worship God is a moral outrage, a political scandal and a desecration of faith itself.

I believe that God Himself weeps at the evils being committed in His name.

Let us urge as strongly as we can the worldwide implementation of Article 18 as one of the great challenges of our time so that we can all exercise our fundamental right to live our faith without fear.

Earlier in the debate, Lord Cormack said that Britain should lead a diplomatic war on extremism and stand opposed to repression of religious freedom everywhere.

He called for the Government to host a summit on the issue and said former foreign secretary William Hague should be appointed to travel the globe delivering the message that repression of religious freedom is not acceptable.

The Conservative peer went on:

I would like to see a unit in Number 10 devoted to religious freedom around the world.

Secondly, I would like to see a high level ambassador appointed to travel the world and to give this message.

Who better than William Hague who will have time on his hands next year?

We have got to address what has happened. We have got to declare, unequivocally, war on extremism wherever it is to be found, and by doing the sort of things I proposed, this Government could play a significant part in doing precisely that.