Rabbi Sacks’ Press Statement on being awarded the Templeton Prize 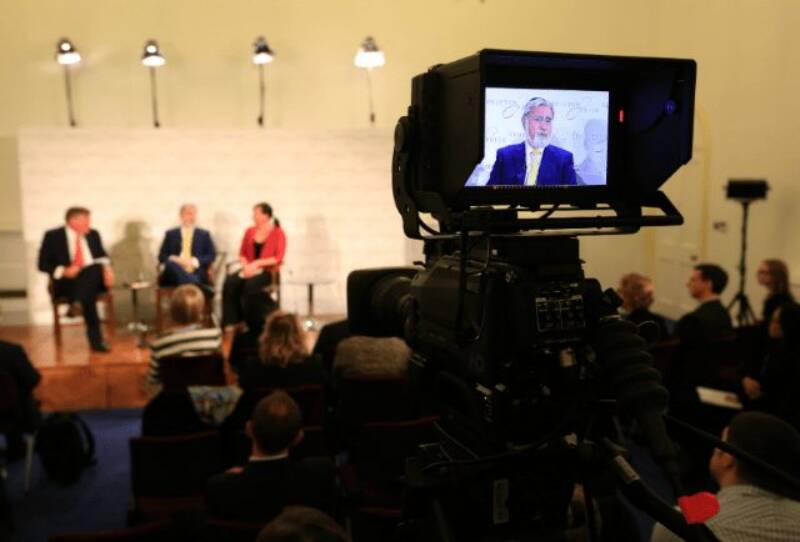 The receipt of this Prize is one of the great moments in my life, and I am surprised, grateful and humbled all at once. Not only because of what the Prize represents but also because of the man whose name it bears. Sir John Templeton was a remarkable human being who brought the same acumen that made him so successful an investor in financial capital to his philanthropic work that made him one of the world’s greatest investors in human and spiritual capital. That work has been faithfully continued by his family, and we think today in great sadness of Dr Jack Templeton, no longer with us, and wish his widow Pina long life. It continues today into the third generation and beyond, and by The John Templeton Foundation itself.

The work of the Foundation, not only in the Prize but equally in the research the foundation funds, has generated a real and perceptive climate change for the good in the academic world, in the relationship between science and the great questions of existence, the study of character and virtue, the interconnections between individual, economic and social freedom, the development of creativity, and the ethical implications of our developing understanding of genetics. Our world has been changed for the better by the Templeton family and The John Templeton Foundation, and I regard it as a great and humbling honour to count myself among the many charged with taking that work forward.

Sir John was fascinated among other things by the inter-relationship between religion and science, believing that the two would always prove to be compatible, since the God of revelation is also the God of creation. He was fascinated in both directions: by the religious implications of science, and the scientific implications of religion. How does our view of the cosmos help us better understand ourselves, and how does our understanding of ourselves affect our view of the cosmos.

We recently had a stunning example of this in the form of the detection of gravitational waves, finally confirming a prediction Einstein made a century ago. It would be something of an exaggeration to say that I understand the science involved. But the poetry is a thing of stark and stunning beauty. It took instruments of enormous sensitivity to detect a cosmic ripple of almost unimaginable smallness, yet which testifies to an enormous collision between two black holes that had been circling one another ever closer until they merged in an enormous event whose ripples can still be detected more than a billion years later. Einstein was right in his prediction of gravitational waves even if there were times later in his life when he doubted it and even sought to retract it. Gravity is not, as it were, a simple linear phenomenon, and its tremors, however slight, testify to vast explosive forces in the cosmos.

However, the linear theory of secularisation always was an over-simplification. First, it failed to take account of the persistence of faith. None of the four great institutions of the modern age – science, technology, the market economy or the liberal democratic state – offers a compelling answer to the three great questions every reflective human being will ask at some stage in life: Who am I? Why am I here? How then shall I live?

These belong to a different universe of discourse to that charted by science. As I put it in The Great Partnership: Science takes things apart to see how they work. Religion puts things together to see what they mean. We will always inhabit a world of the spirit that searches not just for explanation but also for meaning. Or as Einstein himself said: “To know an answer to the question, ‘what is the meaning of human life?’ means to be religious.”

No less significant, though, is that there always was a danger that extremism in one direction would generate a counter-extremism in the opposite direction. Like two black holes they might begin to circle one another, generating enormous turbulence. That, it seems to me, is the danger we face at present in many parts of the world: an extreme secularism facing extreme expressions of religion seeking to undo the work of four centuries of the West, threatening to take us back to the age of wars of religion. If these two powerful forces were to collide, the explosion would send ripples through the human universe for centuries to come.

This concern has driven much of my own work for the past quarter century, in three directions.

First I believe that religion, or more precisely, religions, should have a voice in the public conversation within the societies of the West, as to how to live, how to construct a social order, how to enhance human dignity, honour human life, and indeed protect life as a whole from environmental hazard. We are about to be challenged by huge questions. How shall we use the ever greater power of medical technology through active intervention in the human genome? How shall we structure a global economy without generating almost unbearable inequalities within and between nations? How shall we confront the challenge artificial intelligence will pose to traditional patterns of employment? And so on. Our powers are growing almost faster than we can understand, let alone control, and we need not just intelligence, artificial or otherwise, but also wisdom. If nothing else, the world’s great faiths are among our richest heritages of wisdom. Religion must have a voice in the public conversation, but it must be a reasoned and reasonable voice and one that makes space for other voices also.

Second, in a culture of global communication and interconnectedness, we need to work as hard as we can to enhance mutual respect and friendship between faiths. There is no one formula as to how to do this. I have argued, for example, that the message of monotheism is not, one God, one truth, one way, but rather the miracle that unity in heaven creates diversity on earth. I have argued that the book of Genesis, from which Judaism, Christianity and Islam all take inspiration, tells us that our shared humanity precedes and transcends our religious differences. More recently I have argued that we may have to reread the narratives of Genesis if we are to overcome the sibling rivalry that has all too often characterised the relationship between, and sometimes within, these three great faiths. Each religion, and each strand within each religion, will have to undertake this work, because if religion is not part of the solution it will assuredly be a large part of the problem as voices become ever more strident, and religious extremists ever more violent.

Third, I have tried within my own faith to do what I can to help turn religion outward. At times of great turbulence and change cultures become hedgehogs. They roll up and focus all their energies inward, presenting only sharp, prickly spines to the world outside. That is a symptom of fear – and faith should be the great antidote to fear. The imperative of the God of Abraham, as I understand it, is to be true to your faith while being a blessing to others regardless of their faith. The God of Abraham asks us to turn our face outward to the world, recognising His image even in the people who are not in our image, whose faith is not mine, whose colour and culture are not mine, yet whose humanity is as God-given and consecrated as mine.

These then have been the avenues I have sought to explore, and the Templeton Prize will both enable and encourage me to continue and intensify that work, seeking to find kindred spirits around the world, inspire young leaders to take the work forward into the future and doing all I can to honour the challenge of the prize itself, which is to make progress in religion, understanding that faith is a not-yet completed journey to a world awed by the cosmos as the work of God, and humbled in the face of our shared humanity as the image of God.