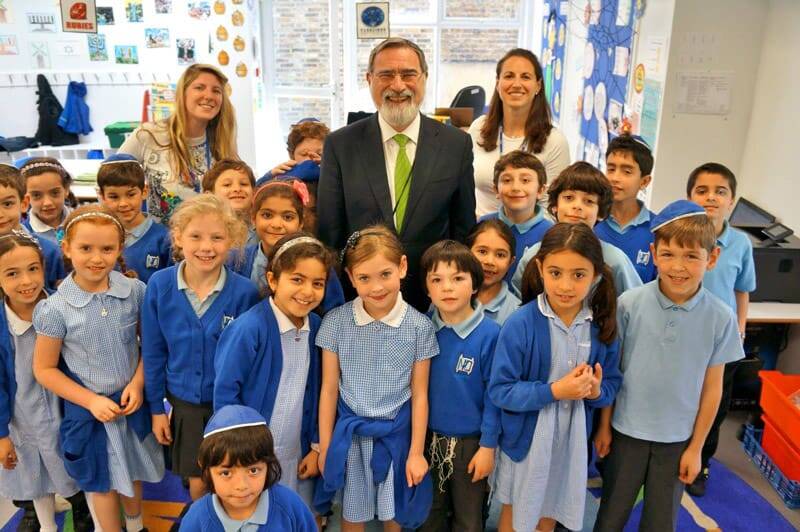 Though Rabbi Jonathan Sacks is widely acknowledged to be one of the greatest Jewish leaders of our time, not everyone is privileged to be exposed to his words in person. Last night, the attendees of the iJED Day School Conference had that once-in-a-lifetime opportunity.

The crowd of day school leaders and educators was spell-bound as Rabbi Sacks painted pictures – with almost equally vivid and engaging strokes – of exchanges between European leaders; words of Torah; and jokes about the Academy Awards and Jews and Chinese food. All of these components were masterfully woven together toward one central message: the vital importance of Jewish day schools, throughout Jewish history, today, and for our future.

Rabbi Sacks’ staunch support of day schools first stemmed from a broad survey of history. He listed names of famous empires which seemed impregnable in their day – all of which have ceased to exist, while our tiny people can “still stand and sing ‘Am Yisrael Chai’.” His analysis of the situation:

“To defend a country, you need an army. To defend civilisation, you need education.”

He pointed out that a focus on building schools has been there “in every syllable” of our history. While others built coliseums, we built schools.

Then, Rabbi Sacks began to speak not of education in the abstract, but specifically about Jewish day schools, and hard data of their impact in the present day. He discussed the American Jewish and British communities, where 30 years ago intermarriage rates were equally rising. Today, the younger generation of British Jewry is more religiously and Jewishly committed than their parents – while the recent Pew report indicates that the intermarriage rate amongst American Jewry is higher than ever before. Rabbi Sacks squarely attributes the state of his community to the fact that, in those 30 years, his community built more day schools. Whereas 10% of those 65 or older went to a Jewish day school, in 2013, 70% of Jewish children were attending.

“If you want to save the Jewish future, you have to build Jewish day schools – there is no other way,” said Rabbi Sacks.

How did Jewish attitudes toward day school change in the UK?

In part, Rabbi Sacks credited the schools themselves, for their great secular and Jewish results, emphasis on chessed, and active engagement in British society. In addition to that, he explained, British non-Jews love to admire Jewish day schools – and love to fund them too. Why? Because the Jews themselves take pride in them. Even while regaling us with stories of British and French leaders who were Jewish day school fans, the overall message was clear: We have to have pride in ourselves first for others to respect us as well.

In addition to speaking about the role of the day school institution, Rabbi Sacks also spoke about the vital role of teachers. He approached this topic through tales about Moses. He pointed out that we don’t refer to Moses as our “Liberator, Lawmaker, or Miracle-Worker.” Instead, he is “Rabbeinu” – our Teacher. Rabbi Sacks fully acknowledged that, when you are a teacher, there are times when you feel undervalued. In fact, he related how Moshe Rabbeinu himself had such feelings – until God permitted him to see the great influence he had had on the Council of Seventy Elders appointed to assist him in the governance of the people. After he was able to see that he had made a difference in their lives, he never suffered from depression again.

Even if, unlike Moses, we are not privy to understanding the full impact we have on others, Rabbi Sacks made an enormous claim: “The only thing that can be compared to God is the impact of teachers”! Even if we don’t hear it from our own people, he suggested, they will remember us, and they will walk a little taller because of what we do.

Rabbi Sacks urged the day-school field to own who we are and understand the importance of what we do. His words of encouragement could indeed provide powerful inspiration for other topics that have been discussed throughout the conference: how to tell your story to gain lay leaders, students, and philanthropic dollars; how to unleash creativity in our students; and how to boldly set out toward new territory in 21st century learning, new financial models, and online and blended learning. Let us hope that we are up to the challenge of answering his inspiring call to action – indeed, the future of the Jewish people depends on it.