The Rabbi Who Spoke to Rome 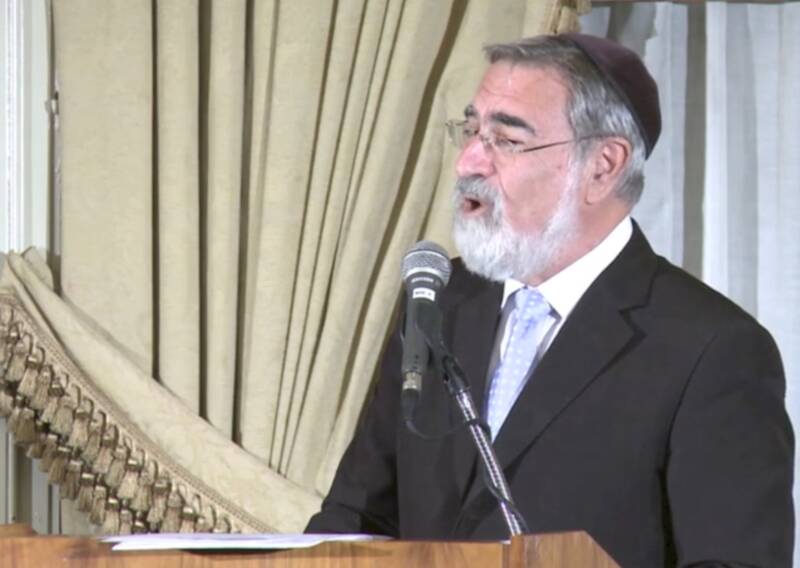 Did you hear the one about the Rabbi, the Pope and the humanist?

You did if you were at the Union League Club Monday evening. The Rabbi is Jonathan Sacks, the Pope is Francis and the humanist is Erasmus. These names mingled Monday night in an address aimed mainly at Western Christians who find themselves outcasts in a civilisation once dominated by Christian principles and Christian practices.

For these people, the first part of the Rabbi’s message is bleak: The battle for power is over, and you lost.

The second half is more arresting: Don’t worry about it.

Precisely by losing power, the Rabbi says, Christians might recover the prophetic voice our society desperately needs. By that he means a community of Christians who, by staying true to their faith without aiming to convert the larger society to their beliefs, become a leaven for society.

Oh, and one more thing: In this enterprise, Jews and Christians are allied as never before.

Until a few weeks ago, Rabbi Lord Jonathan Sacks was Chief Rabbi of the United Hebrew Congregations of the Commonwealth, i.e., nations that have had an historic link with Britain. As he looks out at the landscape of the 21st century, he sees two common threats to Jews and Christians.

One is from a militant Islam that has returned anti-Semitism to the continent of Europe in living memory of the Holocaust, while in the Middle East is engaged in what he calls “the religious equivalent of ethnic cleansing” of its ancient Christian populations. The other is from a secularising West.

His answer takes its cue from a 2004 lecture by Cardinal Joseph Ratzinger. In it, the man who’d later become Pope Benedict XVI likened Europe to the Roman Empire before its fall, and called on Christian believers to look upon themselves as a “creative minority” that can help their civilisation reclaim what’s best in its heritage.

In a followup e-mail, Rabbi Sacks makes the case this way:

“The task of a creative minority in the Judeo-Christian tradition,” he says, “is always to challenge the idols of the age, whatever the idols, whatever the age. The idols of our age are many — materialism, individualism, consumerism, relativism, a loss of the sense of the sanctity of marriage and the non-negotiable dignity of the human person. So being a minority does not mean that you believe that truth is relative. What it means is that every age has its idols and it needs prophetic voices to show the way to a deeper truth.”

Jews have an advantage here, if only because of centuries of experience in being a minority. The “creative” part Sacks attributes to the prophet Jeremiah, who told the Jews exiled to Babylon to settle down, have children and work for the peace and prosperity of their new city — because that would be the path to their own peace and prosperity.

That’s a harder message for Christianity, which in the West has grown used to having a place at the ruling table. Still, Sacks takes encouragement from the four most recent Popes and their outreach to Jews. In particular, he finds promise in Pope Francis’ emphasis on humility and the Gospel.

If the Rabbi is right, we are today living through one of those moments “when something new is taking shape but we don’t know what.” He’s hoping it will be an end to the long estrangement between Christians and Jews — and the start of a new collaboration on behalf of our society’s common good.

In this regard he cites the “courage” the post-Holocaust Catholic Church has shown in seeking a new way forward, recently underscored by Pope Francis when he declared that “God never abandoned his covenant with Israel.”

All in all, what the Rabbi has put on the table is an extraordinary proposition. And it’s notable that it comes via a small New York magazine — First Things — with large convictions. For the Rabbi’s talk this week is the 26th in a series of the magazine’s Erasmus Lectures; past speakers include then-Cardinal Ratzinger.

Though all but ignored by blogs and the press, the striking religious diversity of Monday’s audience is a news story itself. For it speaks to a new awakening based on a growing understanding among Jews and Christians that we’re all in this together.

So is the Rabbi optimistic? Wrong question, it turns out.

You might call it the real audacity of hope.