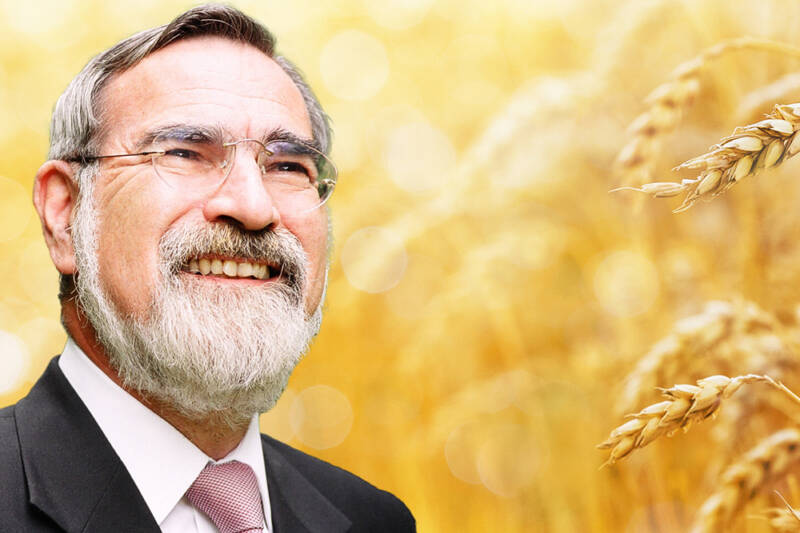 This Study Sheet contains biblical sources (mekorot), discussion questions, and ideas from Rabbi Sacks zt”l based on a shiur he gave in 2016 to introduce his Shavuot Machzor. The original shiur is available to view here. You can also download this Study Sheet in PDF.

First, let us examine the similarities between key elements of Megillat Rut and Sefer Bereishit…

The Torah, which is the law-book of Israel, should have begun with the verse, “This month shall be unto you the first of the months,” (Shemot 12:2) which is the first commandment given to Israel. What is the reason, then, that it begins with the account of the Creation? … In case the peoples of the world say to Israel, “You are robbers, because you took by force the lands of the seven nations of Canaan”, so that Israel may reply to them, “All the earth belongs to the Holy One, blessed be He; He created it and gave it to whom He pleased. When He willed He gave it to them, and when He willed He took it from them and gave it to us” (Yalkut Shimoni on Torah 187).

Rabbi Zeira says: “This book [of Rut] does not have anything in it concerned with impurity or purity nor what is forbidden and what is permitted. So why is it written? To teach us the greatness of the reward for acts of lovingkindness.”

Boaz said, “I have heard of all you have done for your mother-in-law ever since your husband died, of how you left your father, your mother, the land of your birth, and came to a people you knew not the day before.

The Lord said to Avram, “Go – from your land, your birthplace, and your father’s house – to the land that I will show you.

Even though the rest of the Five Books of Moses is about the people of Israel as a nation – a political body, and the books of Samuel and Kings are about Israel as a kingdom – another kind of political body, they both have a prelude about family. This is to tell us of the primacy of the personal over the political. They teach that politics alone cannot sustain a society if that society’s foundations are not built upon acts of kindness, generosity, and moral strength the likes of which are best exemplified in stories about the human family. Ultimately, there cannot be a larger society if the individuals do not matter, or are ignored.

Now we move to the crux of our discussion: A Tale of Two Women.

[The elders said to Boaz:] May your house be as the house of Peretz, whom Tamar bore to Yehuda, growing from the seed that the Lord will give you from this young woman.

Around that time, Yehuda left his brothers and camped near an Adulamite named Chira.

Once, in the days when the judges ruled, there was a famine in the land. One man set out from Beit Lechem of Yehuda and journeyed to live for a while in the land of Moav, and his wife and two sons came with him. This man’s name was Elimelech, his wife’s was Naomi, and his two sons’ names were Machlon and Chilyon, all Efratites from Beit Lechem of Yehuda. They duly arrived in the fields of Moav, and there they stayed.

But Er, Yehuda’s firstborn, was wicked in the Lord’s sight, and the Lord took his life. Yehuda then said to Onan, “Go in to your brother’s wife and fulfill your duty as her brother-in-law. Provide children for your brother.” But Onan knew that the children would not be considered his. Whenever he came to his brother’s wife, he let his seed go to waste on the ground so as not to have children in his brother’s name. What he did was wicked in the Lord’s sight, and so He took his life also.

After that, the two of them – Machlon and Chilyon – died as well, and the woman was left bereaved of both her children and her husband.

Then Yehuda said to his daughter-in-law Tamar, “Live as a widow in your father’s house until my son Shela grows up” – for he thought he [Shela] too might die like his brothers. So Tamar went to live in her father’s house.

Said Naomi, “Turn back, daughters; why would you come with me? Have I still sons in my womb who could be husbands to you? Turn back, my daughters – go; I am too old to be with a man. Even were I to say, ‘There is hope for me still,’ were I even this night to be married, even if I could bear sons again, are you to wait for them as they grow? Would you be chained to them, never to be with another man? No, daughters, for your presence is most bitter to me now, for the hand of the Lord has beaten me.”

Yehuda recognised them and said, “She is more righteous than I. It was because I did not give her to Shela my son.” He did not know her intimately again.

“On the day you buy that field from Naomi,” said Boaz, “and from Rut the Moabite, you will have bought the wife of a dead man with it, to restore the dead man’s name on his estate.”

And she took off her widow’s clothes and covered herself with a veil. Disguised, she sat at the entrance to Einayim on the road to Timna, for she had seen that Shela was now grown up and yet she had not been given to him as a wife.

At midnight the man started and turned over – there was a woman lying at his feet! “Who are you?” he said, and she answered, “I am your maidservant Rut – spread your mantle over your maidservant, for you are a redeemer.”

What similarities can you find between Rut and Tamar?

There are an overwhelming abundance of similarities between Tamar, and Rut. Let’s examine a few:

• Both stories begin with the senior males (Judah and Elimelech) moving away from their larger family and into a moral or physical decline.

• In both stories, the movers and shakers are the women – Tamar and Rut.

• Both stories involve the death of two sons.

• In both cases, the woman is left as a childless widow, with no possibility of yibum, or Levirate marriage.

• In both stories, the women are determined to make sure that the name of their dead husband is perpetuated by having a child that will carry his lineage forward. The women, and not the two men who were obligated, were mindful of the

moral duty to perpetuate the names.

• In both stories, the women are required to act daringly in order to achieve their goals.

Ultimately, the most important similarities have to do with the women themselves. Our heroes, the ones whose acts are essential for the perpetuation of the Jewish people are the most marginalised of characters: Childless widowed women, women from foreign and adversarial nations, to whom people denied help. And yet, these two women, at the very margins of society, emerge as heroines and they allow the Jewish story to continue.

Finally, how do we define ‘The Jewish Hero’?

The Lord said to Shmuel… I am sending you to Yishai, the Bethlehemite, for I have seen a king for Me among his sons.”… When they arrived, he saw Eliav and thought, “Surely the Lord’s anointed is before Him.” But the Lord said to Shmuel, “Do not look upon his appearance or his tall bearing, for I have rejected him, not seeing as man does; for man sees what the eyes see, but the Lord sees into the heart.” Then Yishai called to Avinadav and passed him before Shmuel, who said, “The Lord has not chosen this one either.” And when Yishai had Shama pass, he said, “The Lord has not chosen this one either.” Yishai had his seven sons pass before Shmuel, but Shmuel said to Yishai, “The Lord has not chosen any of these.” Then Shmuel asked Yishai, “Are there no other boys?” “There is still the youngest,” he said. “Right now, he is shepherding the flock.” “Send out to fetch him,” Shmuel said to Yishai, “for we will not move on until he comes here.” He sent out and brought him; he was ruddy, with beautiful eyes, and handsome. And the Lord said, “Arise, anoint him – for he is the one.”

In The Myth of the Birth of the Hero, the Freudian theory of the origin of the hero is spelled out: A child is about to be born to a royal couple but the king sees the child as a threat. To protect himself from the child, the king arranges for the child to be killed. As it happens, the child isn’t killed, but is found and adopted by ordinary, simple people. Eventually, everything that is foretold actually happens. The child grows up, defeats the king, and is subsequently discovered to have royal blood.

In the story of King David, we have two stories about his origin and the key figures are Tamar and Rut. As opposed to coming from royal blood, King David is descended from two marginalised women and he becomes Israel’s greatest king.

The Torah is teaching that your dignity, your strength, and your character don’t depend on who you are born to. Every child is special. This is the opposite of the classical origin story of a hero. In this tradition it is not David’s birth order that makes him stand out, but instead, what God sees inside of him. David inherits the legacy of loyalty and kindness, courage and vulnerability from his ancestors Tamar and Rut, and that is why God sees him as fit to rule Israel.

The story of the Book of Rut is thus ultimately an important lesson, crucial to our survival: never write an individual off before you truly see their character.