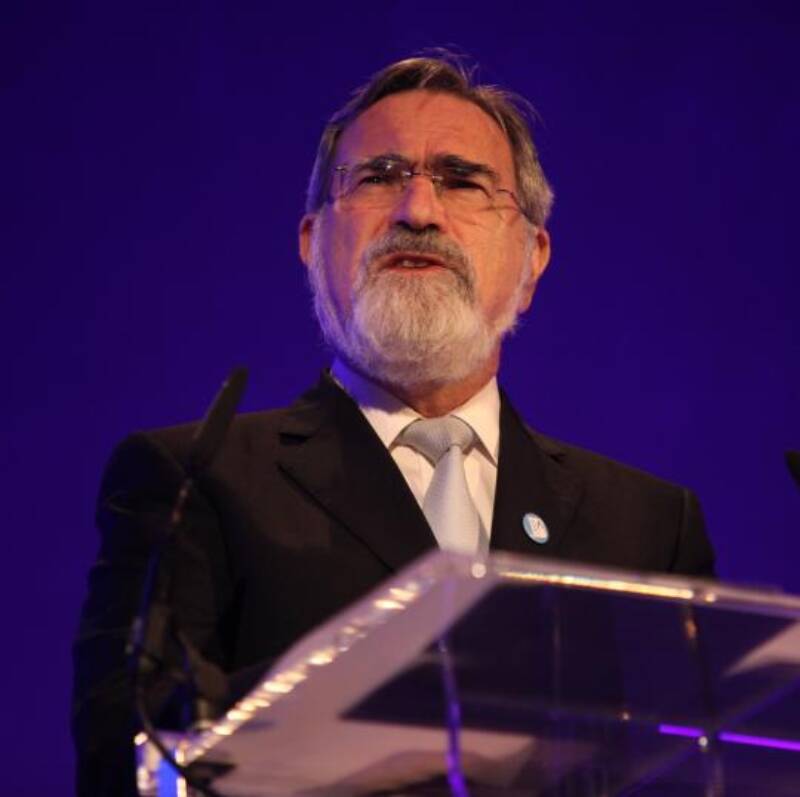 In January 2013 Rabbi Sacks delivered an address at the national Holocaust Memorial Day Trust’s commemorative event for the final time as Chief Rabbi. He used the moment to speak about the impact the Holocaust survivors had made, on him and on society at large. As he noted in his remarks: “We cannot change the past, but the survivors have shown us that out of the wreckage of destruction something can be redeemed from the past, if we fight hate with love, brutality with compassion, and death with an unconquerable dedication to life.

Today is a time of remembrance for all the victims: the Roma, the Sinti, the gays, the mentally and physically disabled, and all the others, as well as the victims of those other evils on an epic scale. Bosnia, Cambodia, Darfur, and of course Rwanda. Eight-hundred thousand people massacred in a hundred days.

And we remember the Jews – more than one in two of every Jew in Europe: young and old, rich and poor, pious and assimilated, and a million and a half children. A whole murdered generation. ‘For these I weep’ says the Book of Lamentations. ‘My eyes, my eyes run with tears and there is no one to comfort me, no one to restore my spirit.’ We remember the victims.

But because today is the last time I will address this gathering as Chief Rabbi, I want to pay a personal tribute to the survivors. To every one of them, from whom I have learnt more than any other group I have met, and who I admire above all. How they survived knowing what they had seen and lived through I will never know.

The Bible uses words about Noah that it uses about no one else. He was righteous, perfect in his generations, he walked with God, and yet, Noah after the flood could hardly live. We see him drunk and dishevelled, a sad shadow of what he once was. Even Noah, the righteous man could not bear the pain of seeing his world destroyed.

And yet, the survivors I knew and know somehow found a greater strength than that, partly because they gave one another strength having many of them lost all their families – they became one another’s family and lifted one another. Partly because with an absolutely iron will, they looked towards the future, perhaps knowing that if they once looked back they would be turned like Lot’s wife into a pillar of salt. And partly in this, I find most moving of all, because of their indomitable faith in life itself they married many of them, had children, grandchildren, and refused to let evil have the final word or the final victory.

And so, the survivors became my heroes. And then when they built a life for themselves and often after only fifty years they did look back and they told their stories – taught them to all our children and bore witness so that the world would know these things happened not just through films or books, but through the words of those who were there.

And then I think of some of their stories. I think of Victor Frankel, the late Victor Frankel, who survived Auschwitz spending all his free time there giving people the will to live and after the war creating an entire new school of psychotherapy built on man’s will to meaning. I think of the Rabbi of Klausenburg, the late Rabbi Yekutiel Halberstam, who survived Auschwitz and Dachau, but lost his wife and all eleven of his children, and during the war he vowed that, if he survived then he would dedicate his life to saving life. He built the Laniado hospital in Israel dedicated to healing Jews, Muslims and Christians a like to dealing with their spirits, as well as their bodies in absolute dignity.

I think of so many others whose whole lives after the Holocaust were a way of thanking God for life by enhancing the lives of others. We cannot change the past, but the survivors have shown us that out of the wreckage of destruction something can be redeemed from the past if we fight hate with love, brutality with compassion, and death with an unconquerable dedication to life.

May God bless the survivors, all survivors, and may their courage inspire us and our children never to hate and never to be afraid.