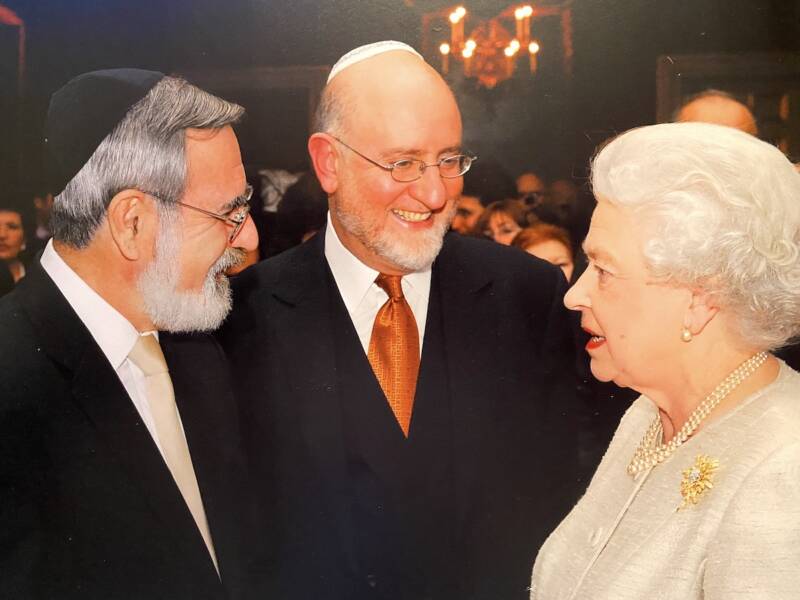 Broadcast on BBC Radio 4’s Thought for the Day, 1st June 2012, in honour of the Queen’s Diamond Jubilee

Among my first memories, I was four at the time, was of Her Majesty becoming the Queen. My father went out to buy a television – a huge piece of furniture with a tiny screen – so that we could watch the coronation. In my first days at school we were taught the national anthem and I can remember thinking that the words “long to reign over us” were about the weather, which was why England was so wet. She reigned, I thought, exceptionally well, and so she has in the true sense for sixty years.

Jews are intensely loyal to the Queen. Every week in synagogue we say a prayer for her and her family. Each time we see her in person we say a special blessing, and tomorrow we’ll be saying a special prayer for the diamond jubilee. Two thousand years ago the Rabbis said, pray for the welfare of the monarch for were it not for respect for him or her, people would eat one another alive.

Strong words; but ones Jews and others feel in their very bones. My late father came here from Poland. My mother’s family came from Lithuania. Had Britain not let them in they would have died in the Holocaust, and I would never have been born. For us Britain’s tolerance and traditions of fairness aren’t something we take for granted. They are the very things that allow us to live without fear. And they are embodied, personified in her Majesty the Queen.

For most of us she’s the human face of national identity, the unifying presence at the heart of British life, to whom we feel loyalty whichever way we vote, and regardless of class, colour, culture or creed. It was intensely moving on Tuesday of this week in the House of Lords to hear Jewish, Christian, Muslim, Hindu, Sikh and Zoroastrian peers speak of how much she means to each of our communities, and we need that unifying presence all the more, the more diverse we become.

For sixty years the Queen has spoken gently to the better angels of our nature. Hers has been the quiet heroism of service, the dignity of dedication to the common good, the good that’s so much bigger and nobler than self interest. She makes us a little better than we might otherwise have been. A third century Rabbi used to say: where you find greatness there you find humility, and that has been her Majesty’s greatness. May God bless her, for she has truly blessed us.