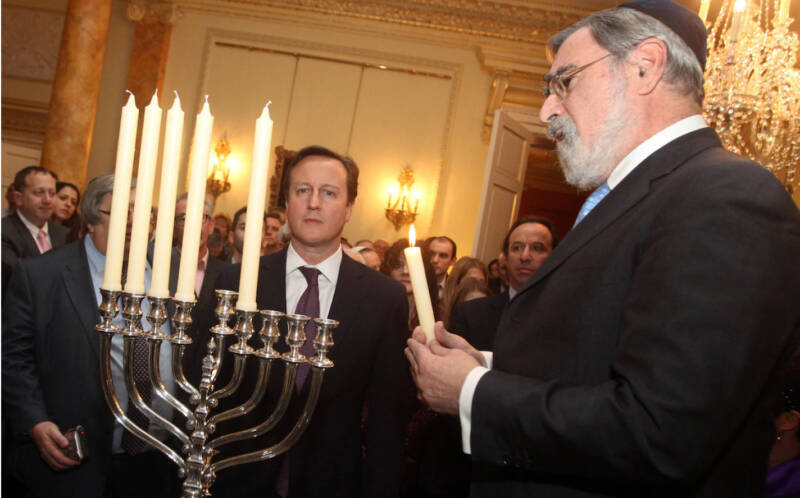 A Chanukah Message for the First Night

INSPIRED BY FAITH, WE CAN CHANGE THE WORLD

Twenty-two centuries ago, when Israel was under the rule of the empire of Alexander the Great, one particular leader, Antiochus IV, decided to force the pace of Hellenisation. He forbade Jews from practising their religion and even set up a statue of Zeus Olympus in the Beit HaMikdash in Jerusalem.

This was too much to bear, and a group of Jews, the Maccabees, fought for their religious freedom, winning a stunning victory against the most powerful army of the ancient world. After three years of conflict, they reconquered Jerusalem, rededicated the Beit Hamikdash and relit the Menorah with the one cruse of undefiled oil they found among the wreckage.

It was one of the most spectacular military achievements of the ancient world. It was, as we say in our prayers, a victory of the few over the many, the weak over the strong. It is summed up in wonderful line from the Prophet Zechariah: “Not by might nor by strength but by my spirit says the Lord.” (Zechariah, 4:6)

The Maccabees had neither might nor strength, neither weapons nor numbers. But they had a double portion of the Jewish spirit that longs for freedom and is prepared to fight for it. Never believe that a handful of dedicated people can’t change the world. Inspired by faith, they can. The Maccabees did then. So can we today.

Why did God choose this tiny people for so great a task, to be His witnesses in the world, the people who fought against the idols of the age in every age, the carriers of His message to humanity? Why are we so few?… Where did Jewish strength lie if not in numbers?

The Torah gives an answer of surpassing beauty. God tells Moshe: Do not count Jews. Ask them to give, and then count the contributions.

In terms of numbers we are small. But in terms of our contributions, we are vast. In almost every age, Jews have given something special to the world…

When it comes to making a contribution, numbers do not count. What matters is commitment, passion, dedication to a cause. Precisely because we are so small as a people, every one of us counts. We each make a difference to the fate of Judaism and the Jewish people.

The Chanukah story as told in the Al HaNissim prayer in the siddur:

“In the days of Mattityahu, son of Yochanan, the High Priest, the Hasmonean, and his sons, the wicked Greek kingdom rose up against Your people Israel to make them forget Your Torah and to force them to transgress the laws of Your will. It was then that You in Your great compassion stood by them in the time of their distress. You championed their cause, judged their claim, and avenged their wrong. You delivered the strong into the hands of the weak, the many into the hands of the few, the impure into the hands of the pure, the wicked into the hands of the righteous, and the arrogant into the hands of those who were engaged in the study of Your Torah. You made for Yourself a great and holy reputation in Your world, and for Your people Israel You performed a great salvation and redemption as of this very day. Your children then entered the holiest part of Your House, cleansed Your Temple, purified Your Sanctuary, kindled lights in Your holy courts, and designated these eight days of Chanukah for giving thanks and praise to Your great name.”

The Chanukah story continued, as told in the Talmud (Shabbat 21b):

“When the Greeks entered the Sanctuary they ruined all the cruses of oil that were in the Sanctuary by touching them, which made them unfit. When the Hasmoneans overcame them and emerged victorious over them, they searched everywhere for oil to relight the Menorah in the Temple, but could only find one cruse of oil that had the seal of the High Priest unbroken, untouched by the Greeks.

This cruse of oil was only enough to light the Menorah for one day. A miracle occurred and the Menorah was lit by this oil for eight days. The next year the Sages instituted a festival to remember and celebrate those days, by singing Hallel and saying special prayers of thanksgiving.”

Which do you think is more impressive, the military victory or the miracle of the oil?

Rearrange the letters used in each anagram to find the 8 Chanukah-related words.

In Judaism, the number 8 represents miracles. Why? Because it is beyond 7, which represents nature – the 7 days of creation.

INSPIRED BY FAITH, WE CAN CHANGE THE WORLD

God can perform miracles through supernatural means, and through nature. The military victory represents a natural miracle, as the Maccabees fought hard, but they achieved an unlikely triumph that must have benefitted from God’s help. This is no less impressive than the supernatural miracle of the oil that burned for eight days, when it should only have burned for one day.

Tonight’s book is The Politics of Hope, a brilliant analysis of the rise in the ‘politics of anger’ in the West today and how it might be possible to instead create a different kind of politics: the ‘politics of hope’.