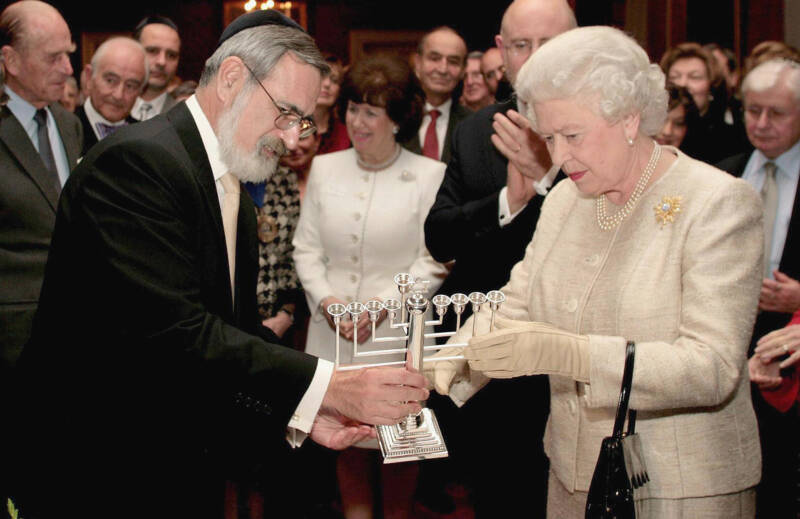 A Chanukah Message for the Third Night

THERE IS more than one command in Judaism to light lights. There are three. There are the Shabbat candles. There is the havdallah candle. And there are the Chanukah candles.

The difference between them is that Shabbat candles represent shalom bayit, peace in the home. They are lit indoors. They are, if you like, Judaism’s inner light, the light of the sanctity of marriage and the holiness of home.

The Chanukah candles used to be lit outside — outside the front door. It was only fear of persecution that took the Chanukah candles back inside, and in recent times the Lubavitcher Rebbe introduced the custom of lighting giant chanukiyot in public places to bring back the original spirit of the day.

Chanukah candles are the light Judaism brings to the world when we are unafraid to announce our identity in public, live by our principles, and fight, if necessary, for our freedom.

As for the havdallah candle, which is always made up of several wicks woven together, it represents the fusion of the two, the inner light of Shabbat, joined to the outer light we make during the six days of the week when we go out into the world and live our faith in public.

There always were two ways to live in a world that is often dark and full of tears. We can curse the darkness or we can light a light, and as the Chassidim say, a little light drives out much darkness. May we all help light up the world.

FAMILY… is the best means we have yet discovered for nurturing future generations and enabling children to grow in a I ADMIRE other civilisations and traditions, and believe each has brought something special into the world, “aval zeh shelanu”, “but this is ours”. This is my people, my heritage, my faith. In our uniqueness lies our universality. Through being what we alone are, we give to humanity what only we can give. This, then, is our story, our gift to the next generation. I received it from my parents, and they from theirs, across great expanses of space and time. There is nothing quite like it. It changed, and still challenges, the moral imagination of humankind.

IT WAS a frigid Saturday night during Chanukah of 1974 when Rabbi Abraham Shemtov had the unusual idea of lighting a big chanukiah right in front of Independence Hall in Philadelphia, which houses the Liberty Bell, the icon of American freedom.

The chanukiah was crude and made of wood; he had fashioned it with the help of some visiting yeshivah students. Almost no one was on Independence Mall in Philadelphia that night to witness the actual lighting, but that simple four-foot chanukiah was the seed from which thousands of public chanukiyot have sprouted up in public and private places throughout the United States and around the world.

Over the next few years, chanukiyot began springing up in cities and towns all across America. The next major development was in 1979, when Shemtov collaborated with Stuart Eizenstat – President Jimmy Carter’s chief domestic-policy adviser and executive director of the White House domestic-policy staff – to arrange for a chanukiah to be placed on the White House Lawn. Despite the fact that Carter was awash in the opening weeks of the Iranian hostage crisis, he pointedly walked from the White House to the chanukiah, where he lit the shamash – the helper candle from which the others are kindled – and shared greetings with the assembled crowd.

Throughout the following decades, the number of chanukiyot and scope of their reach has continued to blossom. It is estimated that as many as 15,000 Chabad-Lubavitch chanukiyot are publicly lit worldwide.

One of the largest lightings is the one near the Eiffel Tower in central Paris, which has attracted as many as 20,000 French Jews. And in 1991, in the presence of approximately 6,000 Jewish people, longtime Chabad underground activist Avraham Genin kindled a giant chanukiah inside the Kremlin Palace of Congresses.

In 2013 the tallest chanukiah in Europe (more than 30 feet tall!) was constructed and lit on the first night of Chanukah at the Brandenburg Gate in Berlin, Germany, once a symbol of Nazi Party racism and hatred. Thousands of people attended the public ceremony, including local dignitaries. “Bringing light to places of darkness is the message of Chanukah,” said Chabad-Lubavitch of Berlin’s director, Rabbi Yehuda Teichtal. “There is no greater contrast than lighting a menorah here – in the place that was once the epitome of darkness – and now flooding it with the essence of light.”

Does the lighting of giant chanukiyot throughout the world make you uncomfortable or proud?

How many can you find?

Every year the US President and first lady host an annual Chanukah party for hundreds of American Jewish politicians and leaders of the Jewish community, but this wasn’t always the case. Chanukah was first celebrated at the White House after Prime Minister of Israel David Ben- Gurion gave Harry Truman a chanukiah as a gift in 1951. George H.W. Bush attended a Chanukah party for staff in the Executive Office Building in 1991 and two years later, Bill Clinton hosted a candle-lighting ceremony in the White House for the first time with his staff. The first official White House Chanukah party was held on 10th December 2001. President George W. Bush borrowed a 100-year-old chanukiah from the Jewish Museum in New York for the event.

They both demonstrated courage and self-sacrifice for their people. They put themselves in harm’s way in Rabbi Sacks often said that non-Jews respect Jews who respect their Judaism, and non-Jews are embarrassed by Jews who are embarrassed by their Judaism. Chanukah is a time when we are proud to take our Judaism into the public sphere. We are not trying to impose our ideas on the non-Jewish world. Rather, we only hope to expose the world to the beauty of Judaism, so that everyone can benefit from its light.

Tonight’s book is Radical Then, Radical Now (published as A Letter in the Scroll in the North America), an inspiring gaze at our Jewish roots, and a challenge to each one of us to carry our legacy forward and help to build a better world.