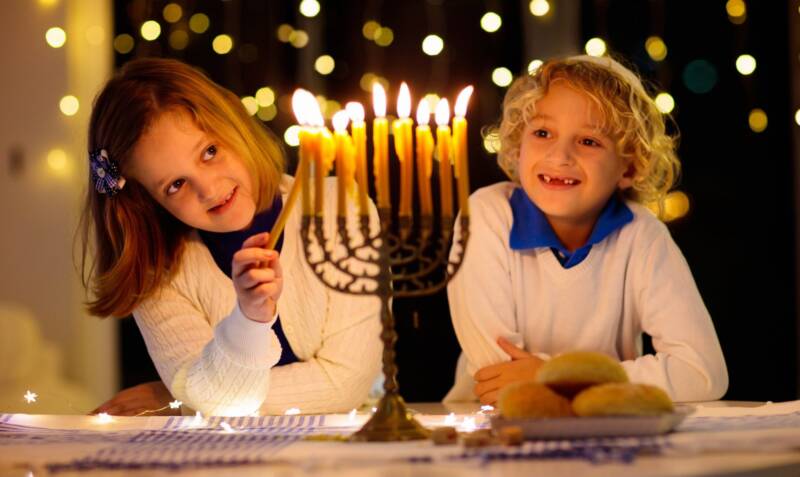 A Chanukah Message for the Fourth Night

THE FIRST CLASH OF CIVILISATIONS

One of the key phrases of our time is “the clash of civilisations”. And Chanukah is about one of the first great clashes of civilisation, between the Greeks and Jews of antiquity, Athens and Jerusalem.

The ancient Greeks produced one of the most remarkable civilisations of all time: philosophers like Plato and Aristotle, historians like Herodotus and Thucydides, dramatists like Sophocles and Aeschylus. They produced art and architecture of a beauty that has never been surpassed. Yet in the 2nd century B.C.E they were defeated by the group of Jewish fighters known as the Maccabees, and from then on Greece as a world power went into rapid decline, while the tiny Jewish people survived every exile and persecution and are still alive and well today.

What was the key difference between the two groups? The Greeks, who did not believe in a single, loving God, gave the world the concept of tragedy: We strive, we struggle, at times we achieve greatness, but life has no ultimate purpose. The universe neither knows nor cares that we are here.

In stark contrast, Ancient Israel gave the world the idea of hope. We are here because God created us in love, and through love we discover the meaning and purpose of life.

Tragic cultures eventually disintegrate and die. Lacking any sense of ultimate meaning, they lose the moral beliefs and habits on which continuity depends. They sacrifice happiness for pleasure. They sell the future for the present. They lose the passion and energy that brought them greatness in the first place. That’s what happened to Ancient Greece.

Judaism and its culture of hope survived, and the Chanukah lights are the ultimate symbol of that survival, of Judaism’s refusal to abandon its values for the glamour and prestige of a secular culture, then or now.

A candle of hope may seem a small thing, but on it the very survival of a civilisation may depend.

The military victory [of Chanukah] was short-lived. Within a century Israel was again under foreign rule, this time by the Romans. It was the spiritual victory that survived. Realising that the real battle was not against an empire but a culture, Jews set about constructing the world’s first system of universal education. The effect was astonishing. Although they were later to suffer devastating defeats at the hands of the Romans, they had created an identity so strong that it was able to survive 2,000 years of exile and dispersion.

What history taught them was that to defend a country you need an army, but to defend a civilisation you need schools. In the short run battles are won by weapons, but in the long run they are won by ideas and the way they are handed on from generation to generation. Oddly but appropriately, Chanukah comes from the same Hebrew root as the word “chinuch”, meaning “education”.

WHEN RAV KOOK was a young man he studied in yeshiva in a small town called Lutzen. At the end of the year he returned home with a present for his parents – a bundle of poems. But this did not please his father, who was concerned his son was being influenced by the secular world of the haskalah. The following year Rav Kook instead brought home a notebook full of original insights into complex halachic topics. But the urge to read and write poetry was still strong in his heart. Later in his life, Rav Kook found a way to bring these two passions together, by writing a long poem that incorporated all the laws of Chanukah, utilising his mastery of the Hebrew language and halachah, while also fulfilling his desire to express himself poetically.

Why was Rav Kook’s father concerned about secular culture? How did Rav Kook respond to this?

Many have the custom to give ‘Chanukah gelt’ (Yiddish for ‘Chanukah money’) to children on Chanukah. It is believed that the custom began in Poland in the 17th century, initially so that the children could then give coins to their teachers as a gift of gratitude for the festival, but later on, money was also given to the children to keep (and this may also be where the custom to give children Chanukah gifts came from). Chanukah gelt is connected to the festival of Chanukah, as the Hasmoneans minted national coins to celebrate the victory of the Maccabees over the Ancient Greeks. In the 20th century, chocolate Chanukah gelt coins became a popular gift on Chanukah, which were especially good for playing dreidel with.

THE FIRST CLASH OF CIVILISATIONS

Tonight’s book is The Great Partnership: Science, Religion, and the Search for Meaning, a compelling investigation into the predominance of science-oriented thinking which is embedded deeply even in our religious understanding. In a fast-moving world of new discoveries, Rabbi Sacks calls on us to recognise the centrality of science’s relationship to true religion, and the essentiality of this relationship.