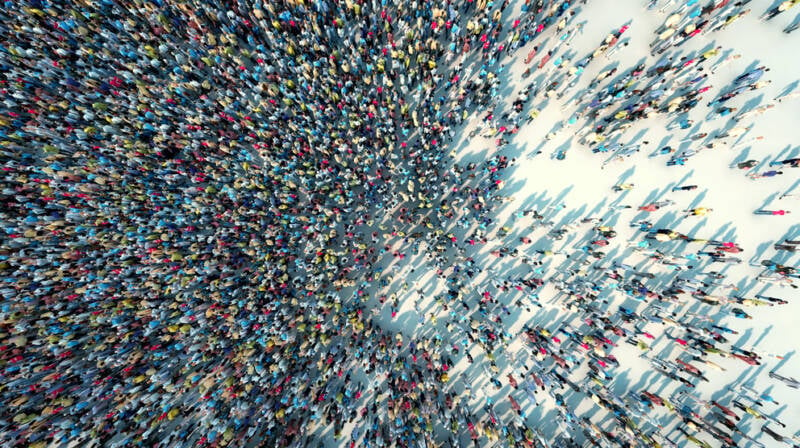 The central theme of the book of Numbers is the second stage of the Israelites’ journey. Not only are they on a physical journey from Egypt to the Promised Land, but they must also adjust their mentality from slavery to freedom. This is their journey through Bamidbar.

This parsha is about the preparations for that journey, the first step being to take a census. To inherit the land, the Israelites will have to fight. Hence the census, specifically of men between the ages of twenty and sixty (those eligible to serve in battles). The Levites were counted separately because it was their role to minister in the Sanctuary.

Instructions were given as to the layout of the camp, which was to be a square with the Sanctuary in the middle. Three tribes were to set up their tents and banners on each side, while the Levites formed an inner square. The order in which they encamped was also the order in which they journeyed. The duties of the family of Kehat – which also included Moses, Aaron, and Miriam, who had other roles – were spelled out. It was their task to carefully carry the most sacred objects, the Ark, Table, Menorah, Altars, curtains, and holy vessels used in the sacrificial service, when the Israelites journeyed.

Bamidbar begins with a census (a counting) of the Israelites. That is why this book is known in English as ‘Numbers’. Our question is, since this is the Jewish People’s third census within the space of a single year, why was it important to do this again? Is this census special?

The answer lies in the phrase the Torah uses to describe the act of counting: se’u et rosh, literally, to “lift the head.” This is a strange, indirect expression. Biblical Hebrew contains many verbs meaning “to count”: limnot, lifkod, lispor, lachshov. Why does the Torah not use one of these words, choosing instead the roundabout expression, “lift the heads” of the people?

In any census, head-count or roll-call there is a tendency to focus on the total: the crowd, the multitude, the mass. The larger the total, the stronger the army, the greater the fan-base, and the more successful the company.

Counting a group devalues the individual, and tends to make him or her replaceable. If one soldier dies in battle, another will take his place. If one person leaves the organisation, someone else can be hired to do his or her job.

There is therefore a danger, when counting a nation, that each individual will feel insignificant. “What am I? What difference can I make? I am only one of millions, a mere wave in the ocean, a grain of sand on the sea-shore, dust on the surface of infinity.” So God tells Moses to “lift people’s heads” and to show them that they each count; they all matter as individuals. To lift someone’s head means to show them favour, to recognise them. If a census is taken in this way, it is a gesture of love. This census, and the language used to describe it, sends the clear message that in Judaism we believe that each individual matters.

1. We often count people (for example a national census, a crowd at an event, or even the size of our families). Why do you think this is?

2. How might counting people devalue individuals in a group? Can you think of when this is done on purpose?

3. What is the message of the language “se’u et rosh” used in this census ?

Every year at Israel’s official state Independence Day celebrations on Mount Herzl, 12 individuals are granted the honour of lighting a torch, one for each of the 12 tribes of the Jewish people. During the celebrations for Israel’s 71st birthday, a very special woman was honoured. Here is her story:

Marie Nahmias, affectionately called Mamo (“mother” in Tunisian-accented French) by all who know her, spent her youth hiding from Nazis during the German occupation of Tunisia. She was then forced to flee from Arab pogroms against the Jews of Tunisia, and so she arrived in Israel as a young woman with no money or prospects. She lived a life of poverty in those early years, forced to reside in ma’abarot (tented camps), as the government desperately tried to develop enough housing to meet the needs of the hundreds of thousands of Jewish refugees who were arriving. She settled in the northern town of Afula, married and raised eight children there, and struggled to make ends meet.

Then tragedy struck and her son Shaul was badly wounded whilst serving in the Yom Kippur War in 1973. As he lay in hospital for the weeks and months that followed the war, she vowed that if God healed her son, she would be willing to do any mitzvah or mission given to her. God heard her prayer and her son recovered.

Shaul became a social worker for the municipality, and one day he called her and said he had a little disabled girl who needed a home. She didn’t hesitate, and this young girl became the first of 52 foster children that were raised in her house. The children she cared for often had special difficulties, illnesses, and physical limitations. At first they came from the Afula social services department. Some were Jewish, some were Arab. Soon, news of her kindness and love spread, and children began arriving at her doorstep from around the country, and sometimes even from beyond Israel’s borders. As her fame grew, it became known everywhere that she was willing to take in and raise any child, because she believed in her heart that every person was made in the image of God, no matter where they came from or what difficulties they had in life.

As the dignified 93-year-old lit the torch that chilly May evening in front of the eyes of the nation, the host of the ceremony broke with protocol and asked Mamo to bless the nation. Again she did not hesitate: “May Israel be blessed, from all my heart, God will hear me, Israel will rise ever upward, that we grow, that our soldiers don’t fall anymore — that the Jews and the Arabs and the Christians and the Druze, will all become one single hand. We are all created by God, may He give us peace.” Before she had even finished saying these words, the crowd, led by the Prime Minister and his wife, rose to their feet in a standing ovation, cheering her words and her message.

1. How does the life of Mamo embody the value of the message of this week’s Covenant & Conversation?

2. Do you think the struggles Mamo faced in her life were more or less likely to encourage her to live the life she did?

Crowds tend to have the effect of making the individual lose his or her independent judgment and instead simply follow what others are doing. We call this “herd behaviour,” and it sometimes leads to collective madness. Gustav Le Bon’s The Crowd: A Study of the Popular Mind (1895) showed how crowds exercise a “magnetic influence” that transmutes the behaviour of individuals into a collective “group mind.” As he put it, “An individual in a crowd is a grain of sand amid other grains of sand, which the wind stirs up at will.” People in a crowd become anonymous. Their conscience is silenced. They also lose a sense of personal responsibility. Large gathered groups are peculiarly prone to regressive behaviour, primitive reactions and instinctual actions. Crowds are easily led by exploiters and manipulators, who may play on people’s fears and sense of victimhood, and incite them to hate and attack other groups.

Judaism never allows us to lose our individuality in the mass. We believe that every human being is in the image and likeness of God. The Sages taught us that every life is like an entire universe. Rambam says that each of us should see ourselves as if our next act could change the fate of the world. Every dissenting view is carefully recorded in the Mishnah, even if the law is otherwise. Every verse of the Torah is capable, said the Sages, of seventy interpretations. No voice, no view, is silenced.

There is a wonderful blessing mentioned in the Talmud to be said on seeing 600,000 Israelites together in one place. It is: “Blessed are You, Lord … who discerns secrets.” The Talmud explains that every person is different. We each have different attributes. We all think our own thoughts. Only God can enter the minds of each of us and know what we are thinking, and this is what the blessing refers to. In other words, even in a massive crowd where, to human eyes, faces blur into a mass, God still relates to us as individuals, not as members of a crowd.

Therefore, in Judaism, taking a census must always be done in such a way as to signal that we are valued as individuals. We each have unique gifts. There is a contribution only I can bring. God tells Moses to lift people’s heads by showing that they each count; they matter as individuals.

All this has implications for Jewish leadership. The Jewish people always was very small, and yet it has achieved great things. A Jewish leader must respect individuals. He or she must “lift their heads.” However small or large the group you lead, you must always communicate the value you place on everyone. You must never attempt to sway a crowd by appealing to the primitive emotions of fear or hate. You must never ride roughshod over the opinions of others. It is hard to lead a nation of individuals, but this is the most challenging, empowering, inspiring leadership of all.

God, the creator of humanity, having made a covenant with all humanity, then turns to one people and commands them to be different, in order to teach humanity the dignity of difference. Biblical monotheism is not the idea that there is one God and therefore one truth, one faith, one way of life. To the contrary, it is the idea that unity of God is to be found in diversity. That is the miracle of creation. What is real, remarkable and the proper object of our wonder is not the quintessential leaf but the 250,000 different kinds of leaves; not the archetypal bird but the 9,000 species that exist today; not one metalanguage that embraces all others, but the 6,000 languages still spoken throughout the world…

Judaism is about the miracle of unity that celebrates diversity.

The Dignity of Difference, p. 53

1. What does Rabbi Sacks by the term ‘the Dignity of Difference’ and how is this connected to this week’s Covenant & Conversation?

2. What part does the value of the ‘Dignity of Difference’ in the national mission of the Jewish people?