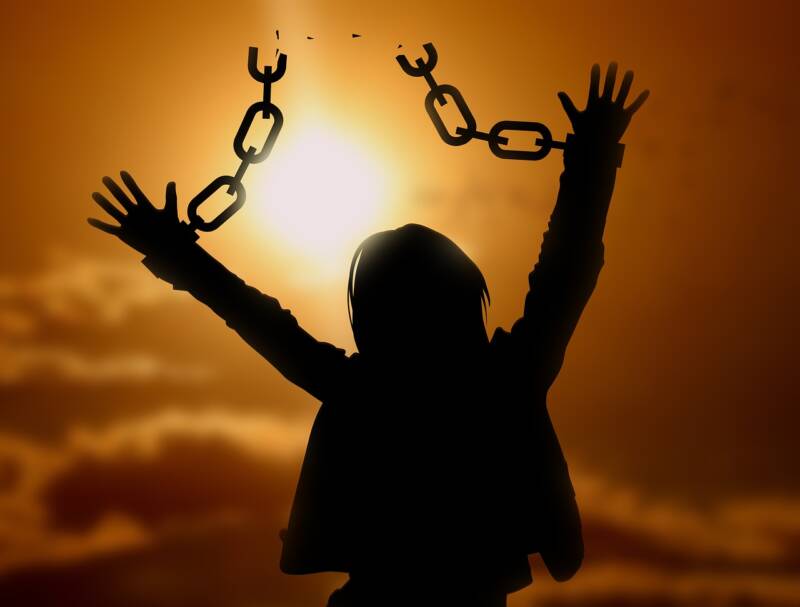 Parshat Behar is just a single chapter, but it transformed the social structure of ancient Israel and provided a unique solution to the seemingly unsolvable conflict between two fundamental ideals: freedom and equality. Much of human history has illustrated the fact that you can have freedom without equality (capitalism/laissez-faire economics), or equality without freedom (communism, socialism), but not both. The powerful insight of the Torah is that you can have both, but not at the same time. Therefore time itself has to become part of the solution, in the form of the seventh year and, after seven sabbatical cycles, the Jubilee year. These function as periodic corrections to the inequalities caused by the free market that allow some to become rich while others suffer the loss of land, home, and even freedom. Through the periodic liberation of slaves, release of debts, and restoration of ancestral lands, the Torah provides an inspiring alternative to individualism on the one hand, collectivism on the other.

Behar sets out a revolutionary model for a society of justice, freedom, and human dignity. At its core is the idea of the Jubilee (the 50th year). One aspect of the Jubilee is the release of slaves (Vayikra 25:39-42). The Torah’s message there is clear. Slavery is wrong. To be “in the image of God” means to have the right to a life of freedom. The very idea of the sovereignty of God means that He alone has claim to the service of humankind. Those who are God’s servants may not be slaves to anyone else.

This is a radical idea that overturned the very foundations of religion in ancient times. The early civilisations – Mesopotamia, Egypt – were based on hierarchies of power which seemed to be seen in the very nature of the cosmos. Just as there were (so it was believed) ranks among the heavenly bodies, so there were on earth. The great religious rituals and monuments were designed to mirror and support these hierarchies.

At the heart of the Jewish story was an idea almost unthinkable to the ancient mind: that God acts in history to liberate slaves – that the supreme Power is on the side of the powerless. It is no accident that Israel was born as a nation under conditions of slavery. It has carried throughout history the memory of those years – the bread of affliction and the bitter herbs of servitude – because the people of Israel serves as an eternal reminder to itself and the world of the moral need for all people to be free in society. The free God desires the free worship of free human beings.

Yet the Torah does not abolish slavery. That is the paradox at the heart of Behar. It was limited and humanised. Every Shabbat slaves were granted rest and a taste of freedom. In the seventh year, Israelite slaves were set free, and if they chose to remain then they had to be released in the Jubilee year. While they were slaves they had to be treated like employees, with no back-breaking or spirit-crushing labour. Everything dehumanising about slavery was forbidden. Yet slavery itself was not banned. Why not? If it was wrong, it should have been outlawed. Why did the Torah allow slavery to exist in any form? Rambam in The Guide for the Perplexed explains the need for time in social transformation. All processes in nature, he argues, are gradual. The foetus develops slowly in the womb. Stage by stage, a child becomes mature. And what applies to individuals applies to nations and civilisations: “It is impossible to go suddenly from one extreme to the other. It is therefore, according to the nature of man, impossible for him suddenly to discontinue everything to which he has been accustomed.”

But surely God can do anything, including changing human nature. Why then did He not simply transform the Israelites, making them capable immediately of the highest values? Rambam gives a simple answer. In miracles, God changes physical nature but never human nature. Were He to do so, the entire project of the Torah – the free worship of free human beings – would have been pointless. There is no greatness in programming a million computers to obey instructions. God’s greatness is in taking the risk of creating a being, humans, capable of choice and responsibility and therefore of freely obeying God.

2. Do you agree with Rambam’s assessment of human nature?

3. Does slavery still exist today? Do you think humanity has finally learned the lesson?

Whatever Rabbi Yochanan had to eat, he would give the exact same food to his slaves. He would explain this action with the following quoted verse: “Did not He who made me in my mother’s womb also make him? Did not the One form us both in the womb? (Iyov 31:15)

1. Is there anything exceptional about Rabbi Yochanan’s behaviour in this story?

2. How did he justify his decision, based on the verse from Iyov?

The modern world has been shaped by four revolutions: the English (1642–1651), the American (1776), the French (1789), and the Russian (1917). Their outcomes were radically different. In England and America, revolution brought war, but led to a gradual growth of civil liberties, human rights, representative government, and eventually, democracy. On the other hand, the French revolution gave rise to the “Reign of Terror” between September 5, 1793, and July 28, 1794, in which more than 40,000 enemies of the revolution were summarily executed. The Russian revolution led to one of the most repressive totalitarianism regimes in history. As many as twenty million people are estimated to have died unnatural deaths under Stalin between 1924 and 1953. In revolutionary France and the Soviet Union, the dream of utopia ended in a nightmare of hell.

What was the difference between them? There are multiple explanations. History is complex and it is wrong to simplify, but one in particular stands out. The English and American revolutions were inspired by the Hebrew Bible as read and interpreted by the Puritans. This happened because of the convergence of a number of factors in the sixteenth and seventeenth centuries: the Reformation, the invention of printing, the rise of literacy and the spread of books, and the availability of the Hebrew Bible in vernacular translations. For the first time, people could read the Bible for themselves.

The French and Russian revolutions, by contrast, were hostile to religion and were inspired instead by philosophy: that of Jean-Jacques Rousseau in the case of France, and of Karl Marx in the case of Russia. There are obvious differences between Torah and philosophy. The most well-known is that one is based on revelation, the other on reason. Yet I suspect it was not this that made the difference to the course of revolutionary politics. Rather, it lay in their respective understandings of time.

God wanted mankind to abolish slavery, but by its own choice, in its own time. Ancient economies were dependent on slavery. Slavery as such was not abolished in Britain and America until the nineteenth century, and in America, not without a civil war. The challenge was: how can one create a social structure in which people will eventually come to see slavery as wrong and freely choose to abandon it?

The  answer lay in the Torah and its legislation, which, in a single deft stroke, changed slavery from an ontological condition (what I am) to a temporary circumstance (a situation in which I find myself, now but not forever). No Israelite was allowed to be treated or to see himself as a slave. He might be reduced to slavery for a period of time, but this was a passing plight, not an identity.

In ancient thought, for example in Aristotle’s philosophy, slavery is an ontological condition, a fact of birth. Some are born to rule, others to be ruled. This is precisely the worldview to which the Torah is opposed. Biblical law is designed to ensure that neither the slave nor his owner should ever see slavery as a permanent condition. A slave should be treated “like an employee or a resident,” in other words, with the same respect as is due a free human being. In this way the Torah ensured that, although slavery could not be abolished overnight, it would eventually be. And so it happened.

That is why we are commanded to hand on the story of the Exodus to our children every Pesach, so that they too taste the unleavened bread of affliction and the bitter herbs of slavery. It is why we are instructed to ensure that every seventh day, all those who work for us are able to rest and breathe the expansive air of freedom. It is why, even when there were Israelite slaves, they had to be released in the seventh year, or failing that, in the Jubilee year. This is the way of evolution, not revolution, gradually educating every member of Israelite society that it is wrong to enslave others so that eventually the entire institution will be abolished, not by divine command but by human consent. The end result is a freedom that is secure, as opposed to the freedom of the philosophers that is all too often another form of tyranny.

Revolutions based on philosophical systems fail because change in human affairs takes time, and philosophy has rarely given an adequate account of the human dimension of time. Revolutions based on Tanach succeed, because they go with the grain of human nature, recognising that it takes time for people to change. The Torah did not abolish slavery, but it set in motion a process that would lead people to come of their own accord to the conclusion that it was wrong. That it did so, albeit slowly, is one of the wonders of history.

The supreme expression of the American faith was the Declaration of Independence (1776), largely drafted by Jefferson. In one of the most famous of all political affirmations, it stated: “We hold these truths to be self-evident, that all men are created equal, that they are endowed by their Creator with certain unalienable rights, that among these are life, liberty, and the pursuit of happiness.” The striking thing about this sentence is that “these truths” are anything but self-evident. Most societies at most times have held as self-evidently true that we are created unequal. Some are born to rule, others to be ruled. Every ancient myth, dogma, and creed with the exception of the Hebrew Bible was a justification for inequality and hierarchy, a canonisation of the status quo. Plato held that society was stratified into three classes: guardians (philosopher-kings), auxiliaries (soldiers), and the rest; and that whether or not these distinctions were given by birth, people should be taught that they were. Aristotle believed that some people were born to be slaves. Gradations of class were written into the structure of reality. The strong, powerful, wealthy, and highborn were meant (whether by nature or by God) to exercise supremacy over others. Jefferson’s “truths” were self-evident only to a culture steeped in the Hebrew Bible, from its opening declaration that the human individual is “the image of God,” to its enactment in history in the Exodus and the covenant at Mount Sinai.

1. If this value was the basis for the American Declaration of Independence, why do you think slavery continued to exist in America for almost another 100 years?

2. Do you think there is a connection between slavery and racism? How can the ideas explored in this week’s Covenant & Conversation address racism in society today?