Against Their Gods
Family Edition 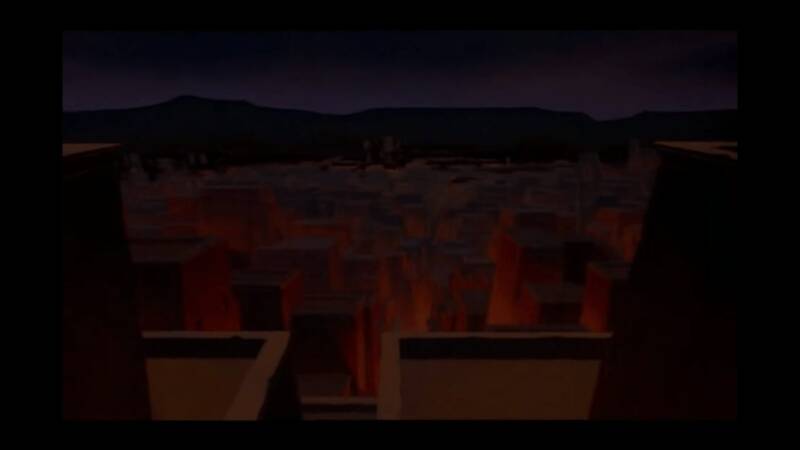 The parsha of Bo details the last three of the plagues and the institution of Passover, both at the time of the exodus itself and as it was subsequently to be celebrated. God sends the eighth and ninth plagues, locusts and darkness, but Pharaoh still refuses to free the Israelite slaves. God tells Moses that the tenth plague will be the killing of all the firstborn Egyptians and commands each Israelite home to slaughter a lamb and spread the blood on their doorposts, in order to protect their firstborns. After the death of the firstborns, Pharaoh demands that the Israelites leave. The long exile is at an end. The Israelites have begun their journey to freedom.

The ninth plague – darkness – comes shrouded in a darkness of its own. What is this plague doing here? It seems out of sequence. So far there have been eight plagues, and they have become steadily and increasingly more serious. The first two, blood and frogs, seemed more like signs than anything else. The third and fourth, gnats and wild beasts, caused worry, not crisis. The fifth, the plague that killed livestock, affected animals, not human beings. The sixth, boils, was again a discomfort, but more serious this time. The seventh and eighth, hail and locusts, destroyed the Egyptian grain. Together with the previous loss of livestock, now there was no food. Still to come was the tenth plague, the death of the firstborn, that would eventually break Pharaoh. So we would expect the ninth plague to be very serious indeed.

Instead it seems to be an anticlimax. Darkness is a nuisance, but no more. The phrase “darkness that can be felt” suggests what happened: a khamsin, a sandstorm usually produced by a southern wind that blows into Egypt from the Sahara Desert, was probably not unusual for Egyptians, especially at this time of year in the spring. It can last for several days and produce sand- and dust-filled air that obliterates the light of the sun. The ninth plague was no doubt unusual in its intensity, but it was not an event unfamiliar to the Egyptians, then or now. Why then does it figure in the plague story, and why did it not happen nearer the beginning, as one of the less severe plagues?

The answer lies in a line from “Dayeinu,” the song we sing as part of the Haggadah: “If God had executed judgment against them [the Egyptians] but had not done so against their gods, it would have been sufficient.” And this sentiment is also found in the Torah itself: “I will perform acts of judgment against all the gods of Egypt: I (alone) am God.” (Exodus 12:12)

Not all the plagues were directed, in the first instance, against the Egyptians. Some were directed against things they worshipped as gods. That is the case in the first two plagues. The Nile was considered the god of fertility and frogs were associated with the goddess who was present at births. The plagues were not only intended to punish Pharaoh and his people for their mistreatment of the Israelites, but also to show them the powerlessness of the gods in which they believed. The greatest god in the Egyptian pantheon was Ra the sun god. The obliteration of the sun was a message – that there is a power greater than Ra – God.

1. What objectives were the plagues designed to achieve?

2. For whose benefit were the plagues?

3. Why does God, who is all-powerful, need to prove that the Egyptian gods were not true?

Here is a translation of the Chad Gadya song from the Pesach Haggadah:

Then came the Holy One and slew the angel of death, who slew the slaughterer who slew the ox who drank the water that put out the fire that burned the stick that hit the dog who bit the cat who ate the goat my father bought for two zuzim; one little goat, one little goat.

1. What do you think all the characters in this story represent? What is the overall message of the song? Why do you think this song is found in the Haggadah?

As set out in The Core Idea above, the plagues were not only intended to punish Pharaoh and his people for their mistreatment of the Israelites, but also to show them the powerlessness of the gods in which they believed. The symbolism of these plagues, often lost on us, would have been immediately apparent to the Egyptians.

By first ordering the midwives to kill all male Israelite babies, and then, when that failed, by commanding, “Every boy who is born must be cast into the Nile” (Exodus 1:22), Pharaoh had turned what should have been symbols of life (the Nile, which fed Egyptian agriculture, and midwives) into agents of death. The river that turned to blood, and the frogs (that represent childbirth in Egyptian culture) that infested the land, were not afflictions as such, but rather coded communications, as if to say to the Egyptians: reality has an ethical structure. See what it feels like when the gods you turned against the Israelites turn on you. If used for evil ends, the powers of nature will turn against man, so that what he does will be done to him in turn. There is justice in history.

Hence the tenth plague, to which all the others were a mere prelude. Whereas the first two plagues were symbolic representations of the Egyptian murder of Israelite children, the tenth plague was the enactment of retributive justice, as if heaven was saying to the Egyptians: You committed, or supported, or passively accepted the murder of innocent children. There is only one way you will ever realise the wrong you did, namely, if you yourself suffer what you did to others.

This too helps explain the difference between the two words the Torah regularly uses to describe what God did in Egypt: otot u’moftim, “signs and wonders.” These two words are not two ways of describing the same thing – miracles. They describe quite different things. A mofet, a wonder, is indeed a miracle. An ot, a sign, is something else: a symbol (like tefillin or circumcision, both of which are called ot), that is to say, a coded communication, a message.

The significance of the ninth plague is now obvious. The greatest god in the Egyptian pantheon was Ra or Re, the sun god. The name of the Pharaoh often associated with the Exodus, Ramses II, means meses, ”son of “ (as in the name Moses) Ra, the god of the sun. Egypt – so its people believed – was ruled by the sun. Its human ruler, or Pharaoh, was semi-divine, the child of the sun god.

The plague of darkness was not a mofet but an ot, a sign. The obliteration of the sun signalled that there is a power greater than Ra. Yet what the plague represented was less the power of God over the sun, but the rejection by God of a civilisation that turned one man, Pharaoh, into an absolute ruler (son of the sun god) with the ability to enslave other human beings – and of a culture that could tolerate the murder of children because that is what Ra himself did.

When God told Moses to say to Pharaoh, “My son, My firstborn, Israel,” He was saying: I am the God who cares for His children, not one who kills His children. The ninth plague was a divine act of communication that said: there is not only physical darkness but also moral darkness. The best test of a civilisation is to see how it treats children, its own and others’. In an age of broken families, neglected and impoverished children, and worse – the use of children as instruments of war – that is a lesson we still need to learn.

There can be no doubt that the religion of ancient Israel was one of the most stunning transformations ever wrought in humanity’s moral imagination, never more so than in the fact of the Exodus itself. In antiquity the gods were on the side of the established power. They underwrote the reign of kings, emperors, and princes – an idea revived in Europe in the Middle Ages in the form of the doctrine of the “divine right of kings.” Rulers ruled because they were gods, or children of gods, or prime intermediaries between the gods and mankind. They held sway on earth for the same reason as did the sun in the sky: there was an order on earth as in heaven, by which the strong ruled the weak, and power was the guarantor of order. That God, creator of heaven and earth, might intervene in history to liberate slaves was the ultimately unthinkable. Thus a paradox was born, which ever since has inspired men and women to break the chains of their oppression: that true power is distinguished by its concern for the powerless, that greatness is measured by the ability to hear the cry of the otherwise unheard – the weak, the vulnerable, “the widow, the orphan, and the stranger” – and that freedom is not worthy of its name unless it means freedom for all.

The Jonathan Sacks Haggadah, from the essay, “Building a Society of Freedom”

1. How is Judaism a protest against hierarchy?

2. How was this message broadcast to the world throughout history through the Exodus narrative?