On Judaism and Islam
Family Edition 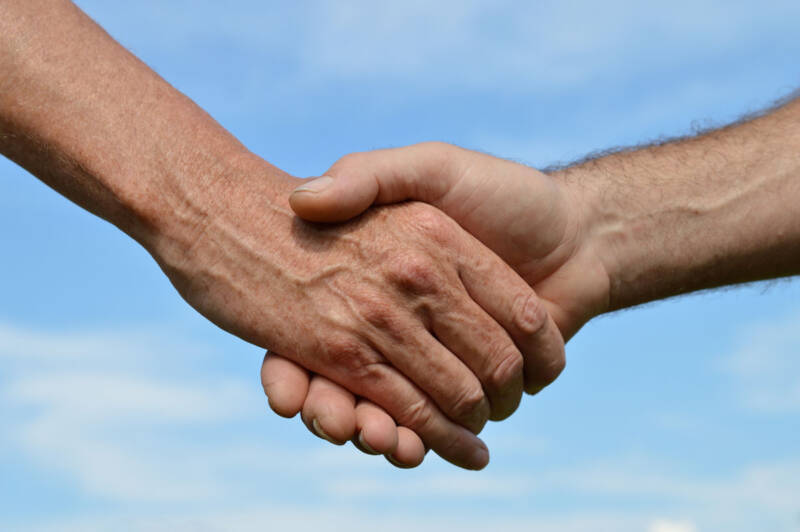 On Judaism and Islam

Chayei Sara contains three stories: the death of Sara and Avraham’s purchase of a burial plot for her, the Cave of Machpelah, which was the first part of the Holy Land to be owned by the Jewish People; the search for a wife for Yitzchak, the first Jewish child; and the last period of Avraham’s life, and his death.

In last week’s parsha we saw that after the birth of Yitzchak, Sara was upset by the presence of Avraham’s first wife Hagar, and their son Yishmael, in the house of Avraham. She demanded that Avraham send them away and God told Avraham to listen to his wife.

Yet in this week’s parsha we see a strange detail in the description of Avraham’s death:

And Avraham expired, and died in a good old age, an old man, and full of years, and was gathered to his people. Yitzchak and Yishmael, his sons, buried him in the Cave of Machpelah, in the field of Ephron the son of Zohar the Hittite, which is before Mamre, the field which Avraham purchased of the children of Het. There was Avraham buried, and Sara his wife. (Gen. 25:8-10)

Yishmael’s presence at the funeral is surprising. After all, he had been sent away into the desert years before, when Yitzchak was young. Until now, we have assumed that the two half-brothers have lived in total isolation from one another. Yet the Torah places them together at the funeral without a word of explanation.

There is a Midrash in Pirkei deRabbi Eliezer, which may shed some light on this. It tells of how Avraham visited his son Yishmael twice after he had sent him away. On the first occasion, Yishmael was not at home. His wife, not knowing Avraham’s identity, refused to give the stranger bread and water. Yishmael divorced her and married a woman named Fatimah. This time, when Avraham visited, again in disguise, the woman gave him food and drink. The Midrash then says “Avraham stood and prayed before the Holy One, blessed be He, and Yishmael’s house became filled with all good things. When Yishmael returned, his wife told him about it, and Yishmael knew that his father still loved him.” Father and son were reconciled.

1.   What reason do you think Sara had to demand from Avraham that he send Hagar and Yishmael away?

2.   Why do you think this was hard for Avraham to do?

Shlomo Galster, an elderly Hasidic man from the north of Israel lay dying in his hospital bed in Ha’emek Medical Center in Afula. He had contracted Covid-19 a month previously, and the medical staff attending to him knew he was nearing the end of his life. They contacted his family to come immediately and say his goodbyes, but he was declining rapidly and the family would not be able to make it in time. Shlomo lay dying alone.

Maher Ibrahim, an arab nurse in the hospital, had been treating him since he was hospitalized, and as with all his patients he felt deep compassion and care towards him. He knew the man would wish to say the Shema before he passed away, but had no one by his side who could help him do this. So Maher did it himself.

“I knew he was a religious man and it was important to him that his family pray with him,” Ibrahim, who was raised Muslim, said later when interviewed by the press. “I don’t know the entire prayer exactly, but I knew how important it was that he hear the words ‘Shema Yisrael.’ We knew him and his family. We were fond of him. We prayed with him, for his own sake and his family.” Ibrahim added, “It was clear to me that he wanted us to recite the ‘Shema prayer for him. We have one God.”

When the family arrived, they were comforted to know what had happened. Shlomo’s daughter told the reporters: “It was a difficult, sad day. My father never stopped talking about the devoted care he received and how thankful he was to Maher and the entire team.”

The story quickly went rival, Maher inspiring so many in Israel because of his deep humanity, proving once again all humans have so much more in common than what sets us apart from each other. Some months later, Maher was officially honored by the State of Israel when he was giving the honor of lighting a torch during the official ceremony for Israel’s 73rd Independence Day.

1.   According to the Torah, Jews and Arabs are cousins. Does this make it easier or harder to understand why they sometimes fight?

Beneath the surface of Chayei Sara is another story, with three important clues waiting in the text.

The first occurs when Avraham’s servant is returning with the woman who is to become Yitzchak’s wife. As Rebecca sees Yitzchak in the distance, we are told that he is “coming from the way of Be’er-lahai-ro’i” (Gen. 24:62) to meditate in the field. Where is Be’er-lahai-ro’i and what is its significance?

The second is the final stage of Avraham’s life. For chapter after chapter we read of the love and faithfulness Avraham and Sara had for one another. Then Sara’s life draws to a close. Avraham mourns and weeps for her and buys a cave in which she is buried. We might then expect to read that Avraham lived out the rest of his years alone before being placed beside “Sara his wife” in the Cave of Machpelah.

Unexpectedly, however, once Yitzchak is married, Avraham marries a woman named Keturah and has six children with her. We are told nothing else about this woman, and the significance of the episode is unclear. But the Torah does not include mere incidental details. So what is the significance of Avraham’s second marriage and how is it related to the rest of the story?

The third clue is revealed in the Torah’s description of Avraham’s death – the surprising presence of Yishmael at Avraham’s funeral. The Sages pieced together these three puzzling details to form an enthralling story.

First, they point out that Be’er-lahai-ro’i, the place from which Yitzchak was coming, is mentioned once before, in Genesis (16:14): It is the spot where Hagar, pregnant and fleeing from Sara, encountered an angel who told her to return. It is indeed she who gives the place its name, meaning “the well of the Living One who sees me”. The Midrash says that Yitzchak was there looking for Hagar, because he said, “Shall I be married while my father lives alone? I will go and return Hagar to him.”

This also explains the second question: who was Keturah? The Sages tell us she was Hagar. Hagar was also called Keturah because “her acts gave forth fragrance like incense (ketoret).” This together with the Midrash we saw, also answers the third question, and helps complete the challenging narrative of the expulsion of Hagar and Yishmael. Hagar did not end her days as an outcast and Yishmael and Avraham did not remain estranged. Hagar returned, at Yitzchak’s prompting and with Avraham’s consent, to become the wife of her former master, and Yishmael and Avraham were ultimately reconciled.

In that Midrash in Pirkei deRabbi Eliezer, the name of Yishmael’s second wife, Fatimah, is highly significant. In the Koran, Fatimah is the daughter of Mohammad. Pirkei deRabbi Eliezer is making an explicit, and positive, reference to Islam. The hidden story of Chayei Sara has immense consequence for our time. Jews and Muslims both trace their descent from Avraham – Jews through Yitzchak, Muslims through Yishmael.

The fact that both sons stood together at their father’s funeral tells us that they too were reunited.

Beneath the surface of the narrative in Chayei Sara, the Sages read the clues and pieced together a moving story of reconciliation between Avraham and Hagar on the one hand, Yitzchak and Yishmael on the other.

Yes, there was conflict and separation; but that was the beginning, not the end. Between Judaism and Islam there can be friendship and mutual respect. Avraham loved both his sons, and was laid to rest by both. There is hope for the future in this story of the past.

At the heart of all three faiths is the idea that within humanity there is one privileged position – favoured son, chosen people, guardian of the truth, gatekeeper of salvation – for which more than one candidate competes. The result is conflict of the most existential kind, for what is at stake is the most precious gift of all: God’s paternal love. One group’s victory means another’s defeat, and since this is a humiliation, a dethronement, it leads to revenge. So the strife is perpetuated…

On the surface, the story of Yitzchak and Yishmael is about sibling rivalry and the displacement of the elder by the younger. Beneath the surface, however, the Sages heard a counter-narrative telling the opposite story: the birth of Yitzchak does not displace Yishmael. To be sure, he will have a different destiny. But he too is a beloved son of Avraham, blessed by his father and by God. He becomes a great nation. God stays with him to ensure that his children flourish and become ‘twelve rulers’. Avraham and Yitzchak both make a journey of reconciliation. The two half-brothers stand together at their father’s grave. There is no hostility between them. Their futures diverge, but they do not compete for God’s affection, which encompasses them both. This reading becomes all the more powerful when, in the Midrash, it is extended to the relationship between Judaism and Islam.

This is the first indication of what will, in the next few chapters, emerge as a systemic feature of the biblical text. In each narrative of apparent choice-and-rejection, there is a counter-narrative that subverts the surface story and presents a more nuanced, generous picture of divine (and, by implication, human) sympathy. It is never blatant. It never unequivocally announces itself. But it is unmistakably there in the text…

The surface narrative is itself revolutionary. It asserts that the hierarchy of the ancient world – where the elder is destined to rule, the younger to serve – was about to be overthrown. The counter-narrative is more radical still, because it hints at the most radical of monotheism’s truths: that God may choose, but God does not reject. The logic of scarcity – of alpha males and chosen sons – has no place in a world made by a God whose ‘tender mercies are on all His works’ (Psalm 145:9).

1.   What do Yishmael and Esau have in common? Why do you think their stories in the Torah can be described as “revolutionary”?

2.   The “counter-narrative” that is hidden in the text below the surface, is even more radical. Why do you think Rabbi Sacks describes it in this way and what is his message? How can this idea help us solve religious violence in our world today?