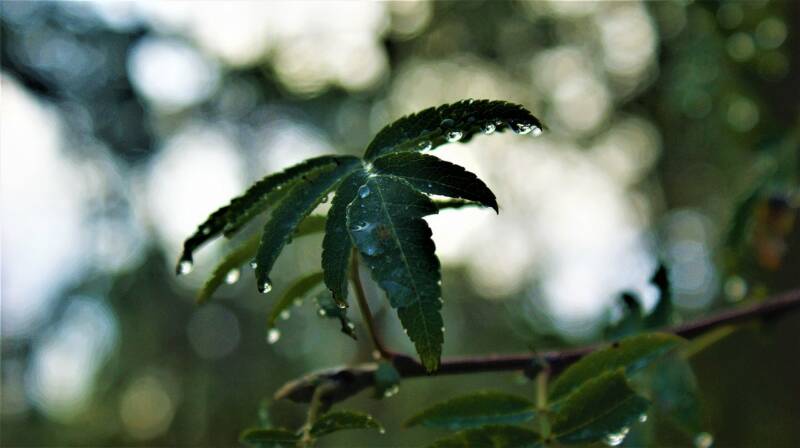 Let My Teaching Drop as Rain

Parshat Ha’azinu mainly consists of the song Moshe sings as his last lesson to the Israelites, before he blesses them and ascends Mount Nebo to die. The song expresses in poetry the relationship between God and Bnei Yisrael, and the promises we made to one another. The image created through the verses is that of God, sitting on the throne of justice and passing judgement on our lives. Since the days of the Bible, this idea has been carried through to the High Holy Days of Rosh Hashanah and Yom Kippur where we reflect on our year and imagine God weighing our mitzvot and averot. Moshe’s song went straight through, not just to the minds of his listeners but also to their emotions and imaginations. The theme is simple and clear: God is just. It is we humans who are the source of injustice in the world.

In the glorious song of Ha’azinu, Moshe invites the people to think of the Torah like the rains that water the world so that it brings forth its produce: “Let My teaching drop as rain, My words descend like dew, Like showers on new grass, Like abundant rain on tender plants.” (Devarim 32:2)

God’s word is like rain in a dry land. It brings life. It makes things grow. There is much we can do ourselves: we can plough the earth and plant the seeds. But in the end our success depends on something beyond our control. If no rain falls, there will be no harvest, whatever preparations we make. So it is with Israel. We must never be tempted into arrogance and say: “My power and the strength of my hands have produced this wealth for me” (Devarim 8:17).

The Sages, however, sensed something more in the comparison of the Torah to rain. This is how Sifrei (a collection of commentaries on Bamidbar and Devarim dating back to the Mishnaic period) puts it:

Let my teaching drop as rain: Just as the rain is one thing, yet it falls on trees, enabling each to produce tasty fruit according to the kind of tree it is – the vine in its way, the olive tree in its way, and the date palm in its way – so the Torah is one, yet its words produce Scripture, Mishnah, laws, and traditions. Like showers on new grass: Just as showers fall upon plants and make them grow, some green, some red, some black, some white, so the words of Torah produce teachers, worthy individuals, Sages, the righteous, and the pious.

There is only one Torah, yet it has many effects. It gives rise to different kinds of teaching, different sorts of virtue. Torah is sometimes seen by its critics as too strict and narrow, as if it seeks to make everyone the same. The Midrash argues otherwise. The Torah is compared to rain precisely to emphasise that its most important effect is to make each of us grow. To each reach our full potential. We are not all the same, and the Torah does not seek uniformity. As a famous Mishnah puts it: “When a human being makes many coins from the same mint, they are all the same. God makes everyone in the same image – His image – yet none is the same as another” (Mishnah Sanhedrin 4:5).

2. How are all people different? How are you different to your family and friends?

3. How can the Torah affect different people differently?

XR-27 wasn’t just any robot. Her identification plate read “XR-27: The best, most modern robot”. She was, indeed, very clever, fast, and multi-skilled. Of course, this made her feel very proud. So much so, that when she saw other robots in the street, she would look at them with a certain air of superiority; she reserved her friendly greetings only for other XR-27s.

“All robots should be like us XR-27s”, she thought to herself. She was convinced that the world would be a much better place if only all robots were like herself.

One day, she was walking along, when a big yellow door suddenly appeared, right in front of her piezoelectric optical sensors (that’s eyes to you and me, but XR-27 liked to use highly-technical sounding words for everything). She had no idea where the door had come from, but she was intrigued by the accompanying door sign that read, “XR-27 CITY”. She went through the doorway and looked around in delight. All of the city’s inhabitants were XR-27s. Every single one of them. Every type of robot in the city had been upgraded to the XR-27 model.

Excited at having found her perfect city, she set to exploring, stopping from time to time to talk to other robots, telling them what a great thing it was to be an XR-27. Of course, they agreed.

The days passed, but she started to realise that there was something about this new world that she didn’t like. She was bored. All the XR-27 robots were just as brilliant as she was, at everything. But this meant that none of them had any distinct gift, talent or even personality. They were all the same. She realised that she didn’t feel special any more. On top of that, everyone could do things equally well, which made it impossible for anyone to stand out from the crowd. Whenever she did anything which she thought fantastic, it turned out that the other robots had done exactly the same thing and at the same time. So what was her purpose there?

She realised that she would much prefer to meet a clumsy-but-fun TP-4, and spend a while chatting with it, than to see yet another XR-27. So she started searching for that big yellow door. It took her several days to find it, but finally she did.

Just like before, it was standing in the middle of a normal street. She put her hand on the door and looked behind her, as if saying farewell to the city that had at first seemed so perfect. Then, she gave the door a joyful push…

Adapted from The Best Robot by P.P.Sacristan

1. What if we could all be upgraded to the same technological model? What would our world look like if we were all the same?

2. With your own unique personality and abilities, how can you use your talents to make a positive impact on the world?

The emphasis on diversity is a recurring theme in Judaism. For example, when Moshe asks God to appoint his successor, he uses an unusual phrase: “May the Lord, God of the spirits of all humankind, appoint a man over the community” (Bamidbar 27:16). On this, Rashi comments:

Why is this expression (“God of the spirits of all humankind”) used? [Moshe] said to Him: Lord of the universe, You know each person’s character, and that no two people are alike. Therefore, appoint a leader for them who will bear with each person according to his or her disposition.

One of the fundamental requirements of a leader in Judaism is that he or she is able to respect the differences between human beings. This is a point emphasised by Maimonides in Guide for the Perplexed:

Humans are, as you know, the highest form in creation, and they therefore includes the largest number of constituent elements. This is why the human race contains so great a variety of individuals that we cannot discover two persons exactly alike in any moral quality or in external appearance…. This great variety and the necessity of social life are essential elements in human nature. But the well-being of society demands that there should be a leader able to regulate the actions of humans. The leader must complete every shortcoming, remove every excess, and prescribe for the conduct of all, so that the natural variety should be counterbalanced by the uniformity of legislation, so that social order be well established.

The political problem as Rambam sees it is how to regulate the affairs of human beings in such a way as to respect their individuality while not creating chaos. A similar point emerges from a surprising rabbinic teaching: “Our Rabbis taught: If one sees a crowd of Israelites, one says: Blessed Be He who discerns secrets – because the mind of each is different from that of another, just as the face of each is different from another” (Brachot 58a).

We would have expected a blessing over a crowd to emphasise its size, its mass: human beings in their collectivity. A crowd is a group large enough for the individuality of the faces to be lost. Yet the blessing stresses the opposite – that each member of a crowd is still an individual with distinctive thoughts, hopes, fears, and aspirations.

The same was true for the relationship between the Sages. A Mishnah states:

There was no single template of the Sage. Each had his own distinctive merits, his unique contribution to the collective heritage. In this respect, the Sages were merely continuing the tradition of the Torah itself. There is no single role model of the religious hero or heroine in Tanach. The patriarchs and matriarchs each had their own unmistakable character. Moshe, Aaron, and Miriam each emerge as different personality types. Kings, Priests, and Prophets had different roles to play in Israelite society. Even among the Prophets, “No two prophesy in the same style,” said the Sages (Sanhedrin 89a). Elijah was zealous, Elisha gentle. Hosea spoke of love, Amos spoke of justice. Isaiah’s visions were simpler and less opaque than Ezekiel’s.

The same applies to even to the revelation at Sinai itself. Each individual heard, in the same words, a different inflection:

The voice of the Lord is with power (Psalms 29:4): that is, according to the power of each individual, the young, the old, and the very small ones, each according to their power [of understanding]. God said to Israel, “Do not believe that there are many gods in heaven because you heard many voices. Know that I alone am the Lord your God.”

According to Maharsha, there are 600,000 interpretations of Torah. Each individual is theoretically capable of a unique insight into its meaning. The French philosopher Emmanuel Levinas commented:

The Revelation has a particular way of producing meaning, which lies in its calling upon the unique within me. It is as if a multiplicity of persons…were the condition for the plenitude of “absolute truth,” as if each person, by virtue of his own uniqueness, were able to guarantee the revelation of one unique aspect of the truth, so that some of its facets would never have been revealed if certain people had been absent from mankind.

Judaism, in short, emphasises the other side of the maxim E pluribus unum (“Out of the many, one”). It says: “Out of the One, many.” The miracle of creation is that unity in heaven produces diversity on earth. Torah is the rain that feeds this diversity, allowing each of us to become what only we can be.

‘God’, wrote Rabbi Abraham Kook, ‘dealt kindly with his world by not putting all the talents in one place, in any one human, or nation, not in one generation or even one world.’

Each culture has something to contribute to the totality of human wisdom.

The Sages said: ‘Who is wise? One who learns from all people.’

The Dignity of Difference, p. 64

1. How are these ideas from Rabbi Sacks, Rav Kook and the Sages in Pirkei Avot, connected to the message of this week’s Covenant & Conversation?

2. Why is this message so central to Jewish thought?