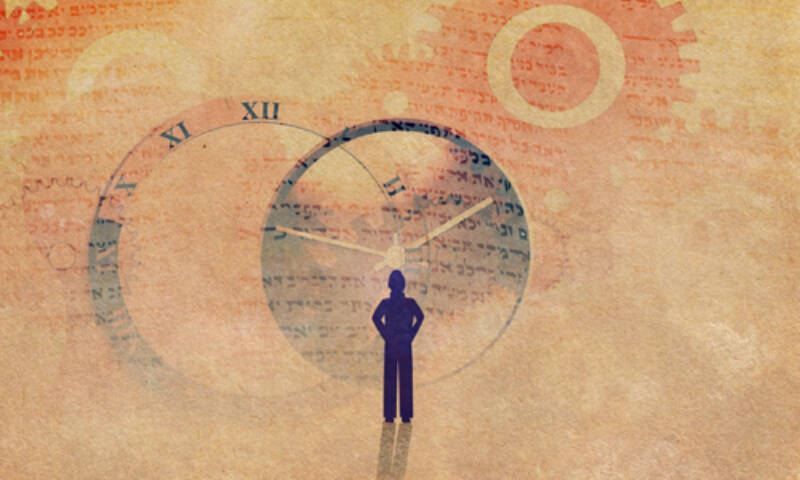 Ki Tissa begins with the final details about the Sanctuary, including a collection of money that was to serve as a census to count the Israelite population. The parsha then tells one of the most gripping stories in Jewish history. The people, confused and panicking without the leadership of Moshe (who is up the mountain, receiving the tablets from God), make a Golden Calf and dance before it. God tells Moshe to go down. Moshe does, and in his anger he smashes the tablets. He lectures the people, then returns to the mountain to beg God to forgive them. Eventually Moshe again descends Mount Sinai, with a second set of tablets, unaware that his face is now radiating light.

It is a moment of the very highest drama. The Israelites, a mere forty days after God revealed Himself to them at Sinai, have made an idol: a Golden Calf. God threatens to destroy them: “I have seen these people,” the Lord said to Moshe, “and they are a stiff-necked people. Now leave Me alone so that My anger may burn against them and that I may destroy them. Then I will make you into a great nation.” (Exodus 32:9).

Moshe, demonstrating a perfect example of the character of Israel as one who “wrestles with God and man,” (Exodus 32:29) confronts both Israel and God. To God, he prays for mercy for the people. Coming down the mountain and facing Israel, he smashes the tablets, the symbol of the covenant. He grinds the calf to dust, mixes it with water, and makes the Israelites drink it. He tells the Levites to punish the wrongdoers.

Then he climbs the mountain once again and tries to re-establish the shattered relationship between God and the people. God accepts Moshe’ request and tells him to carve two new tablets of stone. At this point, however, Moshe makes a strange demand:

“And Moshe hurried and knelt to the ground and bowed, and he said, ‘If I have found favour in your eyes, my Lord, may my Lord go among us, because [ki] it is a stiff-necked people, and forgive our wickedness and our sin, and take us as your inheritance.’” (Exodus 34:8-9)

The difficulty in the verse is obvious. The reason Moshe gives God for forgiving the Israelites is the very trait that God had previously given as a reason to abandon them: How can Moshe use the people’s stubbornness as the very reason for God to continue His presence among them? What is the meaning of Moshe’ “because” – “may my Lord go among us, because it is a stiff-necked people”?

The commentators offer a variety of interpretations. Rashi reads the word ki as “if” – “If they are stiff-necked, then forgive them.” Ibn Ezra and Chizkuni read it as “although” or “despite the fact that” (af al pi). These are straight-forward readings, though they assign to the word ki a meaning it does not normally have. Nachmanides takes a different approach. Precisely because of the rebelliousness of Israel, this requires the close attention of a forgiving God – like a rebellious child for whom the kindest cure is the attention and concern of a loving parent.

There is, however, another far more striking interpretation that can be traced across the centuries. In the twentieth century it was voiced by Rabbi Yitzchak Nissenbaum. The fact that Rabbi Nissenbaum lived and died in the Warsaw Ghetto makes his words all the more powerful:

Almighty God, be patient with this people, because what is now their greatest flaw will one day be their most heroic quality. They are indeed a stubborn people. When they have everything to thank You for, they complain. Mere weeks after hearing Your voice they make a Golden Calf. But just as now they are stiff-necked in their disobedience, so one day they will be equally stiff-necked in their loyalty. Nations will call on them to assimilate, but they will refuse. Mightier religions will urge them to convert, but they will resist. They will suffer humiliation, persecution, even torture and death just because of the people they belong to and the faith they have, but they will stay true to the covenant their ancestors made with You. They will go to their deaths saying Ani ma’amin, “I believe.” This is a people awesome in its obstinacy – and though now it is their failing, there will be times far into the future when it will be their noblest strength.

1. Do you think Jews are a stubborn people? Can you give examples?

2. When a parent describes their child as stubborn, is that a good thing or a bad thing? How is this similar to God and His relationship to the Jewish people?

3. How does the context of who Rabbi Yitzchak Nissenbaum was and where he lived make his words particularly powerful?

The following story was told by the Jewish historian Shlomo ibn Verga in the 15th century, whilst discussing the Jews’ expulsion from Spain:

I heard from some of the elders who came out of Spain that one of the boats was infested with the plague, and the captain of the boat forced the passengers to disembark at some uninhabited place. Most of them died there of starvation, while some gathered up all their strength to set out on foot in search of a settlement. There was one Jew among them who struggled on foot together with his wife and two children. The wife grew faint and died from the challenging journey. The husband continued on, carrying his children until both he and they fainted from hunger. When he regained consciousness, he found that his two children had died.

In deep grief he rose to his feet and cried out: “O Lord of all the universe, You are trying hard to give me reason to lose my faith. But know this my Lord, – even against the will of heaven – a Jew I am and a Jew I will always be. Nothing that You have already done to me, nor anything that You will in the future cause to happen to me, will change that.” He then buried his children and continued on, in search of a settlement.

1. Do you find this story depressing, or inspiring and heroic? Can it be both?

2. How is this story connected to The Core Idea?

One is awestruck by the faith described in The Core Idea and It Once Happened. Such faith – such obstinate faith. Almost certainly it was this idea that lies behind a famous Talmudic passage about the giving of the Torah at Mount Sinai:

And they stood under the mountain: R. Avdimi b. Chama b. Chasa said: This teaches that the Holy One blessed be He, overturned the mountain above them like a barrel and said, “If you accept the Torah, it will be well. If not, this will be your burial place.” R. Akha b. Yaakov observed: This constitutes a strong protest against the Torah. Said Rava: Even so, they re-accepted it in the days of Ahasuerus, for it is written, the Jews confirmed and took upon them, meaning, “they confirmed what they had accepted before.” (Talmud Bavli Shabbat 88a)

The meaning of this strange text seems to be this: at Sinai (according to R. Avdimi) the Jewish people had no choice but to accept the covenant. They had just been rescued from Egypt. God had divided the sea for them; He had sent them manna from heaven and water from the rock. Acceptance of a covenant under such conditions cannot be called free.

The real test of faith came when God was hidden. Rava’s quotation from the Book of Esther is pointed and precise. Megillat Esther does not contain the name of God. The rabbis suggested that the name Esther is an allusion to the phrase haster astir et panai, “I will surely hide My face.” The book relates the first warrant for genocide against the Jewish people. That Jews remained Jews under such conditions was proof positive that they did indeed reaffirm the covenant. Obstinate in their disbelief during much of the biblical era, they became obstinate in their belief ever afterwards. Faced with God’s presence, they disobeyed Him. Confronted with His absence, they stayed faithful to Him. That is the paradox of the stiff-necked people.

Not by accident does the main narrative of the Book of Esther begin with the words “And Mordechai would not bow down” (Esther 3:1). His refusal to defer to Haman sets the story in motion. Mordechai is also obstinate, and if there is one thing that is hard to do with a stiff neck, it is bowing. At times, Jews found it hard to bow down to God – but they were certainly never willing to bow down to anything less. That is why, alone of all the many peoples who have entered the arena of history, Jews – even in exile, dispersed, and everywhere a minority – neither assimilated to the dominant culture nor converted to the majority faith.

“Forgive them because they are a stiff-necked people,” said Moshe, because the time will come when that stubbornness will be not a tragic failing but a noble and defiant loyalty. And so it came to be.

After the Holocaust, a ravaged, devastated people came back to the land of Israel and built there one of the great states of the modern world. Out in the wilderness they built farms and planted forests. In place of the totalitarian states from which many of them came, they framed a democracy. From a small population they created an army of invincible courage. In place of Jerusalem “in mourning and in ruins” they created a Jerusalem built “as a city that is closely joined together.” They made the Hebrew language, the language of the Bible, live again. They built yeshivot, citadels of Jewish education, so that the streets of Jerusalem would once again echo with the sound of ancient learning. They brought Jewish communities, threatened by persecution, to safety. Together they brought about the collective resurrection of the Jewish people from the shadow of death to the land of life. Today when Jews sing of Israel they say od lo avdah tikvatenu, “Our hope is not destroyed.”

If you were to ask what our response to the Holocaust should be, I would say this: Marry and have children, bring new Jewish life into the world, build schools, make communities, have faith in God who had faith in man and make sure that His voice is heard wherever evil threatens. Pursue justice, defend the defenceless, have the courage to be different and fight for the dignity of difference. Recognise the image of God in others and defeat hate with love. Twice a year, on Yom Hashoah and the Ninth of Av, sit and mourn for those who died and remember them in your prayers. But most of all, continue to live as Jews.

When I stand today in Jerusalem, or in a Jewish school, or see a Jewish couple under the wedding canopy, or observe parents at the Shabbat table blessing their children, there are times when I am overcome with tears, not in sadness nor in joy, but in awe at this people who came face to face with the angel of death and refused to give it a final victory. The Jewish people lives, and still bears witness to the living God.

1. According to Rabbi Sacks, what is the most important response to the Holocaust?

2. How is this text connected to the ideas in the rest of Covenant & Conversation?