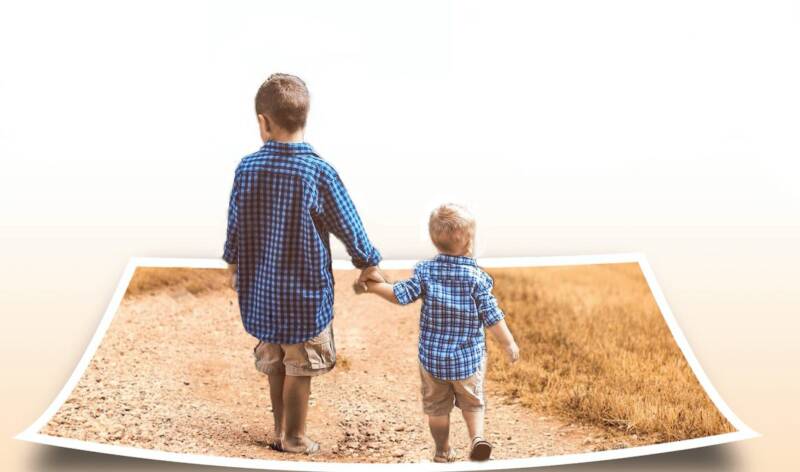 In Tetzaveh, the role of the priests in the service of the Tabernacle takes centre stage. For once the limelight is no longer turned on Moshe, but on his brother Aharon, the High Priest. We read about the tasks of the priesthood, their robes of office and their consecration, as well as further details about the Tabernacle itself.

Tetzaveh is the only parsha where the name of Moshe is not mentioned at all since the first parsha of the book of Shemot (in which he is born). Here, just this once, Moshe, our hero, the leader, the liberator, the lawgiver, is off-stage. Instead our focus is on his elder brother Aharon who, elsewhere, is often in the background. Indeed, virtually the whole parsha is devoted to the role Moshe did not occupy, – that of Priest in general, High Priest in particular.

The question is, why is Moshe removed from the passage entirely? The commentators offered various suggestions. One given in the Talmud refers to an event at the beginning of Moshe’ leadership: his encounter with God at the burning bush. Moshe repeatedly expressed reluctance to undertake the mission of leading the people out of Egypt. Finally, we read: But Moshe said, “O Lord, please send someone else to do it.” Then the Lord’s anger burned against Moshe and He said, “What about your brother, Aharon the Levite? I know he can speak well. He is already on his way to meet you, and his heart will be glad when he sees you. You shall speak to him and put words in his mouth; I will help both of you speak and will teach you what to do.” (Exodus 4:13-15)

There is a debate in the Talmud about the lasting impact of that moment when Moshe, as it were, refused one time too many. To turn down the challenge of leadership once or twice is a sign of humility. To continue to do so, especially when it is God issuing the challenge, may bring about God’s anger, as happened here. According to Rabbi Shimon bar Yochai in the Talmud, the lasting effect of Moshe’ reluctance to lead was that one vital leadership role – priesthood – was eventually granted to Aharon rather than to Moshe himself. Rabbi Jacob ben Asher (1270-1340) suggests that Moshe’ name is missing from Tetzaveh, which deals with the priestly garments, “to spare him distress” upon seeing Aharon acquire the uniform of priesthood that might have been Moshe’s own.

1. Do you think Moshe’ name was removed from this parsha for his benefit, or for Aharon’s benefit?

2. Who do you think is more likely to be jealous of his brother, Aharon or Moshe?

3. Do you have siblings? Are you sometimes jealous of them or they of you? Why do you think this is?

The day the Nazis liquidated the ghetto of Piotrków, the Rabbi of the Polish town, Reb Moshe Chaim Lau, grabbed his eldest son Tulek, looked him in the eye with burning passion and love, and said, “You are the eldest of the children. It is your responsibility to ensure they continue to follow in our ways.” Tulek knew exactly what he meant. “Take special care of Lulek,” his father implored. Tulek believed his father had deep faith that Lulek, the youngest of the family, then aged just 7, would somehow survive and continue the legacy of the family. Finally he added, “If you come safely through this hell, you will know how to find your home. Not here, not on any alien hostile soil. Your home is Eretz Yisrael.” This mission gave Tulek an amazing drive to survive. His father’s words gave him extraordinary strength beyond what could possibly have been expected, himself just a boy aged 16.

As the Nazis forced the men and women into two separate lines, Lulek held on to his mother tightly. But she understood that he had a greater chance of survival if he was with the men, so she pushed him away from her into the arms of Tulek. Tulek emptied the bag he had with him, wrapped Lulek in a blanket, and placed him in the bag. Their parents were sent directly to Treblinka and perished on that day. Tulek was sent to Buchenwald with Lulek hidden on his back.

Time and time again Tulek gambled his life to save his younger brother, all the while fighting to survive himself. In the Czestochowa labour camp he bribed a German officer with a diamond hidden in his teeth to buy Lulek’s life, and again in Buchenwald with his father’s gold watch, hidden in his shoe. This was the last of his resources and after this he had to rely on his wits alone.

As the Allied forces closed in, the Jewish inmates were deported on a train, but Lulek, in hiding, remained in the camp. Tulek managed to jump from the train with two other survivors. “Where do we head now” they ask. “Back to Buchenwald,” Tulek answered, “I have to go back for the child!”

On 11th April 1945, Buchenwald was liberated by American troops. Against all odds, and against all reason, the two brothers had survived, and after travelling through Europe, they found their way on to a Jewish Agency “illegal immigrant” ship headed for Palestine. They arrived in pre-state Israel in July 1945, less than three years after Tulek had taken his oath to their father, the Rabbi of Piotrkow.

This story has a postscript. Almost fifty years later, the two brothers stood side by side at the Kotel. The elder brother, Naftali Lau-Lavie, himself a dedicated public servant of many years, beamed with pride as his little brother, Rabbi Yisrael Meir Lau, was inaugurated as the beloved Chief Rabbi of the State of Israel.

1. Are there any similarities between these two brothers and the brothers in our parsha (Moshe and Aharon)?

2. Do you think the love between these siblings is normal, or something beyond the usual?

One of the recurring themes of Genesis is sibling rivalry, hostility between brothers. This story is told four times: between Cain and Abel, Isaac and Ishmael, Jacob and Esau, and Joseph and his brothers.

There is a noticeable pattern to this set of narratives, best seen in the way each story ends. The tale of Cain and Abel ends with murder – fratricide (killing a sibling). Isaac and Ishmael, though they grow up apart, are together at Abraham’s funeral. Evidently there has been a reconciliation between them. Jacob and Esau meet, embrace and go their separate ways. Joseph and his brothers are reconciled and live together in peace, Joseph providing them with food, land, and protection.

Genesis is telling us a story of great consequence. Fraternity – one of the key words of the French revolution – is not simple or straightforward. It is often fraught with conflict and contention. Yet slowly, brothers can learn that there is another way. On this note Genesis ends. But it is not the end of the story.

The drama has a fifth act: the relationship between Moshe and Aharon. Here, for the first time, there is no hint of sibling rivalry. The brothers work together from the very outset of their mission to lead the Israelites to freedom. They address the people together. They stand united when confronting Pharaoh. They perform signs and wonders together. They share leadership of the people in the wilderness. At last, we see two brothers functioning as a team, with different gifts, different talents, different roles, but without hostility, each complementing the other.

Their partnership is a constant feature of the narrative. But there are certain moments where it is particularly noteworthy. The first occurs in the passage already cited above. God tells Moshe that Aharon “is already on his way to meet you, and his heart will be glad when he sees you.” How different this is from the tense encounters between brothers in Genesis!

Aharon, we may have thought, might have many reasons not to rejoice on seeing Moshe return. The brothers had not grown up together. Moshe had been adopted by Pharaoh’s daughter and raised in an Egyptian palace, while Aharon remained with the Israelites. Nor had they been together during the Israelites’ sufferings. Moshe, fearing for his life after his assault on an Egyptian taskmaster, had fled to Midian.

Besides this, Moshe was Aharon’s younger brother, and yet it was he who was about to become the leader of the people. Always in the past, when the younger had taken something the elder might have believed belonged naturally to him, there was jealousy, animosity. Yet God assures Moshe: “when Aharon sees you, he will rejoice.”

The second fascinating clue is contained in a strange passage that traces the descent of Moshe and Aharon: “Amram married his father’s sister Yocheved, who bore him Aharon and Moshe… It was this same Aharon and Moshe to whom the Lord said, “Bring the Israelites out of Egypt by their divisions.” They were the ones who spoke to Pharaoh king of Egypt about bringing the Israelites out of Egypt. It was this same Moshe and Aharon. (Exodus 6:20, 26-27). Why the repeated phrase, “It was this same”? There are two other peculiarities in the phrases. The first is that the names of the brothers are placed in a different order: the first says “Aharon and Moshe,” the second, “Moshe and Aharon.” Even stranger is the grammatical oddity of the phrase. Both times, the third person singular is used, literally translating to: “He was Aharon and Moshe”, “He was Moshe and Aharon.” The text should have said, “They” – all the more so since the pronoun “they” is used in the middle of the passage: “They were the ones who spoke to Pharaoh.” The unmistakable implication is that they were like a single individual; they were as one. There was no hierarchy between them: sometimes Aharon appears first, sometimes Moshe.

It was precisely the fact that Aharon did not envy his younger brother but instead rejoiced in his greatness that made him worthy to be High Priest. So it came to pass – measure for measure – that just as Aharon made space for his younger brother to lead, so the Torah makes space for Aharon to lead. That is why Aharon is the hero of Tetzaveh: for once, not overshadowed by Moshe.

Judaism, Christianity and Islam have been locked in a violent, sometimes fatal embrace for so long. Their relationship is sibling rivalry, fraught with mimetic desire: the desire for the same thing, Abraham’s promise.
…At the heart of all three faiths is the idea that within humanity there is one privileged position – one favoured son, a chosen people, guardian of the truth, gatekeeper of salvation – for which more than one candidate competes. The result is conflict of the most existential kind, for what is at stake is the most precious gift of all: God’s paternal love. One group’s victory means another’s defeat, and since this is a humiliation, a dethronement, it leads to revenge. So the strife is perpetuated.

1. Do you think we can learn from the sibling rivalries in the Torah to help us understand the world?

2. Do you think God has favourites? Is it possible God loves all nations and people equally?