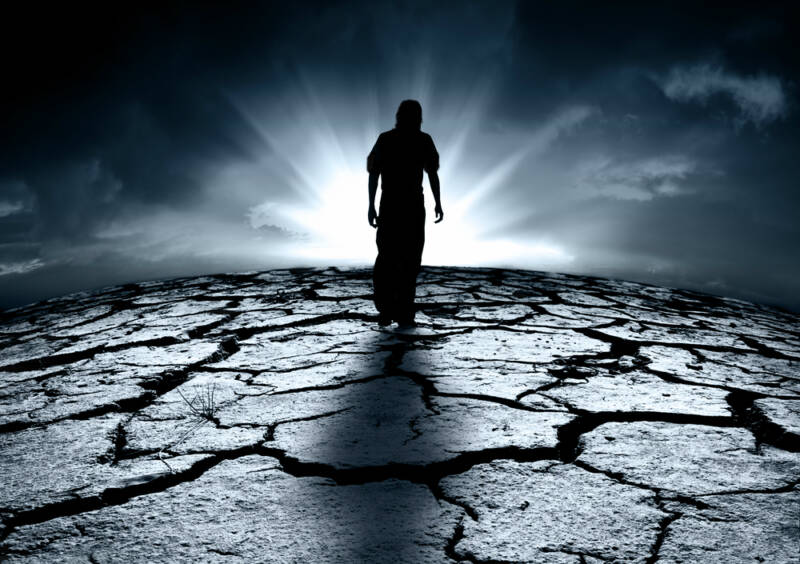 With Vayechi, the book of Genesis, full of conflicts within the family, comes to a peaceful end. Jacob, reunited with his beloved Yosef, sees his grandsons, the only such scene in the Torah. He blesses them. Then, on his death-bed, he blesses his twelve sons. He dies and is buried in the cave of Machpelah with his parents and grandparents. Yosef forgives his brothers a second time, and he himself dies, having assured his brothers that God will eventually bring the family back to the Promised Land. The long patriarchal narrative is at an end and a new period – the birth of Israel as a nation – is about to begin.

The brothers fear for their lives as Yosef reveals himself to them. What would stop him from taking his revenge? Yosef reassures them with these words: “Don’t be afraid,” said Yosef. “Am I in place of God? You intended to harm me but God intended it for good, to accomplish what is now being done, the saving of many lives.” (Bereishit 50:19-20) The conclusion to this story is the original source for understanding the concept of teshuva (repentance).

Reish Lakish’s statement about sins and merits is almost certainly inspired by the words Yosef speaks to his brothers in the closing chapter of Genesis: “You intended to harm me but God intended it for good.” This is the paradigm that stands at the basis of Reish Lakish’s argument. The brothers had committed a deliberate sin by selling Yosef into slavery; they (or at least Yehuda, the instigator of the decision to sell Yosef) had done teshuva. The result is that – through divine providence (“God intended it”) – their action is now reckoned “for good.” Any act we perform has multiple consequences, some good, some bad. When we intend evil, the bad consequences are attributed to us because they are what we sought to achieve. The good consequences are not: they are mere by-products or unintended outcomes.

So in the case of Yosef, many positive things happened once he had been brought to Egypt. None of these consequences could be credited to his brothers, even though they would not have happened had the brothers not done as they did. However, once the brothers had undergone complete repentance, their original intent was cancelled out. It was now possible to see the good, as well as the bad, consequences of their act – and to credit the good to them.

1. Do you think that the motivation behind an act is most important, or the outcome of the act?

2. Can you think of bad things that have happened to you that have ultimately also had good outcomes?

3. What heroic traits is Yosef modelling for us in this story?

When one sees Reish Lakish studying Torah in the study hall it is as though he is uprooting mountains and grinding them into each other. (Talmud Bavli, Sanhedrin 24a)

When Rabbi Imi was kidnapped in Sifsufa, Rabbi Yochanan despaired and proclaimed him as good as dead. Reish Lakish replied to him before we abandon hope that he has been killed I am willing to run the risk that I may be killed in order to save him. He went and rescued him from the hands of the kidnappers, who all were eventually killed themselves. On another occasion Rabbi Yochanan was robbed in Ale-kaniah. When Reish Lakish noticed something was wrong he admitted that he had been robbed. Reish Lakish told him to show him where, and he went and found the robbers and took back all of Rabbi Yochanan’s belongings. (Talmud Yerushalmi, Teruma, 46b)

1. How does Reish Lakish show in his own life that teshuva can redeem previous actions, making them a source of future good?

2. What skills and resources do you have that could be used for bad or for good?

The idea explored in The Core Idea, that through repentance, deliberate sins can be accounted as merits, is a hugely significant idea, for it means that by a change of heart we can redeem the past. However, this still sounds impossible, for we tend to take for granted the idea of the asymmetry of time: The future is open, but the past is closed. Before us lie a series of paths. Which we take depends upon our choice. Behind us lies the history of our previous decisions, none of which we can undo. We cannot go back in time. That is a logical impossibility. We can affect what is yet to be; but, in the words of the Sages, “What has been, has been,” and we cannot alter it. With or without repentance, the past is surely immutable. All of this is true, but it is not the whole truth. The revolutionary idea behind Yosef’s and Reish Lakish’s words is that there are two concepts of the past. The first is what happened. The second is the significance, the meaning, of what happened.

In ancient Israel a new concept of time was born. This did more than change the history of the West; in a sense, it created it. Until Tanach, time was generally conceived as a series of eternal recurrences, endlessly repeating a pattern that belonged to the immutable structure of the universe. The seasons – spring, summer, autumn, winter – and the lifecycle – birth, growth, decline and death – were a reiterated sequence in which nothing fundamentally changed. This is variously called cyclical, or cosmological, or mythic time.

This conception of time produces a deeply conservative philosophy of life. It justifies the status quo. Inequalities are seen as written into the structure of the universe. All attempts to change society are destined to fail. People are what they are, and the world is what it has always been. At best this view leads to resignation, at worst to despair. There is no ultimate meaning in history.

The Jewish understanding of time that emerges from Tanach, in contrast, was utterly revolutionary. For the first time people began to conceive that God had created the universe in freedom, and that by making man in His image, He endowed him too with freedom. That being so, he might be different tomorrow from what he was today, and if he could change himself, he could begin to change the world. Time became an arena of change. With this, the concept of history (as opposed to myth) was born.

We live life forwards, but we understand it backwards. The simplest example of this is autobiography. Reading the story of a life, we understand how early experiences shape who we become. What we become depends on our choices, and we are (almost) always free to choose this way or that. But what we become shapes the story of our life, and only in hindsight, looking back, do we see the past in context, as part of a tale whose end we now know. In life considered as a narrative, later events change the significance of earlier ones. It was the gift of Judaism to the world to discover time as a narrative.

That was what Reish Lakish knew from his own experience. He had been a highway robber. He might have stayed one. Instead he became a ba’al teshuva, and the very characteristics he had acquired in his earlier life – physical strength and courage – he later used to virtuous ends (see It Once Happened…). He knew he could not have done so had he had a different past, a life of study and peace. His sins became merits because in retrospect they were an essential part of the good he eventually did. What had happened (the past as past) did not change, but its significance (the past as part of a narrative of transformation) did.

That too was the profound philosophical-spiritual truth Yosef conveyed to his brothers. By your repentance – he intimated to them – you have changed the story of which you are a part. The harm you intended to do ultimately brought about good. So long as you stayed the people prepared to sell a brother into slavery, none of that good could be attributed to you, but now you have transformed yourself through teshuva, and so have transformed the story of your life as well. By your change of heart you have earned the right to be included in a narrative whose ultimate outcome was benign.

Teshuva sensitizes us to the full significance of time. There are those who live purely in the present, but their lives have no overarching meaning. They react rather than act. They travel with no ultimate destination. They are “like chaff blown by the wind” (Tehilim 1:4). To be a Jew is to live poised between past and future: the past and future of our individual lives, of our ancient but still young people and of humanity as a whole.

Teshuva tells us that our past does not determine our future. We can change. We can act differently next time than last. If anything, our future determines our past. Our determination to grow as human beings – our commitment to a more faithful, sensitive, decent life in the year to come – gives us the courage and honesty to face our past and admit its shortcomings. Our teshuva and God’s forgiveness together mean that we are not prisoners of the past, held captive by it. In Judaism, sin is what we do, not what we are. Therefore we remain intact, able to acknowledge our failures and then move on.

1. How does the concept of Teshuva sensitize us to the significance of time, helping us to live in the moment?

2. Where do we see this message in Parshat VaYechi?