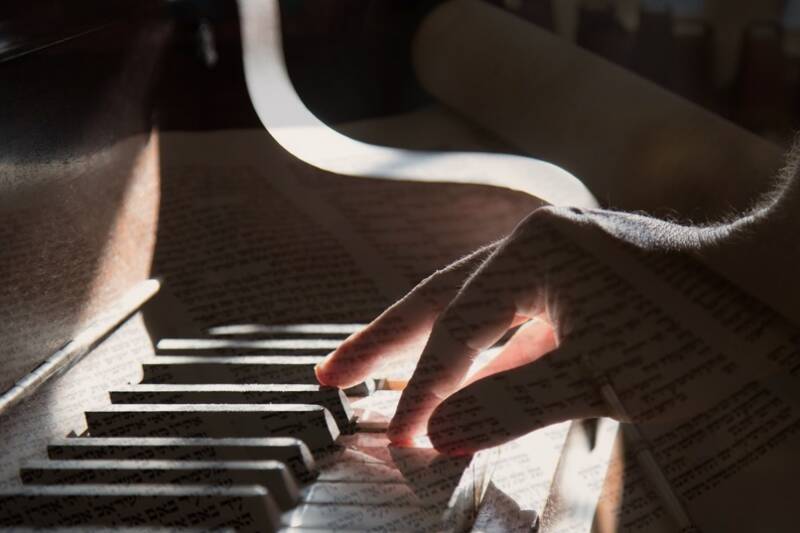 The Torah as God’s Song

Vayelech is the very shortest parsha, only thirty verses long. Moshe tells the people, “I am now a hundred and twenty years old, and I can no longer go forth” (Devarim 31:2). He will not be leading them across the Jordan into the Promised Land. He then summons his successor Joshua and, in the presence of the people, gives him words of encouragement. He instructs the people to gather every seven years to hear a public reading of the Torah.

God appears to Moshe and Joshua, warning them that the Israelites may eventually stray from the covenant. He instructs them to write down the Torah and teach it to the people, as permanent testimony of the covenant itself. He then encourages Joshua, assuring him that He will be with him as he leads the people.

At the end of his life, having already given the Israelites 612 of God’s commands, Moshe gave them the final mitzvah: “Now therefore write down for yourselves this song and teach it to the people of Israel. Put it in their mouths, that this song may be My witness against the people of Israel” (Devarim 31:19).

It may seem like God was speaking to Moshe and Joshua and only referring to the song in the following chapter, “Listen, O heavens, and I will speak; hear, O earth, the words of my mouth” (32:1). However, Oral Tradition gave this verse a different and much wider interpretation, understanding it as a command for every Jew to write, or at least take some part in writing, a Sefer Torah:

Said Rabbah: Even though our ancestors have left us a scroll of the Torah, it is our religious duty to write one for ourselves, as it is said: “Now therefore write down for yourselves this song and teach it to the people of Israel. Put it in their mouths, that this song may be My witness against the people of Israel.” (Sanhedrin 21b)

The logic of the interpretation seems to be, first, that the phrase “write down for yourselves” could be understood as referring to every Israelite (Ibn Ezra), not just Moshe and Joshua. Second, the passage goes on to say (31:24): “Moshe finished writing in the book the words of this law from beginning to end.” The Talmud offers a third reason. The verse goes on to say: “That this song may be My witness”, implying the Torah as a whole, not just the song in chapter 32 (Nedarim 38a).

Thus understood, Moshe’ final message to the Israelites was: “It is not enough that you have received the Torah from me. You must make it new again in every generation.” The covenant was not to grow old. It had to be frequently renewed.

So it is to this day that Torah scrolls are still written as in ancient times, by hand, on parchment, using a quill – as were the Dead Sea Scrolls two thousand years ago. In a religion that focuses on holy words, and that is almost without holy objects, the Torah scroll is the nearest Judaism comes to a physical object that has sanctity.

Judaism is the story of the love between a people and a book, the Book of books.

1. What are the two possible interpretations of the verse Devarim 31:19?

2. Why do you think there is a mitzvah for every person to be involved in the writing of a Sefer Torah?

3. How can we ‘make the Torah new’ in every generation?

Joachim Joseph celebrated his bar mitzvah in the most unlikely of places. He was in Bergen-Belsen concentration camp in 1944, and had been taught in secret, late at night. The only family member with him was a younger brother. He read from a tiny Sefer Torah that his teacher, Rabbi Dasberg, had kept hidden throughout the war. It was barely four inches in height. Afterwards, everyone congratulated Joseph, and some even gave him gifts. He received a small piece of chocolate, a tiny pack of playing cards, and a very special gift that would remain with him until he was an old man. The Rabbi gave him the tiny Sefer Torah, on condition that if he survived, he must tell the story of his bar mitzvah. A few months later the Rabbi died, but Joseph escaped.

After the war he made his way to Israel and saw the birth of the Jewish State. He later became a professor of physics, and was part of the team that sent Israel’s first astronaut, Ilan Ramon, into space. When he told Ilan the story of the tiny Sefer Torah, Ilan was inspired to take it with him aboard the space shuttle, Columbia. In a live telecast from aboard the space shuttle, Ilan held up the Sefer Torah and told its story to millions of people. “This was given by a Rabbi to a scared, thin young boy in Bergen-Belsen,”said Ilan from the space shuttle… “It represents more than anything the ability of the Jewish people to survive. From horrible periods, black days, to reaching periods of hope and belief in the future.”

Joseph knew then that he had kept his promise to the Rabbi.

1. Why was the Sefer Torah so important to Joseph? What did it represent to him?

2. Why do you think Ilan Ramon chose to take it to space with him?

If we take this command to refer to the whole Torah and not just one chapter, what is the significance of the word “song” (shira): “Now therefore write down for yourselves this song”? The word shira appears five times in this passage. It is clearly a key word. Why? On this, two nineteenth-century scholars offered striking explanations.

The Netziv (Rabbi Naftali Zvi Yehuda Berlin, 1816–1893, one of the great yeshiva heads of the nineteenth century) interprets it to mean that the whole Torah should be read as poetry, not prose; the word shira in Hebrew means both a song and a poem.

To be sure, most of the Torah is written in prose, but the Netziv argued that it has two characteristics of poetry. First, it is allusive rather than explicit. It leaves unsaid more than is said. Secondly, like poetry, it hints at deeper reservoirs of meaning, sometimes by the use of an unusual word or sentence construction. Descriptive prose carries its meaning on the surface. The Torah, like poetry, does not.

In this brilliant insight, the Netziv anticipates one of the great twentieth-century essays on biblical prose, Erich Auerbach’s “Odysseus’ Scar.” Auerbach points out that biblical narrative is spare and understated, not at all like a work of fiction. For example, explains Auerbach, in the story of the binding of Isaac we do not know any of the usual narrative details: what the main characters look like, what they are feeling, what they are wearing, what landscapes they are passing through.

The decisive points of the plot alone are emphasised, what lies between is non-existent; time and place are undefined and call for interpretation; thoughts and feelings remain unexpressed, only suggested by the silence and the fragmentary speeches; the whole, permeated with the most unrelieved suspense and directed towards a single goal, remains mysterious and “fraught with background.”

A completely different aspect is alluded to by Rabbi Yechiel Michel Epstein, author of the halachic code Aruch HaShulchan. Epstein points out that the rabbinic literature is full of arguments, about which the Sages said: “These and those are the words of the living God.” This, says Epstein, is one of the reasons the Torah is called “a song” – because a song becomes more beautiful when scored for many voices interwoven in complex harmonies.

Judaism is a religion of words, and yet whenever the language of Judaism aspires to the spiritual it breaks into song, as if the words themselves sought escape from the gravitational pull of finite meanings. There is something about melody that intimates a reality beyond our grasp, what William Wordsworth called the “sense sublime. Of something far more deeply interfused. Whose dwelling is the light of setting suns. And the round ocean and the living air.”

The 613th command, to make the Torah new in every generation, symbolises the fact that though the Torah was given once, it must be received many times, as each of us, through our study and practice, strives to recapture the pristine voice heard at Mount Sinai. That requires emotion, not just intellect. It means treating Torah not just as words read, but also as a melody sung. The Torah is God’s libretto, and we, the Jewish people, are His choir, the performers of His choral symphony. And though when Jews speak they often argue, when they sing, they sing in harmony, as the Israelites did at the Red Sea, because music is the language of the soul, and at the level of the soul Jews enter the unity of the Divine which transcends the oppositions of lower worlds.

The Torah is God’s song, and we collectively are its singers.

The story of the Jewish people, especially after the second Temple, is about one of the great love affairs of all time, the love of a people for a book, the Torah. Much of the rabbinic literature, especially the tractate Avot, Ethics of the Fathers, reads like an extended poem in praise of Torah and the life of learning. The Torah was, said the Rabbis, the architecture of creation, written in letters of black fire on white fire. It was, said a later mystical tradition, nothing less than a single extended name of God. For Rabbi Akiva it was the very air Jews breathed. It was life itself…

The result was a constant dialogue with revelation. In Talmud study Jews found themselves entering into a conversation not only with the Torah but with successive generations of its commentators, Hillel and Shammai, Rav and Shmuel, Abaya and Rava, Rashi and the Tosafists, Rambam and Ramban. On virtually every subject they had access to a millennial heritage of wisdom. Landless and powerless, they inhabited a mental universe whose horizons in space and time were vast. And as each community, each age, added its chiddushim, its new insights into the ancient text, they could feel some of the excitement of Sinai. Judaism is not a religion of continuing revelation, but rather one of continuing interpretation.

1. How does the Jews’ love of the Torah manifest itself (i.e. where can we practically see it)?

2. How can you be a link in the chain of “writing the Torah” and renewing it in our generation?