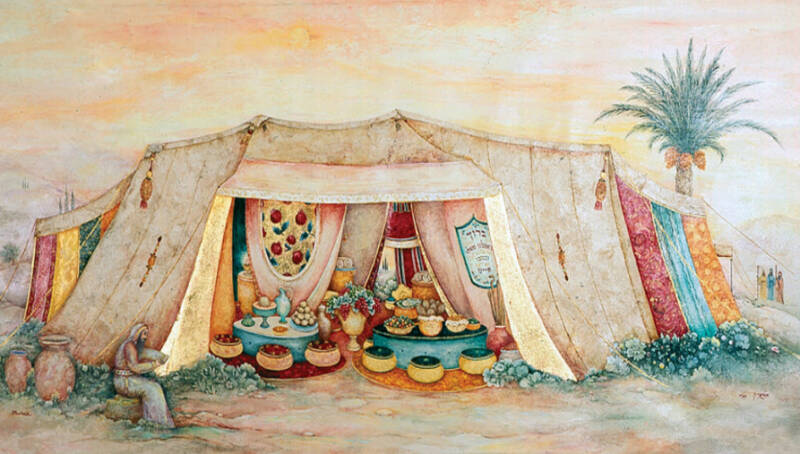 God appears to Avraham. Three strangers pass by. Avraham offers them hospitality. One of them tells Avraham that Sarah will have a child. Sarah, overhearing, laughs in disbelief.

God then tells Avraham of His plan to punish the people of Sodom. Avraham enters into an unprecedented discussion with God about justice, demanding He take into account any possible innocent people in Sodom. God agrees that if there are ten innocent men in the city He will spare it.

Two of the visitors, by now identified as angels, go to Avraham’s nephew, Lot, in Sodom and rescue him, his wife and their daughters from the destruction. Eventually, the promised child, Isaac, is born to Sarah. The parsha ends with the great test of the Akeidah, the “binding of Isaac.”

Our parsha begins with a somewhat confusing opening scene, with Avraham sitting at the entrance to his tent:

God appeared to Avraham by the oaks of Mamre, as he sat at the entrance to his tent in the heat of the day. He lifted up his eyes and looked, and, lo, three men were standing over against him; and when he saw them, he ran to meet them from the tent entrance, and bowed down to the earth…(Gen. 18:1-2)

At first glance the story seems simple. However, after a closer look it is actually complex and ambiguous. It consists of three sections:

The relationship between these sections is far from clear. Is this one scene, two or three?

The most obvious possibility is three. Each of the sections is a separate event. First, God appears to Avraham, as Rashi explains, “to visit the sick” after Avraham’s circumcision (brit milah). Then the visitors arrive with the news that Sarah will have a child. Then the great conversation between Avraham and God about justice and the punishment of the people of Sodom.

The Rambam suggests that there are only two scenes: The visit of the angels, and the dialogue with God. The first verse does not describe an event at all; it is, rather, a chapter heading. It tells us that the events that follow are all part of a prophetic communication from God, a divine-human encounter.

The third possibility is that we have a single continuous scene. God appears to Avraham, but before He can speak, Avraham sees the passers-by and asks God to wait while he serves them food. Only when they have departed – in verse 17 – does he turn to God, and the conversation begins.

1.   Which of these three interpretations do you think best explains the story? Why do you prefer that interpretation to the others?

2.   Consider the third interpretation. What do you think of Avraham’s decision to interrupt his conversation with God? Was this justified? Can that behaviour ever be justified?

3.   What do you think is the message behind the third interpretation?

Ari Fuld deserved his nickname the “Lion of Zion”. He was a brave and passionate Zionist and dedicated his life to the Jewish People and to the Jewish State. Ari served in the Israel Defence Forces (IDF) as a sergeant in an elite paratroopers’ unit, and felt it was a privilege to serve in the IDF. When he turned 40, his discharge papers arrived but he tore them up and refused to retire. In his civilian life he continued his life’s work to advocate for Israel in the media and on social media, and support IDF troops through the organisation he helped create and run called Standing Together.

Ari was killed one Sunday morning in a knife attack while doing his supermarket shopping in September 2018. After fatally stabbing Ari, the terrorist continued his attack, running toward a woman serving falafel in a nearby shop. With a superhuman effort, with his very last breaths, Ari jumped over a wall and chased the terrorist, shooting him before he could kill again. Ari then collapsed and died from his wounds. He died as he lived. A hero dedicated to the Jewish people.

Ari’s true heroism and character became well-known following his death as stories from his life began to surface. A particularly poignant one came from a local Arab who reached out to Ari’s family to offer his condolences. He told them that every Friday when Ari would shop for his own family for Shabbat, he would also buy some extra food to give to his family who were poor and often hungry. While Ari dedicated his life to his own people, he had compassion and love for the stranger also.

1.   What do you find most inspiring from this story?

2.   Is it hard to show kindness to the stranger? Why is it important?

In “The Core Idea” we saw three possible interpretations of the story of the angels visiting Avraham. These options hinge upon the way we translate the word Adonai in Avraham’s appeal: “Please Adonai, if now I have found favour in your sight, do not pass by, I pray you, from your servant” (18:3). Adonai can be a reference to one of the names of God. But it can also be read as “my lords” or “sirs.” In the first case, Avraham would be addressing God. In the second, he would be speaking to the passers-by. In fact, an example of the second way to read the term Adonai, as “my lords” can be seen in the very next chapter (Gen. 19:1-2), when Lot receives two of the same angels in Sodom. The simplest reading of both stories would be to read the word consistently as “sirs” and many English translations do just that. Jewish tradition, however, does not.

We know this because there are halachic implications in this case of how we read this word. If we read Adonai as “God,” it is a holy name, and both the writing of the word by a scribe, and the way we treat a parchment or document containing it, have special stringencies in Jewish law. And that is how Jewish law rules in this case.

This is an extraordinary fact, because it suggests that Avraham actually interrupted God as He was about to speak, asking Him to wait while he attended to the visitors. The story must now be read like this: God appeared to Avraham, and then he also noticed three men approaching. Avraham then turned to God and said “My God, if I have found favour in Your eyes, do not leave Your servant [i.e. Please wait until I have given hospitality to these men].” Then Avraham turned back to the men and offered his hospitality.

This daring interpretation became the basis for a principle in Judaism: “Greater is hospitality than receiving the Divine Presence” (Talmud Bavli, Shabbat 127a). Faced with a choice between listening to God, and offering hospitality to strangers, Avraham chose the latter. God accepted his request and waited while Avraham brought the visitors food and drink, before engaging him in dialogue about the fate of Sodom.

How could Avraham put the needs of [who he thought to be] human beings before God? This passage is teaching us a profound truth. The idolaters of Avraham’s time worshipped the sun, the stars, and the forces of nature as gods. They worshipped power and the powerful. Avraham knew, however, that God is not in nature but beyond

nature. There is only one thing in the universe on which He has set His image: the human person, every person, powerful and powerless alike.

Avraham, father of monotheism, knew the paradoxical truth that to live the life of faith is to see the trace of God in the face of the stranger. It is easy to receive the Divine Presence when God appears as God. What is difficult is to sense the Divine Presence when it comes disguised as three anonymous passers-by. That was Avraham’s greatness. He knew that serving God and offering hospitality to strangers were not two things but one.

By choosing the most radical of the three possible interpretations of Genesis 18, the Sages allowed us to hear one of the most fundamental principles of the life of faith: We honour God by honouring His image, humankind.

Tzedakah is the gift of money or its equivalent. But sometimes that is not what we most need. We can suffer emotional as well as physical poverty. We can be depressed, lonely, close to despair. We may need company or comfort, encouragement or support. These too are human needs, no less real for being untranslatable into the language of politics or economics.

That is what chessed is about: emotional support, loving-kindness, love as compassion. It is what we mean when we speak of God in Psalm 147 as one who ‘heals the broken-hearted and binds up their wounds’. It includes hospitality to the lonely, visiting the sick, comforting the bereaved, raising the spirits of the depressed, helping people through crises in their lives, and making those at the margins feel part of the community. It is tzedakah’s other side.

Tzedakah is done with material goods, chessed with psychological ones: time and care. Tzedakah is practical support, chessed is emotional support. Tzedakah is a gift of resources, chessed a gift of the person. Even those who lack the means to give tzedakah can still give chessed. Tzedakah rights wrongs; chessed humanises fate.

Avraham and Sarah were chosen because of their chessed to others. Ruth became the ancestress of Israel’s kings because of her chessed to Naomi. At the heart of the Judaic vision is the dream of a society based on chessed: society with a human face, not one dominated by the competition for wealth or power. Chessed is the mark of a people joined by covenant. Covenant creates society as extended family; it means seeing strangers as if they were our long-lost brothers or sisters. A community based on chessed is a place of grace, where everyone feels honoured and everyone is at home.

1.   What is the difference between tzedakah and chessed?

2.   Avraham was known as a man of chessed. How do you think this impacts on his descendants?