Of Love and Hate 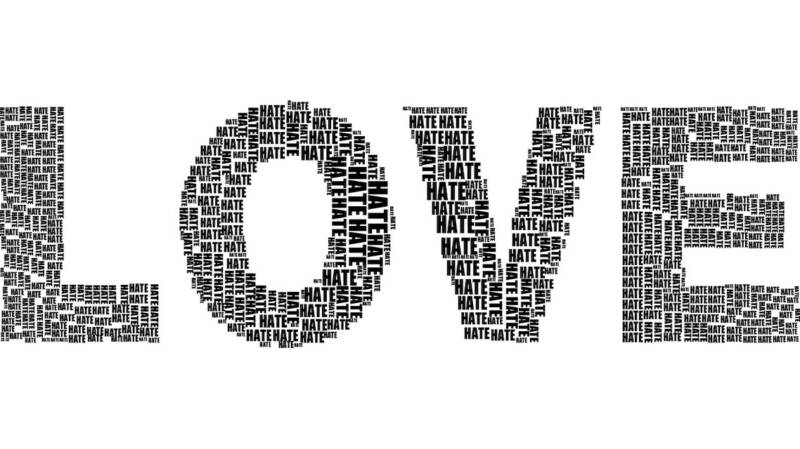 At the centre of the mosaic books is Vayikra. At the centre of Vayikra is the “holiness code” (chapter 19) with its momentous call: “You shall be holy because I, the Lord your God, am holy.” And at the centre of chapter 19 is a brief paragraph which, by its positioning, is the apex, the high point, of the Torah:

Do not hate your brother in your heart.
You must surely admonish your neighbour and not bear sin because of him.
Do not take revenge or bear a grudge against the children of your people.
Love your neighbour as yourself. I am God.

I want, in this study, to examine the second of these provisions: “You must surely admonish your neighbour and not bear sin because of him.”

Rambam and Ramban agree in seeing two quite different levels of meaning in this sentence. This is how Rambam puts it:

When one person sins against another, the latter should not hate him and remain silent. As it is said about the wicked: “And Absalom spoke to Amnon neither good nor evil, although Absalom hated Amnon.” Rather, he is commanded to speak to him and to say to him, “Why did you do such-and-such to me? Why did you sin against me in such-and-such a matter?” As it is said, “You must surely admonish your neighbour.” If he repents and requests forgiveness from him, he must forgive and not be cruel, as it is said, “And Abraham prayed to God . . .”

If someone sees his fellow committing a sin or embarking on a path that is not good, it is a commandment to make him return to the good and to make known to him that he is sinning against himself by his evil actions, as it is said, “You must surely admonish your neighbour…”

However, it seems to me that the correct interpretation is that the expression “you shall surely remonstrate” is to be understood in the same way as “And Abraham remonstrated with Avimelech”. The verse is thus saying: “Do not hate your brother in your heart when he does something to you against your will, but instead you should remonstrate with him, saying, ‘Why did you do this to me?’ and you will not bear sin because of him by covering up your hatred in your heart and not telling him, for when you remonstrate with him, he will justify himself before you or he will regret his action and admit his sin, and you will forgive him.”

The difference between the two interpretations is that one is social, the other interpersonal. On Rambam’s second and Ramban’s first reading, the command is about collective responsibility. When we see a fellow Jew about to commit a sin, we must try to persuade him not to do so. We are not allowed to say, “That is a private matter between him and God.” “All Israel,” said the Sages, “are sureties for one another.” We are each responsible, not only for our own conduct, but for the behaviour of others. That is a major chapter in Jewish law and thought.

However, both Rambam and Ramban are aware that this is not the plain sense of the text. Taken in context, what we have before us is a subtle account of the psychology of interpersonal relations.

Judaism has sometimes been accused by Christianity of being about justice rather than love (“You have heard that it was said, ‘Love your neighbour and hate your enemy.’ But I tell you: Love your enemies and pray for those who persecute you”). This is entirely untrue. There is a wonderful teaching in Avot deRabbi Natan: “Who is the greatest hero? One who turns an enemy into a friend.” What sets the Torah apart is its understanding of the psychology of hatred.

If someone has done us harm, it is natural to feel aggrieved. What then are we to do in order to fulfil the command, “Do not hate your brother in your heart”? The Torah’s answer is: Speak. Converse. Challenge. Remonstrate. It may be that the other person had a good reason for doing what he did. Or it may be that he was acting out of malice, in which case our remonstration will give him, if he so chooses, the opportunity to apologise, and we should then forgive him. In either case, talking it through is the best way of restoring a broken relationship. Once again we encounter here one of the leitmotivs of Judaism: the power of speech to create, sustain and mend relationships.

Maimonides cites a key prooftext. The story is told (2 Samuel 13) of how Amnon, one of King David’s children, raped his half-sister Tamar. When Absalom, Tamar’s brother, hears about the episode, his reaction seems on the face of it irenic, serene:

Her brother Absalom said to her, “Has that Amnon, your brother, been with you? Be quiet, now my sister; he is your brother. Don’t take this thing to heart.” And Tamar lived in her brother Absalom’s house, a desolate woman. When King David heard all this, he was furious. Absalom never said a word to Amnon, either good or bad . . .”

Appearances, however, deceive. Absalom is anything but forgiving. He waits for two years, and then invites Amnon to a festive meal at sheep-shearing time. He gives instructions to his men: “Listen! When Amnon is in high spirits from drinking wine and I say to you, ‘Strike Amnon down,’ then kill him.” And so it happened.

Absalom’s silence was not the silence of forgiveness but of hate – the hate of which Pierre de LaClos spoke in Les Liaisons Dangereuses when he wrote the famous line: “Revenge is a dish best served cold.”

There is another equally powerful example in Bereishit:

Now Israel loved Joseph more than any of his other sons, because he had been born to him in his old age, and he made a richly ornamented robe for him. When his brothers saw that their father loved him more than any of them, they hated him and could not speak a kind word to him (velo yachlu dabro leshalom, literally, “they could not speak with him to peace”).

“Had they been able to sit together as a group, they would have spoken to one another and remonstrated with each other, and would eventually have made their peace with one another. The tragedy of conflict is that it prevents people from talking together and listening to one another.” A failure to communicate is often the prelude to revenge.

The inner logic of the two verses in our sedra is therefore this: “Love your neighbour as yourself. But not all neighbours are loveable. There are those who, out of envy or malice, have done you harm. I do not therefore command you to live as if you were angels, without any of the emotions natural to human beings. I do however forbid you to hate. That is why, when someone does you wrong, you must confront the wrongdoer. You must tell him of your feelings of hurt and distress. It may be that you completely misunderstood his intentions. Or it may be that he genuinely meant to do you harm, but now, faced with the reality of the injury he has done you, he may sincerely repent of what he did. If, however, you fail to talk it through, there is a real possibility that you will bear a grudge and in the fullness of time, come to take revenge – as did Absalom.”

What is so impressive about the Torah is that it both articulates the highest of high ideals, and at the same time speaks to us as human beings. If we were angels it would be easy to love one another. But we are not. An ethic that commands us to love our enemies, without any hint as to how we are to achieve this, is simply unliveable. Instead, the Torah sets out a realistic programme. By being honest with one another, talking things through, we may be able to achieve reconciliation – not always, to be sure, but often. How much distress and even bloodshed might be spared if humanity heeded this simple command.