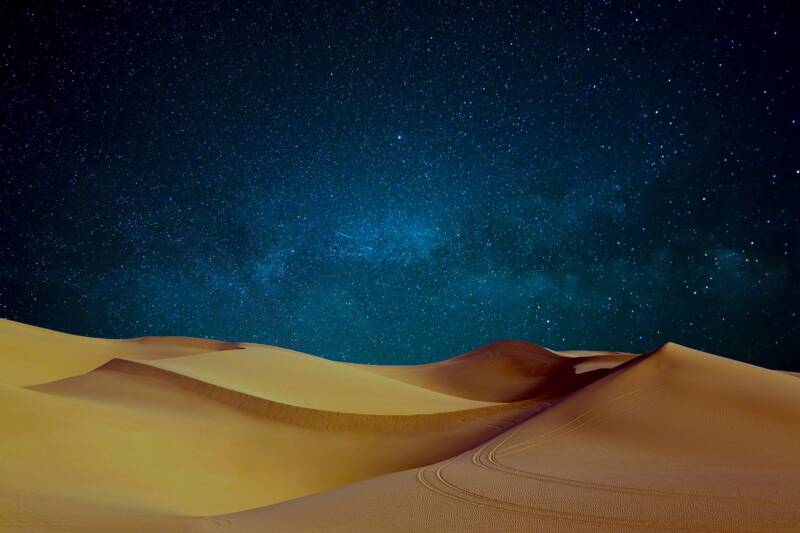 The sedra of Bamidbar – “In the wilderness” – it is usually (though not this year) read directly before the festival of Shavuot, “the time of the giving of the Torah”, when we recall the revelation at Mount Sinai. Indeed the opening verse refers to Sinai: “And the Lord spoke to Moses in the wilderness of Sinai . . .” What is the connection between wilderness and revelation?

The Midrash makes a psychological spiritual point: Anyone who does not make himself open to all [hefker, literally ownerless] like a wilderness cannot acquire wisdom and Torah. (Bamidbar Rabbah 1:7) The desert is neither public nor private space. It belongs to no one. It is completely exposed to the sun and the elements. So must we be – imply the Sages-if we are to become the recipients of Torah. To hear its commanding voice we must listen with total openness, absolute humility. Torah speaks to the soul that has learnt the art of silence.

The Egyptian-French poet Edmond Jabès (1912-1991) noted the connection between d-b-r, ‘word’, and m-d-b-r, ‘wilderness’. For him, the wilderness experience is an essential and continuing feature of what it is to be a Jew:

With exemplary regularity the Jew chooses to set out for the desert, to go toward a renewed word that has become his origin . . . A wandering word is the word of God. It has for its echo the word of a wandering people.

No oasis for it, no shadow, no peace. Only the immense, thirsty desert, only the book of this thirst . . .

For Jabès, the Desert – with its unearthly silence and emptiness-is the condition in which the Word can be heard. There, between sand and sky, the unmediated encounter takes place between God and His people. There is something stark and austere about the wilderness, as there is about Judaism. In no other religion do God and humanity stand in such direct closeness, engaging in such frank and direct dialogue. Judaism is faith stripped of all accretions of myth – a faith that could only reach its full expression far from the diversions and distractions of urban or rural culture, in a landscape of lonely figures confronting the immensity of nature and hearing the Word from above and beyond. We are, Jabès implies, a desert people, never fully at home, never altogether satisfied, always thirsting for something that eludes us, never feeling that we have yet reached our destination. Judaism is the-word-as-wilderness and the-wilderness-as-word.

For the prophets, the desert signalled something else – privacy, intimacy, a place where Lover and beloved go to be alone with one another. Jeremiah delivers one of the most beautiful lines in the entire prophetic literature. In striking contrast to the impression we receive elsewhere in Tanach, that the Israelites in the wilderness were quarrelsome and rebellious, Jeremiah speaks of the love and trust of the people, willing to leave all they knew and follow the divine call:

I remember the devotion of your youth, Your love as a bride – How you followed Me in the wilderness, In a land not sown.

In an earlier age, Hosea used the wilderness as a symbol of the betrothal between God and the Israelites. God had ‘married’ the people, but they had acted unfaithfully. God would punish them. They would suffer disasters. Yet He could not abandon them, so great was His love. So, in an act of reconciliation, He would bring them back and renew their marriage vows in the wilderness, understood as a kind of second honeymoon:

Therefore I am now going to allure her; I will lead her into the wilderness and speak tenderly to her. There I will give her back her vineyards, and will make the Valley of Achor a door of hope. There she will sing as in the days of her youth, as in the day she came up out of Egypt.

But there is a further, immensely significant dimension to the fact that the Torah was given in the wilderness. Israel, alone among the nations of world history, received its constitution even before it had entered its land. There is no analogy to this anywhere else. For every other nation, the land long preceded the laws. A people live in a certain territory. Gradually they begin to associate in ever larger groupings. They fight wars, build settlements, adopt leaders, develop a political structure, and then create a body of legislation to regulate their affairs. Nations develop organically like plants, with their roots in a soil, a landscape. In the history of Israel, and nowhere else, the nation received its laws in the wilderness, before it had even seen, let alone settled, the land. This is one of the great paradoxes of Judaism.

On the one hand, the Jewish story is about the land of Israel. It begins with Abraham’s journey toward it. It continues with a second journey in the days of Moses, with the family now become a people. Judaism is a religion of place: the holy land, the physical location in which the people of the covenant are summoned to create a sacred society based on justice and compassion, human dignity and freedom. It was to be stand in the greatest possible contrast to the great empires with which it was surrounded – nations predicated on demographic strength and military power, tyrannical regimes and hierarchical societies with absolute rulers and populations measured in the mass, not the worth of the individual. Judaism has a home, a place where it belongs.

Yet most of Jewish history was spent outside that home. Abraham was forced, by famine, into exile. So was Jacob. Genesis ends with the patriarchal family in Egypt. Deuteronomy ends with Moses in sight of the promised land but not destined to enter it. Jewish history is a story of exiles – to Assyria, then Babylon, then the long series of dispersions from the Roman conquest to the birth of the modern State of Israel in 1948. As Isaiah Berlin noted: ‘It was once said by the celebrated Russian revolutionary, Alexander Herzen, writing in the mid-nineteenth century, that the Slavs had no history, only geography. The position of the Jews is the reverse of this. They have enjoyed rather too much history and too little geography’ (The Power of Ideas, p. 143).

This paradox is essential to Judaism and what makes it unique among the world’s faiths. On the one hand, the God of Israel is utterly unlike the gods of the ancient world. He is not confined to this place, that nation: He is everywhere. Yet He is not remote, abstract. He has a home – or, to put it more precisely, He lives among a people that has a home. That is why Judaism is attached to a holy land – but at the same time it remains God’s people even when in exile from the land.

It is thus no accident that the Israelites received their greatest revelation – the moment that forged them into a nation – outside the land, bamidbar, ‘in the wilderness’, the place that is not a place, just as Jacob received his two great revelations (the vision of a ladder stretching from earth to heaven, and the wrestling match with a stranger) in the midst of journeys, in places that were between: neither starting point nor destination.

The giving of the Torah in the wilderness is an essential feature of Jewish history. Had the Israelites received the Torah in the land, it would be indissolubly associated with the land. Exile would mean the end of the covenant. It would make no more sense to keep Torah while in exile than to obey the laws of Russia while living in Spain.

What made the God of Israel different was the fact that He was sovereign of the universe, not a local deity. That is why the Jewish people survived dispersion. Only the God of everywhere can be found and worshipped anywhere.