The Genesis of Love 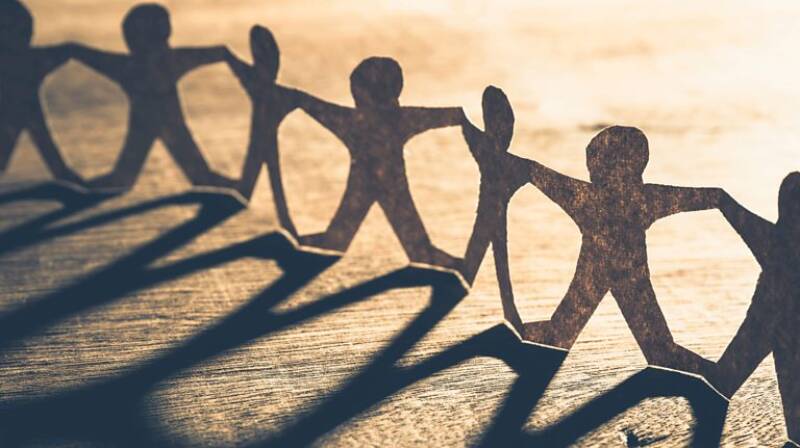 In The Lonely Man of Faith, Rabbi Soloveitchik drew our attention to the fact that  Bereishit contains two separate accounts of creation. The first is in Genesis 1, the second in Genesis 2-3, and they are significantly different.

The explanation, says Rabbi Soloveitchik, is that the Torah is describing two aspects of our humanity that he calls respectively, ‘Majestic man’ and ‘Covenantal man’. We are majestic masters of creation: that is the message of Genesis 1. But we also experience existential loneliness, we seek covenant and connection: that is the message of Genesis 2.

There is, though, another strange duality – a story told in two quite different ways – that has to do not with creation but with human relationships. There are two different accounts of the way the first man gives a name to the first woman. This is the first:

“This time – bone of my bones

and flesh of my flesh;

she shall be called ‘woman’ [ishah]

for she was taken from man [ish].”

And this, many verses later, is the second:

“And the man called his wife Eve [Chavah]

because she was the mother of all life.”

The differences between these two accounts are highly consequential:

[1] In the first, the man names, not a person, but a class, a category. He uses not a name but a noun. The other person is, for him, simply “woman,” a type, not an individual. In the second, he gives his wife a proper name. She has become, for him, a person in her own right.

[3] In the first, it is the woman who is portrayed as dependent: “she was taken from man.” In the second, it is the other way around. Adam, from Adamah, represents mortality: “By the sweat of your brow you will eat your food until you return to the ground (ha-adamah) since from it you were taken.” It is Chavah who redeems man from mortality by bringing new life into the world.

[4] The consequences of the two acts of naming are completely different. After the first comes the sin of eating the forbidden fruit, and the punishment: exile from Eden. After the second, however, we read that God made for the couple, “garments of skin” (“or” is spelled here with the letter ayin), and clothed them. This is a gesture of protection and love. In the school of Rabbi Meir, they read this phrase as “garments of light” (“or” with an aleph). God robed them with radiance.

Only after the man has given his wife a proper name do we find the Torah referring to God Himself by His proper name alone, namely Hashem (in Genesis 4). Until then He has been described as either Elokim or Hashem Elokim – Elokim being the impersonal aspect of God: God as law, God as power, God as justice. In other words, our relationship to God parallels our relationship to one another. Only when we respect and recognise the uniqueness of another person are we capable of respecting and recognising the uniqueness of God Himself.

In Genesis 1, God creates things – chemical elements, stars, planets, lifeforms, biological species. In Genesis 2-3, He creates people. In the first chapter, He creates systems, in the second chapter He creates relationships. It is fundamental to the Torah’s view of reality that these things belong to different worlds, distinct narratives, separate stories, alternative ways of seeing reality.

There are differences in tone as well. In the first, creation involves no effort on the part of God. He simply speaks. He says “Let there be,” and there was. In the second, He is actively engaged. When it comes to the creation of the first human, He does not merely say, “Let us make Man in our image according to our likeness.” He performs the creation Himself, like sculptor fashioning an image out of clay: “Then the Lord God formed the man from the dust of the ground and breathed into his nostrils the breath of life, and the man became a living being.”

In Genesis 1, God effortlessly summons the universe into being. In Genesis 2, He becomes a gardener: “Now the Lord God planted a garden …” We wonder why on earth God, who has just created the entire universe, should become a gardener. The Torah gives us the answer, and it is very moving: “The Lord God took the man and put him in the Garden of Eden to work it and take care of it.” God wanted to give man the dignity of work, of being a creator, not just a creation. And in case the man should view such labour as undignified, God became a gardener Himself to show that this work too is Divine, and in performing it, man becomes God’s partner in the work of creation.

Then comes the extraordinarily poignant verse, “The Lord God said, ‘It is not good for the man to be alone. I will make a helper suitable for him.” God feels for the existential isolation of the first man. There was no such moment in the previous chapter. There, God simply creates. Here, God empathises. He enters into the human mind. He feels what we feel. There is no such moment in any other ancient religious literature. What is radical about biblical monotheism is not just that there is only one God, not just that He is the source of all that exists, but that God is closer to us than we are to ourselves. God knew the loneliness of the first man before the first man knew it of himself.

That is what the second creation account is telling us. Creation of things is relatively easy, creation of relationships is hard. Look at the tender concern God shows for the first human beings in Genesis 2-3. He wants man to have the dignity of work. He wants man to know that work itself is Divine. He gives man the capacity to name the animals. He cares when He senses the onset of loneliness. He creates the first woman. He watches, in exasperation, as the first human couple commit this first sin. Finally, when the man gives his wife a proper name, recognising for the first time that she is different from him and that she can do something he will never do, He clothes them both so that they will not go naked into the world. That is the God, not of creation (Elokim) but of love (Hashem).

In Genesis 1, God creates the universe. Nothing vaster can be imagined, and we keep discovering that the universe is bigger than we thought. In 2016, a study based on three-dimensional modelling of images produced by the Hubble space telescope concluded that there were between 10 and 20 times as many galaxies as astronomers had previously thought. There are more than a hundred stars for every grain of sand on earth.

And yet, almost in the same breath as it speaks of the panoply of creation, the Torah tells us that God took time to breathe the breath of life into the first human, give him dignified work, enter his loneliness, make him a wife, and robe them both with garments of light when the time came for them to leave Eden and make their way in the world.

I believe that relationships are where our humanity is born and grows, flowers and flourishes. It is by loving people that we learn to love God and feel the fullness of His love for us.