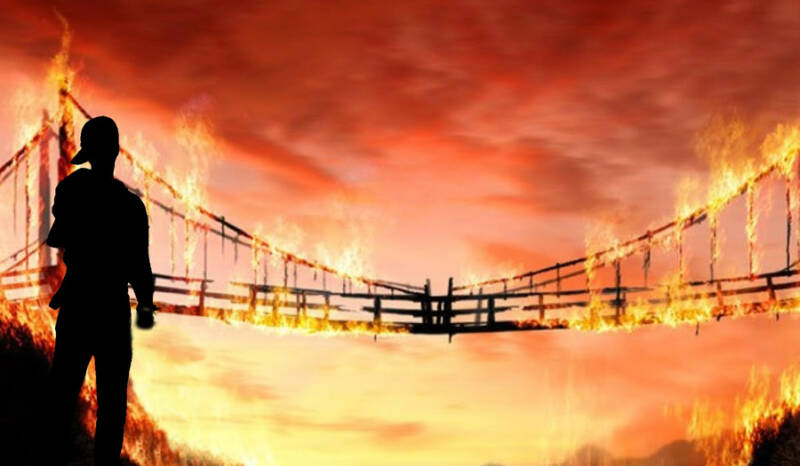 Our parsha begins with an apparently simple proposition:

When Pharaoh let the people go, God did not lead them on the road through the land of the Philistines, though that was shorter. For God said, “If they face war, they might change their minds and return to Egypt.” So God led the people around by the desert road toward the Red Sea. The Israelites went up out of Egypt prepared for battle.

God did not lead the people to the Promised Land by the coastal route, which would have been more direct[1]. The reason given is that it was such an important highway, it constituted the main path from which Egypt might be attacked by forces from the north-west such as the Hittite army. The Egyptians established a series of forts along the way, which the Israelites would have found impregnable.

However, if we delve deeper, this decision raises a number of questions. First: we see that the alternative route they took was potentially even more traumatic. God led them around by the desert road towards the Red Sea. The result, as we soon discover, is that the Israelites, when they saw the Egyptian chariots pursuing them in the distance, had nowhere to go. They were terrified. They were not spared the fear of war. Hence the first question: why the Red Sea? On the face of it, it was the worst of all possible routes.

Secondly, if God did not want the Israelites to face war, and if He believed it would lead the people to want to return to Egypt, why did the Israelites leave chamushim, “armed” or “ready for battle”?

Third: if God did not want the Israelites to face war, why did He provoke Pharaoh into pursuing them? The text says so explicitly. “And I will harden Pharaoh’s heart, and he will pursue them. But I will gain glory for Myself through Pharaoh and all his army, and the Egyptians will know that I am the Lord.” (Ex. 14:4). Three times in this one chapter we are told that God hardened Pharaoh’s heart (Ex. 14:4, 8, 17).

The Torah explains this motivation of “I will gain glory for Myself.” The defeat of the Egyptian army at the Sea would become an eternal reminder of God’s power. “The Egyptians will know that I am the Lord.” Egypt may come to realise that there is a force more powerful than chariots, armies and military might. But the opening of our parsha suggested that God was primarily concerned with the Israelites’ feelings – not with His glory or the Egyptians’ belief. If God wanted the Israelites not to see war, as the opening verse states, why did He orchestrate that they witnessed this attack at the Sea?

Fourth: God did not want the Israelites to have reason to say, “Let us return to Egypt.” However, at the Red Sea, they did tell Moses something very close to this:

“Was it because there were no graves in Egypt that you brought us to the desert to die? What have you done to us by bringing us out of Egypt?  Didn’t we say to you in Egypt, ‘Leave us alone; let us serve the Egyptians’? It would have been better for us to serve the Egyptians than to die in the desert!”

Fifth: God clearly wanted the Israelites to develop the self-confidence that would give them the strength to fight the battles they would have to fight in order to conquer the Holy Land. Why then did He bring about a state of affairs at the Sea where they had to do exactly the opposite, leaving everything to God:

Moses answered the people, “Do not be afraid. Stand firm and you will see the deliverance the Lord will bring you today. The Egyptians you see today you will never see again. The Lord will fight for you; you need only to be still.”

The miracle that followed has so engraved itself on Jewish minds that we recite the Song at the Sea in our daily Morning Service. The division of the Sea was, in its way, the greatest of all the miracles. But it did not contribute to Jewish self-confidence and self-reliance. The Lord will fight for you; you need only to be still. The Egyptians were defeated not by the Israelites but by God, and not by conventional warfare but by a miracle. How then did the encounter teach the Israelites courage?

Sixth: The parsha ends with another battle, against the Amalekites. But this time, there is no complaint on the part of the people, no fear, no trauma, no despair. Joshua leads the people in battle. Moses, supported by Aaron and Hur, stands on a hilltop, his arms upraised, and as the people look up to Heaven, they are inspired, strengthened, and they prevail.

Where then was the fear spoken of in the opening verse of the parsha? Faced by the Amalekites, in some ways more fearsome than the Egyptians, the Israelites did not say they wanted to return to Egypt. The sheer silence on the part of the people stands in the strongest possible contrast to their previous complaints about water and food.

The Israelites turn out to be good warriors.

The answer, it seems to me, is that we have perhaps the first recorded instance of what later became a key military strategy. In one of the more famous examples, Julius Caesar ordered his army to cross the Rubicon in the course of his attempt to seize power. Such an act was strictly forbidden in Roman law. He and the army had to win, or they would be executed. Hence the phrase, “to cross the Rubicon.”

In 1519, Cortes (the Spanish commander engaged in the conquest of Mexico) burned the ships that had carried his men. His soldiers now had no possibility of escape. They had to win or die. Hence the phrase, “burning your boats.”

What these tactics have in common is the idea that sometimes you have to arrange that there is no way back, no line of retreat, no possibility of fear-induced escape. It is a radical strategy, undertaken when the stakes are high and when exceptional reserves of courage are necessary. That is the logic of the events in this week’s parsha that are otherwise hard to understand.

Rashbam makes a remarkable comment, connecting Jacob’s wrestling match with the angel to the episode in which Moses, returning to Egypt, is attacked by God (Ex. 4:24) and also linking this to Jonah on the stormy ship.[3] All three, he says, were overcome by fear at the danger or difficulty that confronted them, and each wanted to escape. Jacob’s angel, Moses’ encounter and the tempest that threatened to sink Jonah’s ship, were all ways in which Heaven cut off the line of retreat.

Any great undertaking comes with fear. Often we fear failure. Sometimes we even fear success. Are we worthy of it? Can we sustain it? We long for the security of the familiar, the life we have known. We are afraid of the unknown, the uncharted territory. And the journey itself exposes our vulnerability. We have left home; we have not yet reached our destination. Rashbam was telling us that if we have these feelings we should not feel ashamed. Even the greatest people have felt fear. Courage is not fearlessness. It is, in the words of a well-known book title, feeling the fear but doing it anyway.

Sometimes the only way to do this is to know that there is no way back. Franz Kafka in one of his aphorisms wrote, “Beyond a certain point there is no return. This point has to be reached.”[4] That is what crossing the Red Sea was for the Israelites, and why it was essential that they experienced it at an early stage in their journey. It marked the point of no return; the line of no retreat; the critical point at which they could only move forward.

I believe that some of the greatest positive changes in our lives come when, having undertaken a challenge, we cross our own Red Sea and know that there is no way back. There is only a way forward.
Then God gives us the strength to fight our battles and win.

[1] See the newly published volume, Exodus: The Koren Tanach of the Land of Israel which includes maps, beautiful illustrations, detailed explanations, and my new translation of the Hebrew text.
[2] This explanation does not work for the Midrashic view that the Israelites emerged from the sea on the same bank as they had entered. But this is, as far as I can tell, a minority view.
[3] Rashbam, Commentary to Gen. 32:21-29.
[4] Kafka, Notebooks, 16.