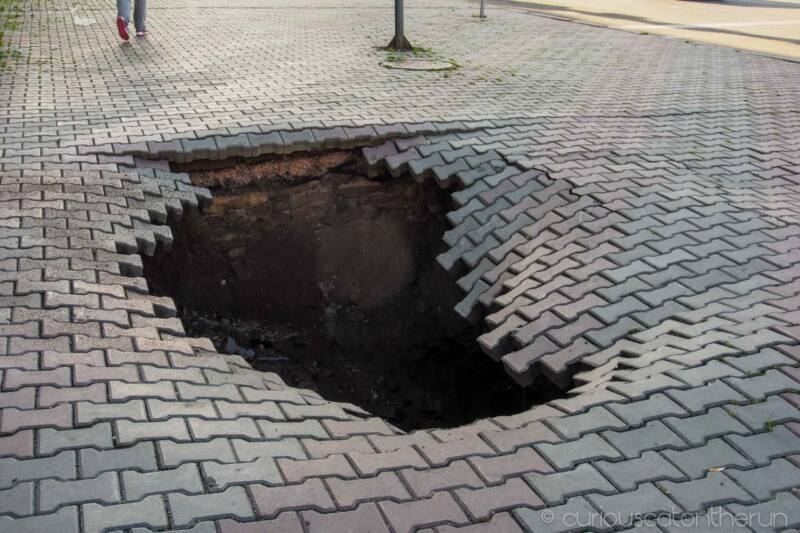 At the end of his new book, Tribe of Mentors, Timothy Ferris cites the following poem by Portia Nelson. It’s called ‘Autobiography in Five Short Chapters’:

That is probably how life is like for many of us. It certainly was for me. We set off, confident that we know where we are going, only to find that it is rarely that simple. “Life,” said John Lennon, “is what happens while we are making other plans.” We fall into holes. We make mistakes. Then we make them again. Eventually we avoid them, but by then we may have the growing suspicion that we took the wrong turning to begin with. If we are lucky, we find another road.
Hence the opening of this week’s parsha:

When Pharaoh let the people leave, God did not lead them by way of the land of the Philistines, although that was nearby, for God said, “Lest the people change their minds when they encounter war and return to Egypt.”  So God brought the people by a roundabout route by way of the desert to the Red Sea …

This is actually quite a difficult text to understand. In and of itself it makes eminent sense. God did not want the people immediately to face battle with the seven nations in the land of Canaan since, as newly liberated slaves, they were psychologically unprepared for war. We now know also that there was an additional factor. There were Egyptian forts at various points along the sea route to Canaan, so the Israelites would come up against them even before reaching the land.

Three facts, though, still need to be reckoned with. First, the Torah itself says that God “hardened Pharaoh’s heart” (Ex. 14:4), leading him to pursue the Israelites with a force of six hundred chariots. This so demoralised the Israelites that they cried, “Were there not there are enough graves in Egypt that you had to bring us out here to die in the desert? … It would have been better to be slaves in Egypt than to die in the desert” (Ex. 14:11-12). Why did God cause Pharaoh to pursue the Israelites if He did not want them to think of going back? He should surely have made the first stage of their journey as undemanding as possible.

Second, the people did face war long before they came anywhere near the land of Canaan. They did so almost immediately after crossing the Red Sea, when they were attacked by the Amalekites (Ex. 17:8). The strange fact is that when they had to fight a battle on their own, without any miraculous intervention from God, they expressed no fear. Inspired by Moses’ upraised arms, they fought and won (Ex. 17:10-13).

Third, the roundabout route failed to prevent the people’s response to the report of the spies. Terrified by their account of the strength of the native population and the well-fortified nature of their cities, they said, “Let us appoint a (new) leader and return to Egypt” (Num. 14:4).

It seems, therefore, that the circuitous route by which God led the Israelites was not to prevent their wanting to return, but rather, to prevent their being able to return. Leading them miraculously through the Red Sea was like Caesar crossing the Rubicon, or Cortes burning his boats before his conquest of the Aztecs. It made retreat impossible. Whatever their doubts and fears, the Israelites had no real choice. They had to continue onward, even if in the end it took forty years and a new generation to reach their destination.

What this meant was that almost from the dawn of their history as a nation, Jews were forced to learn that lasting achievement takes time. You can never get there by the shortest road. Thanks to the work of Anders Ericsson, popularised by Malcolm Gladwell, we know that greatness in many fields takes 10,000 hours of practice.[1] The history of all too many nations born after the Second World War and the end of empire, shows that you can’t create a democracy by United Nations decree, or freedom by a Universal Declaration of Human Rights. People who try to get rich fast often discover that their wealth is like Jonah’s gourd: it appears overnight and disappears the next day. When you try to take a shortcut, you find yourself, like the poet, falling into a hole.

The Talmud tells the story of Rabbi Yehoshua ben Hanania who asked a young man sitting at a crossroad, “Which is the way to the town?” The young man pointed to one of the paths and said, “This way is short but long. The other way is long but short.” Yehoshua ben Hanania set out on the first path, quickly arrived at the town, but found his way blocked by gardens and orchards. He then returned to the young man and said, “Didn’t you tell me that this path was short?” “I did,” said the young man, “but I also warned you that it was long.”[2] Better to take the long road that eventually gets you to your destination than the short one that doesn’t even though it looks as if it does.

Today’s world is full of books, videos and programmes promising a fast-track to almost anything from weight loss to riches to success and fame. The life-changing idea symbolised by the route God led the Israelites on when they left Egypt is that there are no fast tracks. The long way is short; the short way is long. Better by far to know at the outset that the road is long, the work is hard, and there will be many setbacks and false turnings. You will need grit, resilience, stamina and persistence. In place of a pillar of cloud leading the way, you will need the advice of mentors and the encouragement of friends. But the journey is exhilarating, and there is no other way. The harder it gets, the stronger you become.

[1] See Anders Ericsson, Peak: Secrets From The New Science of Expertise, Mariner, 2017; Malcolm Gladwell, Outliers, Little, Brown, 2013. Of course, as many have pointed out, this is not true in all fields, nor is it the only relevant factor.
[2] Eruvin 53b.

LIFE-CHANGING IDEA #16
There are no fast tracks. Lasting achievement takes time. You can never get there by the shortest road. The harder it gets, the stronger you become.