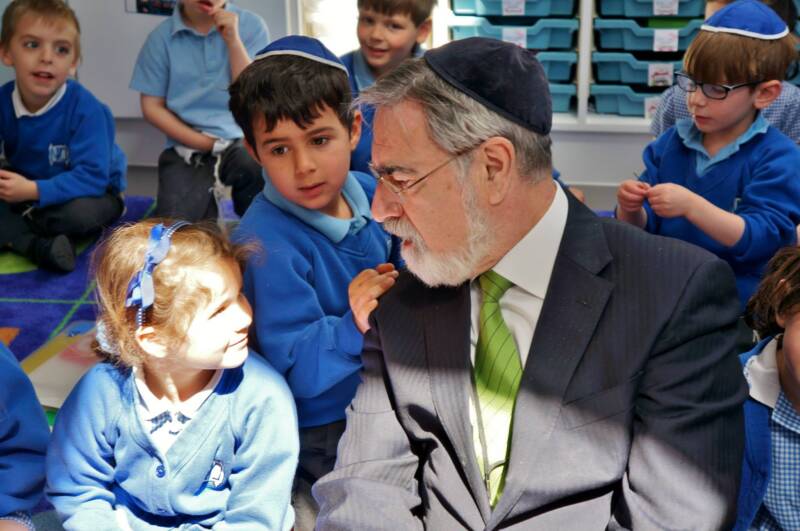 “And you shall explain to your child on that day, ‘It is because of what the Lord did for me when I went free from Egypt’.”

It was the moment for which they had been waiting for more than two hundred years. The Israelites, slaves in Egypt, were about to go free. Ten plagues had struck the country. The people were the first to understand; Pharaoh was the last. God was on the side of freedom and human dignity. You cannot build a nation, however strong your police and army, by enslaving some for the benefit of others. History will turn against you, as it has against every tyranny known to mankind.

And now the time had arrived. The Israelites were on the brink of their release. Moses, their leader, gathered them together and prepared to address them. What would he speak about at this fateful juncture, the birth of a people? He could have spoken about many things. He might have talked about liberty, the breaking of their chains, and the end of slavery. He might have talked about the destination to which they were about to travel, the “land flowing with milk and honey”. Or he might have chosen a more sombre theme: the journey that lay ahead, the dangers they would face: what Nelson Mandela called “the long walk to freedom”. Any one of these would have been the speech of a great leader sensing an historic moment in the destiny of Israel.

Moses did none of these things. Instead he spoke about children, and the distant future, and the duty to pass on memory to generations yet unborn. Three times in this week’s sedra he turns to the theme:

And when your children ask you, ‘What do you mean by this rite?’ you shall say…

And you shall explain to your child on that day, ‘It is because of what the Lord did for me when I went free from Egypt’

And when, in time to come, your child asks you, saying, ‘What does this mean?’ you shall answer…

About to gain their freedom, the Israelites were told that they had to become a nation of educators. That is what made Moses not just a great leader, but a unique one. What the Torah is teaching is that freedom is won, not on the battlefield, nor in the political arena, nor in the courts, national or international, but in the human imagination and will. To defend a country you need an army. But to defend a free society you need schools. You need families and an educational system in which ideals are passed on from one generation to the next, and never lost, or despaired of, or obscured. So Jews became the people whose passion was education, whose citadels were schools and whose heroes were teachers.

The result was that by the time the Second Temple was destroyed, Jews had constructed the world’s first system of universal compulsory education, paid for by public funds:

Remember for good the man Joshua ben Gamla, because were it not for him the Torah would have been forgotten from Israel. At first a child was taught by a father, and as a result orphans were left uneducated. It was then resolved that teachers of children should be appointed in Jerusalem, and a father (who lived outside the city) would bring his child there and have him taught, but the orphan was still left without tuition. Then it was resolved to appoint teachers in each district, and boys of the age of sixteen and seventeen were placed under them; but when the teacher was angry with a pupil, he would rebel and leave. Finally Joshua ben Gamla came and instituted that teachers be appointed in every province and every city, and children from the age of six or seven were placed under their charge.

By contrast, England did not institute universal compulsory education until 1870. The seriousness the Sages attached to education can be measured by the following two passages:

If a city has made no provision for the education of the young, its inhabitants are placed under a ban, until teachers have been engaged. If they persistently neglect this duty, the city is excommunicated, for the world only survives by the merit of the breath of schoolchildren.

Rabbi Judah the Prince sent R. Chiyya and R. Issi and R. Ami on a mission through the towns of Israel to establish teachers in every place. They came to a town where there were no teachers. They said to the inhabitants, “Bring us the defenders of the town.” They brought them the military guard. The Rabbis said, “These are not the protectors of the town but its destroyers.” “Who then are the protectors?” asked the inhabitants. They answered, “The teachers.”

No other faith has attached a higher value to study. None has given it a higher position in the scale of communal priorities. From the very outset Israel knew that freedom cannot be created by legislation, nor can it be sustained by political structures alone. As the American justice Judge Learned Hand put it: “Liberty lies in the hearts of men and women; when it dies there, no constitution, no law, no court can save it.” That is the truth epitomized in a remarkable exegesis given by the Sages. They based it on the following verse about the tablets Moses received at Sinai:

They reinterpreted it as follows:

Read not charut, engraved, but cherut, freedom, for there is none so free as one who occupies himself with the study of Torah.

What they meant was that if the law is engraved on the hearts of the people, it does not need to be enforced by police. True freedom – cherut – is the ability to control oneself without having to be controlled by others. Without accepting voluntarily a code of moral and ethical restraints, liberty becomes license and society itself a battleground of warring instincts and desires.

This idea, fateful in its implications, was first articulated by Moses in this week’s sedra, in his words to the assembled Israelites. He was telling them that freedom is more than a moment of political triumph. It is a constant endeavour, throughout the ages, to teach those who come after us the battles our ancestors fought, and why, so that my freedom is never sacrificed to yours, or purchased at the cost of someone else’s. That is why, to this day, on Passover we eat matzah, the unleavened bread of affliction, and taste maror, the bitter herbs of slavery, to remember the sharp taste of affliction and never be tempted to afflict others.

The oldest and most tragic phenomenon in history is that empires, which once bestrode the narrow world like a colossus, eventually decline and disappear. Freedom becomes individualism (“each doing what was right in his own eyes”, Judges 21:25), individualism becomes chaos, chaos becomes the search for order, and the search for order becomes a new tyranny imposing its will by the use of force. What, thanks to Torah, Jews never forgot is that freedom is a never-ending effort of education in which parents, teachers, homes and schools are all partners in the dialogue between the generations.

Learning, Talmud Torah, is the very foundation of Judaism, the guardian of our heritage and hope. That is why, when tradition conferred on Moses the greatest honour, it did not call him ‘our hero’, ‘our Prophet’ or ‘our King’. It called him, simply, Moshe Rabbeinu, Moses our teacher. For it is in the arena of education that the battle for the good society is lost or won.