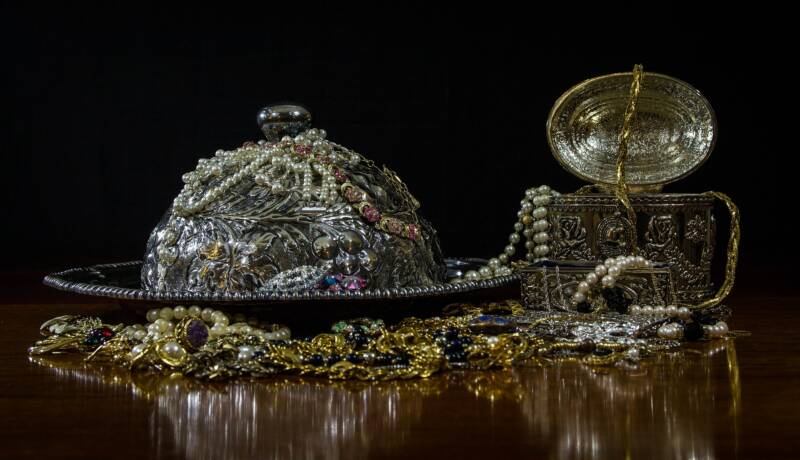 The detail in the story of the Exodus is highly emphasised in the Torah, yet at first sight it appears almost unintelligible. Here is the command:

Then the Lord said to Moses, “One last plague will I send against Pharaoh, against Egypt. After that, he will send you forth from here, and when he does, he will drive you out completely. Now tell the people, men and women, to ask of their neighbours articles of silver and of gold.”

And here is its fulfillment:

The Egyptians urged the people to make haste and leave the country. “All of us will die,” they said. So the people took their dough before it could rise, carrying it on their shoulders in kneading pans wrapped in their clothing. As Moses had told them, the Israelites had requested items of silver and gold, and clothing, of the Egyptians, and the Lord had given the people favour in the eyes of the Egyptians, and they had granted their request. Thus they despoiled Egypt.

Why the silver and gold? The Israelites were in such a hurry to leave, and the Egyptians so hasty in urging their departure, that they did not even have time for the dough to rise. Why then was God so insistent that they take the time to ask for these parting gifts? What conceivable use did they have for them in the long journey across the Wilderness?

Our perplexity is made all the more acute when we remember what they actually did with the gold. They used it to commit the worst sin of those years: the making of a Golden Calf. The Talmud (Brachot 32a) says that Moses referred to this fact in defending Israel. In effect, he said to God: Had You not told them to take gold from Egypt, they would not have had the materials with which to make the Calf!

Yet we cannot doubt that this detail is fundamental to the story, because God refers to it in His first encounter with Moses, at the Burning Bush, before the Exodus had begun – long before Moses had returned to Egypt:

“And I will grant this people favour in the eyes of the Egyptians, so that when you leave, you will not leave empty-handed. Every woman shall ask her neighbour, ask any woman lodging with her, for objects of silver and gold, and for clothing, and you shall put these on your sons and daughters, and despoil [venitzaltem] the Egyptians.”

Why was this so important?

It is not until we reach the end of the Mosaic books that we can begin to understand it in retrospect. Two details from the book of Deuteronomy provide the key. The first has to do with the liberation of slaves:

If a fellow Hebrew, man or woman, is sold to you, they shall serve for you for six years; in the seventh year you shall set them free. And when you send one forth free, do not send them away empty-handed. Provide for them liberally from your flock, your threshing-floor, and your wine-press, giving them a share in the things with which the Lord your God has blessed you. Remember: you were a slave in Egypt and the Lord your God redeemed you; and so I give you this command today.

The second is one of the most striking commands of all, Moses’ insistence:

Do not despise an Edomite, for he is your kin. Do not hate an Egyptian, because you lived as a stranger in his land.

This is remarkable. The Israelites had been enslaved by the Egyptians. They owed them no debt of gratitude. On the contrary, they were entitled to feel a lingering resentment. Yet Moses insists that they should not do so. They should bear the Egyptians no ill will. Why? In this brief command we have one of the most profound insights into the nature of a free society.

A people driven by hate are not – cannot be – free. Had the people carried with them a burden of hatred and a desire for revenge, Moses would have taken the Israelites out of Egypt, but he would not have taken Egypt out of the Israelites. They would still be there, bound by chains of anger as restricting as any metal. To be free you have to let go of hate.

There is a fundamental difference between living with the past and living in the past. Judaism is a religion of memory. We remember the Exodus annually, even daily. But we do so for the sake of the future, not the past.

‘Do not oppress the stranger’, says the Torah, ‘because you know what it feels like to be a stranger.’ In other words: what you suffered, do not inflict. Memory is a moral tutorial. In Santayana’s famous words: those who do not remember the past are destined to repeat it. Israel remembers its past precisely in order not to repeat it. Moses’ message is: remember, but not in order to hate.

That means drawing a line over the resentments of the past. That is why, when a slave went free, his master had to give him gifts. This was not to compensate for the fact of slavery. There is no way of giving back the years spent in servitude. But there is a way of ensuring that the parting is done with goodwill, with some symbolic compensation. The gifts allow the former slave to reach emotional closure; to feel that a new chapter is beginning; to leave without anger and a sense of humiliation. One who has received gifts finds it hard to hate.

That is the significance of the silver and gold taken from the Egyptians by the Israelites at the express command of God. The early twentieth century commentator Benno Jacob translated the word venitzaltem in Ex. 3:22 as ‘you shall save,’ not ‘you shall despoil’ the Egyptians. The gifts they took from their neighbours were intended, Jacob argues, to persuade the Israelites that it was not the Egyptians as a whole, only Pharaoh and the leadership, who were responsible for their enslavement (see the commentary of Chief Rabbi J. H. Hertz to Ex. 3:22). They were meant to save the Egyptians from any possible future revenge by Israel.

The message could not be more germane to our situation in the early twenty-first century. In an age riven by ethnic and religious conflict, the message of the Torah rings true in our time. To be free, you have to let go of hate.