The Story We Tell 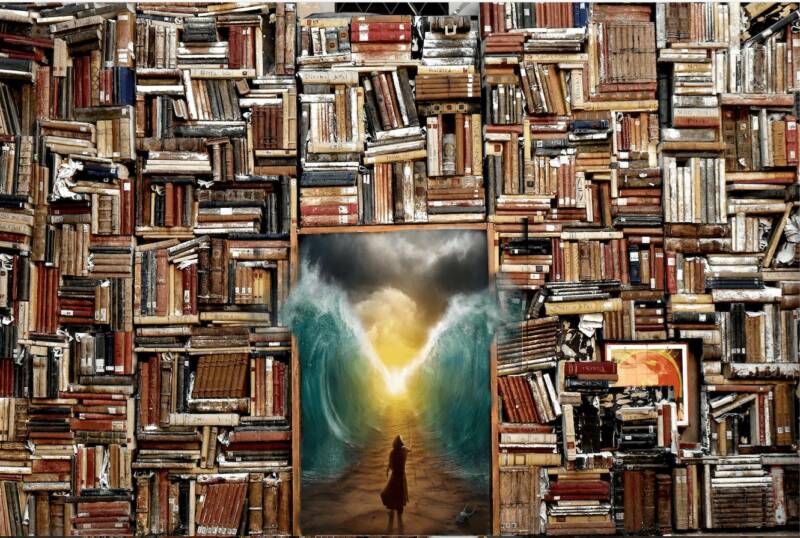 It remains one of the most counterintuitive passages in all of religious literature. Moses is addressing the Israelites just days before their release. They have been exiles for 210 years. After an initial period of affluence and ease, they have been oppressed, enslaved, and their male children killed in an act of slow genocide. Now, after signs and wonders and a series of plagues that have brought the greatest empire of the ancient world to its knees, they are about to go free.
Yet Moses does not talk about freedom, or the land flowing with milk and honey, or the journey they will have to undertake through the desert. Instead, three times, he turns to the distant future, when the journey is complete and the people – free at last – are in their own land. And what he talks about is not the land itself, or the society they will have to build or even the demands and responsibilities of freedom.[1]

Instead, he talks about education, specifically about the duty of parents to their children. He speaks about the questions children may ask when the epic events that are about to happen are, at best, a distant memory. He tells the Israelites to do what Jews have done from then to now. Tell your children the story. Do it in the maximally effective way. Re-enact the drama of exile and exodus, slavery and freedom. Get your children to ask questions. Make sure that you tell the story as your own, not as some dry account of history. Say that the way you live and the ceremonies you observe are “because of what God did for me” – not my ancestors but me. Make it vivid, make it personal, and make it live.

He says this not once but three times:

“It shall be that when you come to the land which God will give you as He said, and you observe this ceremony, and your children say to you, ‘What does this service mean to you?’ you shall say, ‘It is a Passover sacrifice to the Lord, who passed over the houses of the Israelites in Egypt when He struck the Egyptians and spared our homes.’”

“On that day you shall tell your child, ‘It is because of what the Lord did for me when I came out of Egypt’”

“In the future, when your child asks you, ‘What is this?’ you shall tell him, ‘With a mighty hand, the Lord brought us out from Egypt, from the land of slavery.’”

Why was this the most important thing he could do in this intense moment of redemption? Because freedom is the work of a nation, nations need identity, identity needs memory, and memory is encoded in the stories we tell. Without narrative, there is no memory, and without memory, we have no identity. The most powerful link between the generations is the tale of those who came before us – a tale that becomes ours, and that we hand on as a sacred heritage to those who will come after us. We are the story we tell ourselves about ourselves, and identity begins in the story parents tell their children.

That narrative provides the answer to the three fundamental questions every reflective individual must ask at some stage in their lives: Who am I? Why am I here? How then shall I live? There are many answers to these questions, but the Jewish ones are: I am a member of the people whom God rescued from slavery to freedom. I am here to build a society that honours the freedom of others, not just my own. And I must live in conscious knowledge that freedom is the gift of God, honoured by keeping His covenant of law and love.

Twice in the history of the West this fact was forgotten, or ignored, or rebelled against. In the 17th and 18th century, there was a determined effort to create a world without identities. This was the project called the Enlightenment. It was a noble dream. To it we owe many developments whose value is beyond question and that we must strive to preserve. However, one aspect of it failed and was bound to fail: the attempt to live without identity.

The argument went like this. Identity throughout the Middle Ages was based on religion. But religion had for centuries led to war between Christians and Muslims. Then, following the Reformation, it led to war between Christian and Christian, Protestant and Catholic. Therefore, to abolish war one had to move beyond identity. Identities are particular. Therefore, let us worship only the things that are universal: reason and observation, philosophy and science. Let us have systems, not stories. Then we will become one humanity, like the world before Babel. As Schiller put it and Beethoven set to music in the last movement of the Ninth Symphony: Alle Menschen werden Brüder, “All men will be brothers.”

It cannot be done, at least as humanity is presently constituted. The reaction, when it came, was fierce and disastrous. The nineteenth century saw the return of the repressed. Identity came back with a vengeance, this time based not on religion but on one of three substitutes for it: the nation state, the (Aryan) race, and the (working) class. In the 20th century, the nation state led to two world wars. Race led to the Holocaust. The class struggle led to Stalin, the Gulag and the KGB. A hundred million people were killed in the name of three false gods.

For the past fifty years the West has been embarked on a second attempt to abolish identity, this time in the opposite direction. What the secular West now worships is not the universal but the individual: the self, the “Me,” the “I.” Morality – the thick code of shared values binding society together for the sake of the common good – has been dissolved into the right of each individual to do or be anything he or she chooses, so long as they do not directly harm others.

Identities have become mere masks we wear temporarily and without commitment. For large sections of society, marriage is an anachronism, parenthood delayed or declined, and community a faceless crowd. We still have stories, from Harry Potter to Lord of the Rings to Star Wars, but they are films, fictions, fantasies – a mode not of engagement but of escapism. Such a world is supremely tolerant, until it meets views not to its liking, when it quickly becomes brutishly intolerant, and eventually degenerates into the politics of the mob. This is populism, the prelude to tyranny.

Today’s hyper-individualism will not last. We are social animals. We cannot live without identities, families, communities and collective responsibility. Which means we cannot live without the stories that connect us to a past, a future and a larger group whose history and destiny we share. The biblical insight still stands. To create and sustain a free society, you have to teach your children the story of how we achieved freedom and what its absence tastes like: the unleavened bread of affliction and the bitter herbs of slavery. Lose the story and eventually you lose your freedom.  That is what happens when you forget who you are and why.

The greatest gift we can give our children is not money or possessions but a story – a real story, not a fantasy, one that connects them to us and to a rich heritage of high ideals. We are not particles of dust blown this way or that by the passing winds of fad and fashion. We are heirs to a story that inspired a hundred generations of our ancestors and eventually transformed the Western world. What you forget, you lose. The West is forgetting its story. We must never forget ours.

With the hindsight of thirty-three centuries we can see how right Moses was. A story told across the generations is the gift of an identity, and when you know who you are and why, you can navigate the wilderness of time with courage and confidence. That is a life-changing idea.

[1] That, of course, is a primary theme of the book of Deuteronomy.

LIFE-CHANGING IDEA #15
Know your own story, because a story told across the generations is a gift. When you know who you are and why, you can navigate the wilderness of time with courage and confidence.