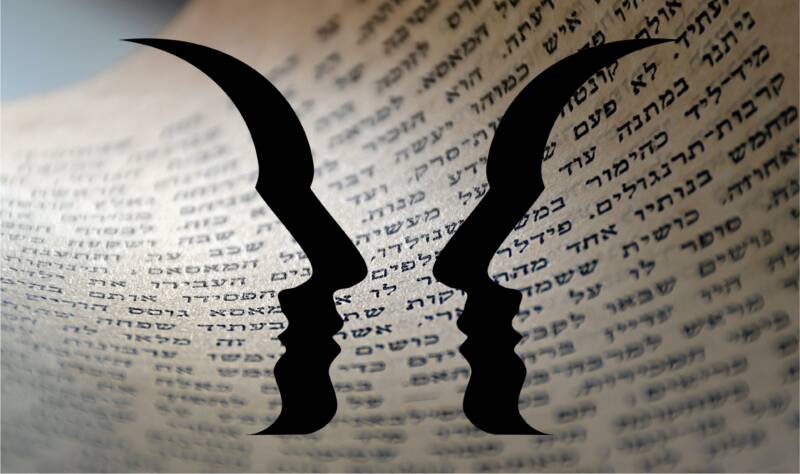 In two sentences in this week’s sedra, the Torah summarises the entire relationship between God and the people of Israel:

Here, set out with disarming simplicity, is the dual relationship, the reciprocity, at the heart of the covenant. It is an idea made famous in the form of two jingles.

The first, that of William Norman Ewer:

How odd
Of God
To choose
The Jews

And the second, the Jewish riposte:

Not quite
So odd –
The Jews
Chose God!

Between God and the people is a mutual bond of love. The Israelites pledge themselves to be faithful to God and His commands. God pledges Himself to cherish the people as His treasure – for though He is the God of all humanity, He holds a special place in His affection (to speak anthropomorphically) for the descendants of those who first heard and heeded His call. This is the whole of Tanach, the Hebrew Bible. The rest is commentary.

The English translation, above, is that of the Jewish Publication Society Tanach. Any translation, however, tends to conceal the difficulty in the key verb in both sentences: le-ha’amir. What is strange is that, on the one hand, it is a form of one the most common of all biblical verbs, lomar, “to say”. On the other, the specific form used here – the hiphil, or causative form – is unique. Nowhere else does it appear in this form in the Bible, and its meaning is, as a result, obscure.

The JPS translation reads it as “affirmed”. Aryeh Kaplan, in The Living Torah, reads it as “declared allegiance to”. Robert Alter renders it: “proclaimed”. Other interpretations include “separated to yourself” (Rashi), “chosen” (Septuagint), “recognised” (Saadia Gaon), “raised” (Radak, Sforno), “betrothed” (Malbim), “given fame to” (Ibn Janach), “exchanged everything else for” (Chizkuni), “accepted the uniqueness of” (Rashi to Chagigah 3a), or “caused God to declare” (Judah Halevi, cited by Ibn Ezra.

What is the significance of this unique form of the verb “to say”? Why is it used here? The use of language in the Torah is not vague, accidental, approximate, imprecise. In general, in the Mosaic books, style mirrors substance.

The way something is said is often connected to what is being said. So it is here. What we have before us is a proposition of far-reaching consequence for the most fundamental question humanity can ask itself: What is the nature of the bond between human beings and God – or between human beings and one another – such that we can endow our lives with the charisma of grace? The answer given by the Torah, so profound that we need to stop and meditate on it, lies in language, speech, words. Hence the singling out, in this definitive statement of Jewish faith, of the verb meaning “to say”.

We owe to the later work of Wittgenstein, developed further by J. L. Austin (How to do things with words) and J. R. Searle (Speech Acts), the realisation that language has many functions. Since the days of Socrates, philosophers have tended to concentrate on just one function: the use of language to describe, or state facts.

Hence the key questions of philosophy and later science: Is this statement true? Does it correspond to the facts? Is it consistent with other facts? Can I be sure? What evidence do I have? What warrant do I have for believing what I believe? Language is the medium we use to describe what is.

But that is only one use of language, and there are many others. We use it to classify, to divide the world up into particular slices of reality. We also use it to evaluate. “Patriotism” and “jingoism” both denote the same phenomenon – loyalty to one’s country – but with opposite evaluations:
Patriotism = good, jingoism = bad.

We use language to express emotion. Sometimes we use it simply to establish a relationship. Malinowsky called this phatic communion, where what matters is not what we say but the mere fact that we are talking to one another (Robin Dunbar has recently argued that speech for humans is like “grooming behaviour” among primates). We can also use language to question, command, hypothesise and imagine. There are literary genres like fiction and poetry which use language in complex ways to extend our imaginative engagement with reality.

The philosophical-scientific mindset that sees the sole significant function of language as descriptive – taken to an extreme in the philosophical movement known as “logical positivism” – is a form of tone-deafness to the rich variety of speech.

The Mosaic books contain a deep set of reflections on the nature and power of language. This has much to do with the fact that the Israelites of Moses’ day were in the place where, and the time when, the first alphabet appeared, the proto-semitic script from which all subsequent alphabets are directly or indirectly derived.

Judaism marks the world’s first transition on a national scale from an oral to a literate culture. Hence the unique significance it attaches to the spoken and written word. We discover this at the very beginning of the Torah. It takes the form of the radical abandonment of myth. God spoke and the world came into being. There is no contest, no struggle, no use of force to subdue rival powers – as there is in every myth without exception. Instead, the key verb in Genesis 1 is simply leimor, “God said [vayomer], Let there be . . . and there was.” Language creates worlds.

That, of course, is Divine — not human – speech. However, J. L. Austin pointed out that there is a human counterpart. There are certain things we can create with words when we use them in a special way. Austin called this use of speech performative utterance (more technically, illocutionary acts). So, for example, when a judge says, “This court is now in session”, he is not describing something but doing something. When a groom says to his bride under the wedding canopy, “Behold you are betrothed to me by this ring according to the laws of Moses and Israel”, he is not stating a fact but creating a fact.

This is the single most radical proposition in the Hebrew Bible. It has no real counterpart in any other religion. What is supremely holy is language, when used to create a moral bond between two parties. This means that the supreme form of relationship is one that does not depend on power, superior force, or dominant-submissive hierarchy. In a covenantal relationship both parties respect the dignity of the other. A covenant exists only in virtue of freely given consent. It also means that between Infinite God and infinitesimal humanity there can be relationship – because, through language, they can communicate with one another. The key facts of the Torah are that [a] God speaks and [b] God listens. The use of language to create a mutually binding relationship is what links God and humankind. Thus the two verses mean: “Today, by an act of speech, you have made God your God, and God has made you His people”. Words, language, an act of saying, have created an open-ended, eternally binding relationship.

Hence the name I have given to my series of Torah commentaries: Covenant and Conversation. Judaism is a covenant, a marriage between God and a people. The Torah is the written record of that covenant. It is Israel’s marriage-contract as God’s bride. Conversation – speaking and listening – is what makes covenant possible. Hence the dual form of Torah: the written Torah, through which God speaks to us and the Oral Torah through which we speak to God by way of interpreting His word. Judaism is the open-ended, mutually binding, conversation between Heaven and Earth.

Despite the deep influence of Judaism on two later faiths, Christianity and Islam, neither adopted this idea (to be sure, some Christian theologians speak of covenant, but a different kind of covenant, more unilateral than reciprocal). There are no conversations between God and human beings in either the New Testament or the Koran – none that echo the dialogues in Tanach between God and Abraham, Moses, Elijah, Hosea, Jeremiah, Jonah, Habakkuk and Job. Judaism, Christianity and Islam – the religion of sacred dialogue, the religion of salvation and the religion of submission – are three different things. The use of language to create a moral bond of love between the Infinite and the finite – through covenant on the one hand, conversation on the other – is what makes Judaism different.

That is what is set out simply in these two verses: Speaking a relationship into being, le-ha’amir, is what makes God our God, and us, His people.