Journey of the Generations 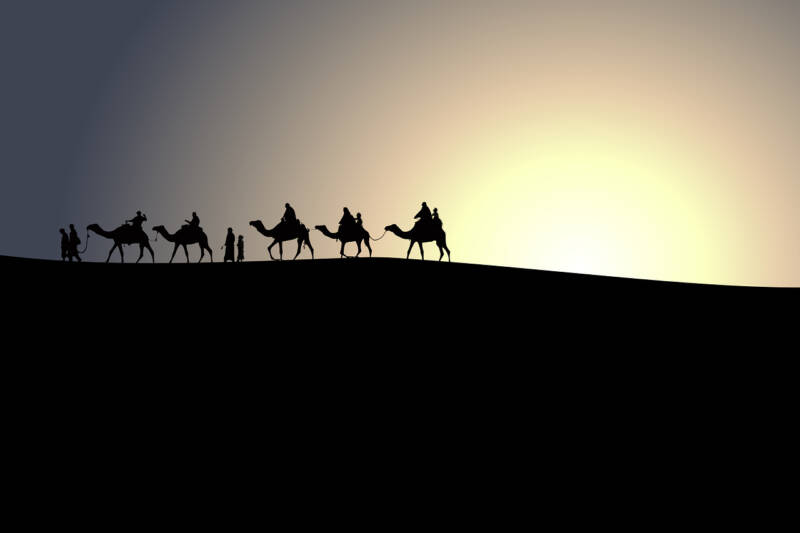 Journey of the Generations

Mark Twain said it most pithily:

When I was a boy of fourteen, my father was so ignorant I could hardly stand to have the old man around. But when I got to be twenty-one, I was astonished at how much the old man had learned in seven years.

Whether Freud was right or wrong about the Oedipus complex, there is surely this much truth to it, that the power and pain of adolescence is that we seek to define ourselves as different, individuated, someone other than our parents. When we were young they were the sustaining presence in our lives, our security, our stability, the source that grounds us in this world.

The first and deepest terror we have as very young children is separation anxiety: the absence of parents, especially of the mother. Young children will play happily so long as their mother or care-giver is within sight. Absent that, and there is panic. We are too young to venture into the world on our own. It is precisely the stable, predictable presence of parents in our early years that gives us a basic sense of trust in life.

But then comes the time, as we approach adulthood, when we have to learn to make our own way in the world. Those are the years of searching and in some cases, rebellion. They are what make adolescence so fraught. The Hebrew word for youth – the root is n-a-r – has these connotations of ‘awakening’ and ‘shaking’. We begin to define ourselves by reference to our friends, our peer-group, rather than our family. Often there is tension between the generations.

The literary theorist Harold Bloom wrote two fascinating books, The Anxiety of Influence and Maps of Misreading,[1] in which, in Freudian style, he argued that strong poets make space for themselves by deliberately misinterpreting or misunderstanding their predecessors. Otherwise – if you were really in awe of the great poets that came before you – you would be stymied by a sense that everything that could be said has been said, and better than you could possibly do. Creating the space we need to be ourselves often involves an adversarial relationship to those who came before us, and that includes our parents.

One of the great discoveries that tends to come with age is that, having spent what seems like a lifetime of running away from our parents, we have become very much like them – and the further away we ran, the closer we became. Hence the truth in Mark Twain’s insight. It needs time and distance to see their wisdom, to see how much we owe our parents, and to acknowledge how much of them lives on in us.

The way the Torah does this in relation to Abraham (or Abram as he was then called) is remarkable in its subtlety. Lech Lecha, and indeed Jewish history, begins with the words, “God said to Abraham, ‘Go from your land, your birthplace, and your father’s house to a land I will show you” (Gen. 12:1). This is the boldest beginning of any account of a life in the Hebrew Bible. It seems to come from nowhere. The Torah gives us no portrait of Abraham’s childhood, his youth, his relationship with the other members of his family, how he came to marry Sarah, or the qualities of character that made God single him out to become the initiator of what ultimately turned out to be the greatest revolution in the religious history of humankind, what is called nowadays Abrahamic monotheism.

It was this biblical silence that led to the midrashic tradition almost all of us learned as children, that Abraham broke the idols in his father’s house. This is Abraham the Revolutionary, the iconoclast, the man of new beginnings who overturned everything his father stood for. This is, if you like, Freud’s Abraham.

Perhaps it is only as we grow older that we are able to go back and read the story again, and realise the significance of the passage at the end of the previous parsha. It says this:

Terach took his son Avram, and his grandson Lot, son of Haran, and his daughter-in-law Sarai, his son Avram’s wife, and together they set out from Ur Kasdim to go to the land of Canaan. But when they arrived at Harran, they settled there.

It turns out, in other words, that Abraham left his father’s house long after he had left his land and his birthplace. His birthplace was in Ur, in what is today southern Iraq, but he only separated from his father in Harran, in what is now northern Syria. Terach, Abraham’s father, accompanied him for the first half of his journey. He went with his son, at least part of the way.

What actually happened? There are two possibilities. The first is that Abraham received his call in Ur. His father Terach then agreed to go with him, intending to accompany him to the land of Canaan, though he did not complete the journey, perhaps because of age. The second is that the call came to Abraham in Harran, in which case his father had already begun the journey on his own initiative by leaving Ur. Either way, the break between Abraham and his father was far less dramatic than we first thought.

I have argued elsewhere[2] that biblical narrative is far more subtle than we usually take it to be. It is deliberately written to be understood at different levels at different stages in our moral growth. There is a surface narrative. But there is also, often, a deeper story that we only come to notice and understand when we have reached a certain level of maturity (I call this the concealed counter-narrative). Genesis 11-12 is a classic example.

When we are young we hear the enchanting – indeed empowering – story of Abraham breaking his father’s idols, with its message that a child can sometimes be right and a parent wrong, especially when it comes to spirituality and faith. Only much later in life do we hear the far deeper truth – hidden in the guise of a simple genealogy at the end of the previous parsha – that Abraham was actually completing a journey his father began.

There is a line in the book of Joshua – we read it as part of the Haggadah on Seder night – that says:

In the past your ancestors lived beyond the Euphrates River, including Terach the father of Avraham and Nahor. They worshiped other gods.

So there was idolatry in Abraham’s family background. But Genesis 11 says that it was Terach who took Abraham from Ur – not Abraham who took Terach – to go to the land of Canaan. There was no immediate and radical break between father and son.

Indeed it is hard to imagine how it could have been otherwise. Avram – Abraham’s original name – means “mighty father”. Abraham himself was chosen “so that he may direct his children and his household after him to keep the way of the Lord by doing what is right and just…” (Gen. 18:19) – that is, he was chosen to be a model parent. How could a child who rejected the way of his father become a father of children who would not reject his way in turn?[3] It makes more sense to say that Terach already had doubts about idolatry and it was he who inspired Abraham to go further, spiritually and physically. Abraham continued a journey his father had begun, thereby helping Isaac and Jacob, his son and grandson, to chart their own ways of serving God – the same God but encountered in different ways.

Which brings us back to Mark Twain. Often we begin by thinking how different we are from our parents. It takes time for us to appreciate how much they helped us become the people we are. Even when we thought we were running away, we were in fact continuing their journey. Much of what we are is because of what they were.

[3] Rashi (to Gen. 11:31) says it was to conceal the break between son and father that the Torah records the death of Terach before God’s call to Abraham. However, see Ramban ad loc.