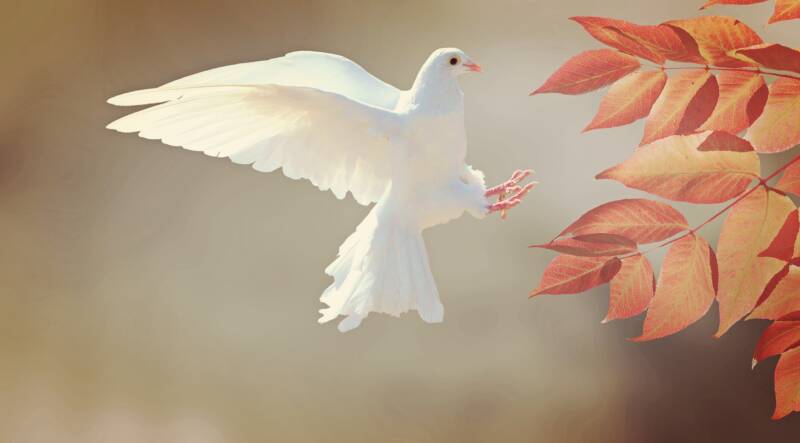 Noah is one of the most tantalising figures in the Torah, and nowhere is this more evident than in the first and last glimpses we catch of him in the sedra that bears his name. The opening is full of expectation:

“Noah was a righteous man, faultless in his generation. Noah walked with God.”

No one else in the Torah receives such accolades: not Abraham, Isaac or Jacob, not Joseph or Moses or Joshua. Yet the last scene of his life is full of pathos:

“Noah began to be a man of the soil, and he planted a vineyard. When he drank some of its wine, he became drunk and lay uncovered in his tent. Ham, the father of Canaan, saw his father’s nakedness and told his two brothers outside. But Shem and Japheth took a garment and laid it across their shoulders; then they walked in backwards and covered their father’s nakedness. Their faces were turned the other way so that they would not see their father’s nakedness.”

The decorousness of Shem and Japheth’s behaviour cannot hide from us the embarrassment they felt at knowing that their father – the sole human being worthy of rescue during the Flood – had become a drunkard. How had a man so great fallen so low? That is the question to which the Sages of the Midrash sought an answer. There are many comments, but one is surpassing in its sharpness:

Once the waters had abated, Noah should have left the Ark. However, Noah said to himself, “I entered with God’s permission, as it says, ‘Go into the Ark’ (Gen. 7:1). Shall I now leave without permission? The Holy One, blessed be He, said to him, ‘Is it permission, then, that you are seeking? Very well, then, here is permission,’ as it is said [Then God said to Noah,] ‘Come out of the Ark.'”

Rabbi Yehudah bar Ilai said: If I had been there I would have broken down the Ark and taken myself out. (Tanhuma, Buber, Noach, 13-14)

To understand this Midrash one has to read the story of the Flood carefully, with an ear to the pace of the narrative. The story begins rapidly. God announces the imminent destruction of life on earth. He orders Noah to build an Ark, specifying its precise measurements. Details follow as to what he must bring with him – his family, two (or in the case of pure animals, seven) of all the species of life, and provisions. The rain comes; the Earth is flooded; Noah and those with him are the sole survivors. The rain ceases and the water abates.

We expect to read next that Noah emerges. Instead the narrative slows down and for fourteen verses almost nothing happens. The water recedes. The Ark comes to rest. Noah opens a window and sends out a raven. Then he sends out a dove. He waits seven days and sends it out again. It returns with an olive leaf. Another seven days pass. He sends the dove a third time. This time it does not return, but Noah still does not step out onto dry land. Eventually God Himself says, ‘Come out of the Ark.’ Only then does Noah do so. The Midrash is quite unmistakable in its note of exasperation. When it comes to rebuilding a shattered world, you do not wait for permission.

What does Noah say to God when the decree is issued that the world is about to perish? What does he say when he is told to make an Ark to save himself and his family? What does he say as the rain begins to fall? The answer is: nothing. During the whole sequence of events, Noah is not reported as saying a single word. Instead we read, four times, of his silent obedience: “Noah did everything just as God had commanded him” (Gen. 6:22). “And Noah did all that the Lord had commanded him” (Gen. 7:5). He brought pairs of animals into the Ark “as God had commanded Noah” (Gen. 7:9, 16). Noah is the paradigm of biblical obedience. He does as he is commanded. What his story tells us is that obedience is not enough.

This is an extraordinary phenomenon. It is reasonable to assume that in the life of faith, obedience is the highest virtue. In Judaism it is not. One of the strangest features of biblical Hebrew is that – despite the fact that the Torah contains 613 commands – there is no word for ‘obey.’ Instead the verb the Torah uses is shema/lishmoa, ‘to listen, hear, attend, understand, internalise, respond.’ So distinctive is this word that, in effect, the King James Bible had to invent an English equivalent, the word ‘hearken.’ Nowadays the word has gone out of circulation, and there is no precise translation. Equally, modern Hebrew had to invent a word to mean pure, unquestioning obedience. It chose letzayet – not lishmo’a which means something else, reflective response. In Judaism, God does not command blind obedience. Ein haKadosh Baruch Hu ba be-tirunyiah im beriyotav; ‘God does not deal despotically with His creatures’ (Avodah Zarah 3a). If He sought no more than mindless submission to the Divine will, He would have created robots, machines, or genetically programmed people who responded automatically to commands as dogs to Pavlov’s bell. God wants us to be mature, deliberative, to do His will because we understand or because we trust Him when we do not understand. He seeks from us something other and greater than obedience, namely responsibility.

Intuitively, the Sages understood that the hero of faith was not Noah but Abraham – Abraham who fought a war to rescue his nephew, who prayed for the people of the plain even though he knew they were wicked; Abraham who challenged heaven itself in words unrivalled in the history of the human encounter with God: “Shall the judge of all the earth not do justice?”

What might an Abraham not have said when confronted with the possibility of a flood. “What of there are fifty righteous people? What if there are ten? Far be it from You to do such a thing – to kill the righteous with the wicked, treating the righteous and the wicked alike.” Abraham might have saved the world. Noah saved only himself and his family. Abraham might have failed, but Noah – at least on the evidence of the text – did not even try (to be sure, there are midrashic traditions that he did try, but most prefer to accept that he did not). Noah’s end – drunk, dishevelled, an embarrassment to his children – eloquently tells us that if you save yourself while doing nothing to save the world, you do not even save yourself. Noah could not live with the guilt of survival.

The difference between Noah and Abraham is eloquently summarised by the midrashic comment of Rabbi Yehudah:

“Noah walked with God.” The meaning of this phrase can be understood by a parable. A king had two sons, one grown up, the other a child. To the child, he said: Walk with me. But to the adult son he said: Walk before me. So it was that to Abraham, God said: “Because you are wholehearted, walk before Me” (Bereishit 17:1). But of Noah, the Torah says that he “walked with God.”

It takes courage to rebuild a shattered world. That was the courage shown by those who built and fought for the State of Israel in the years after the Holocaust. It was the same kind of courage that led the handful of survivors from the East European yeshivot and Hassidic groups, to reconstruct their devastated worlds of learning and piety in Israel, the United States and elsewhere. They were different kinds of people but they shared that intuitive knowledge that Noah lacked: that when it comes to rebuilding the ruins of catastrophe, you do not wait for permission. You take the risk and walk ahead.

Faith is more than obedience. It is the courage to create.