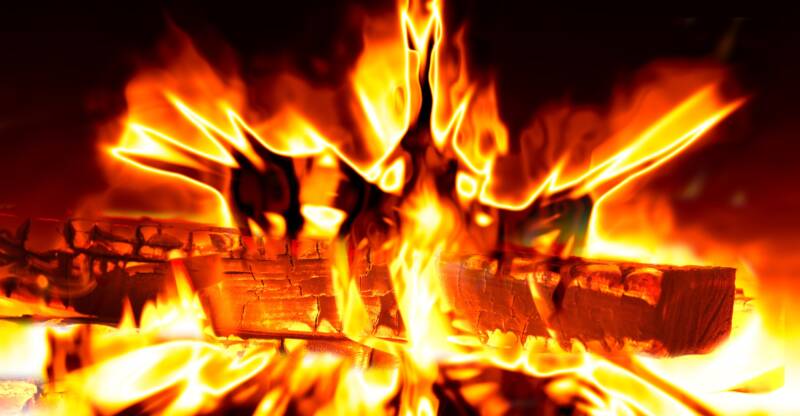 The shock is immense. For several weeks and many chapters – the longest prelude in the Torah – we have read of the preparations for the moment at which God would bring His Presence to rest in the midst of the people. Five parshiyot (Terumah, Tetzaveh, Ki Tissa, Vayakhel and Pekudei) describe the instructions for building the Sanctuary. Two further parshiyot (Vayikra, Tzav) detail the sacrificial offerings to be brought there. All is now ready. For seven days the Priests (Aaron and his sons) have been consecrated into office. Now comes the eighth day when the service of the Mishkan will begin.

The entire people have played their part in constructing what will become the visible home of the Divine Presence on Earth. With a simple, moving verse the drama reaches its climax:

Moses and Aaron went into the Tent of Meeting and when they came out, they blessed the people. God’s glory was then revealed to all the people.

Just as we think the narrative has reached closure, a terrifying scene takes place:

Aaron’s sons, Nadav and Avihu, took their censers, put fire into them and added incense; and they offered unauthorised fire before God, which He had not instructed them to offer. Fire came forth from before God, and it consumed them so that they died before God. Moses then said to Aaron: “This is what God spoke of when He said: Among those who approach Me, I will show Myself holy; in the sight of all the people I will be honoured.”

Celebration turned to tragedy with the death of Aaron’s two eldest sons. The Sages and commentators offer many explanations. Nadav and Avihu died because: they entered the Holy of Holies;[1] they were not wearing the requisite clothes;[2] they took fire from the kitchen, not the Altar;[3] they did not consult Moses and Aaron;[4] nor did they consult one another.[5] According to some they were guilty of hubris. They were impatient to assume leadership roles themselves;[6] and they did not marry, considering themselves above such things.[7] Yet others see their deaths as delayed punishment for an earlier sin, when, at Mount Sinai they “ate and drank” in the Presence of God (Ex. 24:9-11).

These interpretations represent close readings of the four places in the Torah which Nadav and Avihu’s death is mentioned (Lev. 10:2, Lev. 16:1, Num. 3:4, Num. 26:61), as well as the reference to their presence on Mount Sinai. Each is a profound meditation on the dangers of over-enthusiasm in the religious life. However, the simplest explanation is the one explicit in the Torah itself. Nadav and Avihu died because they offered unauthorised, literally “strange,” fire, meaning “that which was not commanded.” To understand the significance of this, we must go back to first principles and remind ourselves of the meaning of kadosh, “holy”, and thus of the Mikdash as the home of the holy.

The holy is that segment of time and space God has reserved for His Presence. Creation involves concealment. The word olam, “universe”, is semantically linked to the word ne’elam, “hidden”. To give humankind some of His own creative powers – the use of language to think, communicate, understand, imagine alternative futures and choose between them – God must do more than create Homo sapiens. He must efface Himself (what the Kabbalists called tzimtzum) to create space for human action. No single act more profoundly indicates the love and generosity implicit in creation. God as we encounter Him in the Torah is like a parent who knows they must hold back, let go, refrain from intervening, if their children are to become responsible and mature.

But there is a limit. To efface Himself entirely would be equivalent to abandoning the world, deserting His own children. That, God may not and will not do. How then does God leave a trace of His Presence on Earth?

The biblical answer is not philosophical. A philosophical answer (I am thinking here of the mainstream of Western philosophy, beginning in antiquity with Plato, in modernity with Descartes) would be one that applies universally – i.e., at all times, in all places. But there is no answer that applies to all times and places. That is why philosophy cannot and never will understand the apparent contradiction between Divine creation and human freewill, or between Divine Presence and the empirical world in which we reflect, choose and act.

Jewish thought is counter-philosophical. It insists that truths are embodied precisely in particular times and places. There are holy times (the seventh day, seventh month, seventh year, and the end of seven septennial cycles, the jubilee). There are holy people (the Children of Israel as a whole; within them, the Levi’im, and within them the Kohanim). And there is holy space (eventually, Israel; within that, Jerusalem; within that the Temple; in the desert, they were the Mishkan, the Holy, and the Holy of Holies).

The holy is that point of time and space in which the Presence of God is encountered by tzimtzum – self-renunciation – on the part of mankind. Just as God makes space for man by an act of self-limitation, so man makes space for God by an act of self-limitation. The holy is where God is experienced as absolute Presence. Not accidentally but essentially, this can only take place through the total renunciation of human will and initiative. That is not because God does not value human will and initiative. To the contrary: God has empowered mankind to use them to become His “partners in the work of creation”.

However, to be true to God’s purposes, there must be times and places at which humanity experiences the reality of the Divine. Those times and places require absolute obedience. The most fundamental mistake – the mistake of Nadav and Avihu – is to take the powers that belong to man’s encounter with the world, and apply them to man’s encounter with the Divine. Had Nadav and Avihu used their own initiative to fight evil and injustice they would have been heroes. Because they used their own initiative in the arena of the holy, they erred. They asserted their own presence in the absolute Presence of God. That is a contradiction in terms. That is why they died.

We err if we think of God as capricious, jealous, angry: a myth spread by early Christianity in an attempt to define itself as the religion of love, superseding the cruel/harsh/retributive God of the “Old Testament”. When the Torah itself uses such language it “speaks in the language of humanity” (Brachot 31a) – that is to say, in terms people will understand.

In truth, Tanach is a love story through and through – the passionate love of the Creator for His creatures that survives all the disappointments and betrayals of human history. God needs us to encounter Him, not because He needs mankind but because we need Him. If civilisation is to be guided by love, justice, and respect for the integrity of creation, there must be moments in which we leave the “I” behind and encounter the fullness of being in all its glory.

That is the function of the holy – the point at which “I am” is silent in the overwhelming presence of “There is”. That is what Nadav and Avihu forgot – that to enter holy space or time requires ontological humility, the total renunciation of human initiative and desire.

The significance of this fact cannot be over-estimated. When we confuse God’s will with our will, we turn the holy – the source of life – into something unholy and a source of death. The classic example of this is “holy war,” jihad, crusade – investing imperialism (the desire to rule over other people) with the cloak of sanctity as if conquest and forced conversion were God’s will.

The story of Nadav and Avihu reminds us yet again of the warning first spelled out in the days of Cain and Abel. The first act of worship led to the first murder. Like nuclear fission, worship generates power, which can be benign but can also be profoundly dangerous.

The episode of Nadav and Avihu is written in three kinds of fire. First there is the fire from Heaven:

Fire came forth from before God and consumed the burnt offering.

This was the fire of favour, consummating the service of the Sanctuary. Then came the “unauthorised fire” offered by the two sons.

Aaron’s sons, Nadav and Avihu took their censers, put fire in them and added incense; and they offered unauthorised fire before God, which He had not instructed them [to offer].

Then there was the counter-fire from Heaven:

Fire came forth from before God, and it consumed them so that they died before God.

The message is simple and intensely serious: Religion is not what the European Enlightenment thought it would become: mute, marginal and mild. It is fire – and like fire, it warms but it also burns. And we are the guardians of the flame.