The Weighing of the Heart 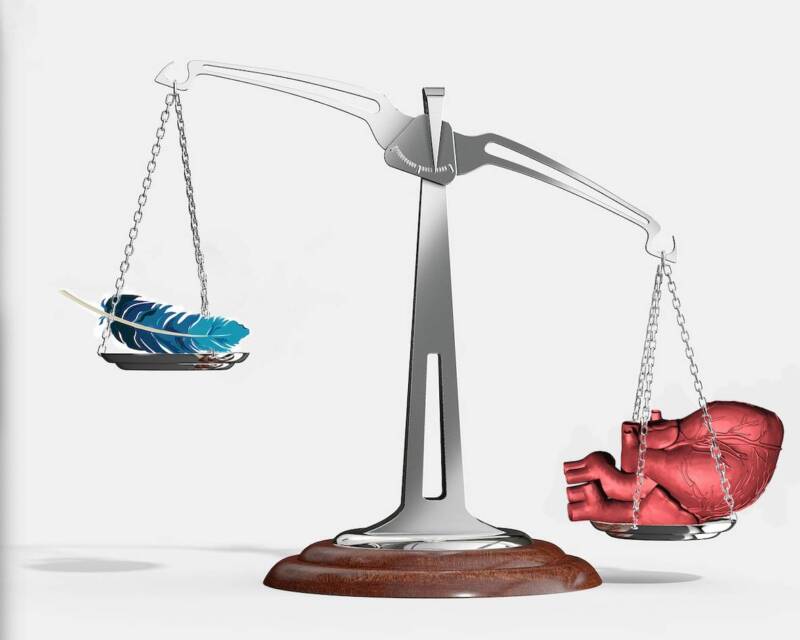 The Weighing of the Heart

In this week’s parsha, before even the first plague has struck Egypt, God tells Moses: “I will harden Pharaoh’s heart and multiply My miraculous signs and wonders in Egypt.” (Exodus 7:3)

The hardening of Pharaoh’s heart is referred to no less than twenty times in the course of the story of the Exodus. Sometimes it is Pharaoh who is said to harden his heart. At other times, God is said to have done so. The Torah uses three different verbs in this context: ch-z-k, to strengthen, k-sh-h, to harden, and k-b-d, to make heavy.

Throughout the ages, the commentators have been concerned with one problem. If God hardened Pharaoh’s heart, how could he have been to blame for not letting the Israelites go? He had no choice in the matter. It was God’s doing, not his. That he and his people should be punished seems to flout the fundamental principle of justice, that we are guilty only for what we have freely chosen to do.

However, the commentators noted that for the first five plagues, Pharaoh is said to harden his own heart. The obstinacy, the refusal, the intransigence are his. Only with the sixth plague is God said to have done so. This led to several explanations.

Rashi says that the hardening of Pharaoh’s heart in the last five plagues was a punishment for the first five, when it was Pharaoh’s own obstinacy that led him to refuse to let the people go.[1] Maimonides interprets God’s hardening of Pharaoh’s heart as meaning that “repentance was withheld from him, and the liberty to turn from his wickedness was not accorded to him.”[2] Albo and Sforno offer the opposite interpretation. God hardened Pharaoh’s heart precisely to restore his free will. After the succession of plagues that had devastated the land, Pharaoh was under overwhelming pressure to let the Israelites go. Had he done so, it would not have been out of free choice, but rather under force majeure. God therefore strengthened Pharaoh’s heart so that even after the first five plagues he was genuinely free to say Yes or No.[3]

It may be that all three are right and are simply responding to the different verbs. K-sh-h, “hardening,” supports Rashi’s reading. Pharaoh was hard on the Israelites, so God was hard on him. K-b-d, “making heavy,” supports Maimonides. Pharaoh lacked the energy, the strength, to repent. Ch-z-k, “to strengthen,” supports Albo and Sforno. The text allows for all three possibilities.

However, part of the truth may lie in a completely different direction.[4] The Egyptians – Pharaohs especially – were preoccupied by death. Their funerary practices were astonishingly elaborate and were meant to prepare the person for life after death. The tombs of the Pharaohs were among their most lavish creations. Tutankhamun’s, discovered in 1922, is a dazzling example. One of the greatest literary works of ancient Egypt was The Book of the Dead.

The Torah notes the attention the Egyptians gave to death. At the end of Bereishit, we read of how the Egyptians accompanied Joseph and his family in the funeral procession to bury Jacob. The Canaanites witnessed this and said, “The Egyptians are holding a solemn ceremony of mourning.” They named the place, Abel Mizraim (Gen. 50:11). Note: they called it “the place of Egyptian mourning,” not Israelite mourning, despite the fact that it was for Jacob, a non-Egyptian. Then we read of how Joseph himself was embalmed and placed in a coffin in Egypt. In the Torah, only Joseph, and Jacob at Joseph’s request, are embalmed. So we have already been forewarned about the significance of death to the Egyptian mind.

However, there is one specific aspect of Egyptian belief that opens up an entirely new perspective on the references to Pharaoh’s heart. According to Egyptian myth, the deceased underwent a trial to establish their worthiness or otherwise to enjoy life after death in Aaru, the Field of Reeds, where souls live on in pleasure for eternity. They believed that the soul resides in the heart, and the trial consisted of the ceremony of The Weighing of the Heart. Other organs were removed after death, but the heart was left because it was needed for the trial.

On one side of the scales was a feather. On the other, was placed the heart. If the heart was as light as the feather, the dead could continue to Aaru, but if it was heavier, it was devoured by the goddess Ammit (a combination of lion, hippopotamus and crocodile), and its owner was condemned to live in Duat, the underworld. An illustration, on papyrus, in The Book of the Dead shows the ceremony, undertaken in the Hall of Two Truths, overseen by Anubis, the Egyptian God of the dead.

It follows that the root k-v-d, “to make heavy,” would have had a highly specific meaning for the Egyptians of that time. It would imply that Pharaoh’s heart had become heavier than a feather. He would fail the heart weighing ceremony and therefore be denied what was most important to him – the prospect of joining the gods in the afterlife.

No one would have been in any doubt as to why this was so. The feather represented Ma’at, the central Egyptian value that included the concepts of truth, balance, order, harmony, justice, morality, and law. Not only was this fundamental to Egyptian culture. It was the task of the Pharaoh to ensure that it prevailed. This had been an Egyptian principle since a thousand years before the Exodus, found in Pyramid texts dating from the third millennium BCE. Ma’at meant cosmic order. Its absence invited chaos. A Pharaoh whose heart had become heavier than the Ma’at feather was not only endangering his own afterlife, but threatening the entire people over whom he ruled with turmoil and disarray.

One of the things the deceased were supposed to do as part of the trial was to make a series of negative confessions, 42 in all, declaring themselves innocent of the kind of sin that would exclude them from paradise.

These are some of them:

If the “heavying” of Pharaoh’s heart is an allusion to the Weighing of the Heart ceremony, it allows us to read the story in a completely new way.

First, it suggests that it is directed to Egyptians as well as Israelites; to humanity as a whole. The Torah tells us three times that the purpose of the signs and wonders was “so that the Egyptians may know that I am the Lord” (Ex. 7:5; 14:4; 14:18). This is the core of monotheism. It is not that the Israelites have their God, and the Egyptians their pantheon, but rather that there is one sovereign power in the universe.

The religion of Israel is not intended to be the religion of all humanity. Nowhere in the narrative does God imply that He wants the Egyptians to adopt Israelite religious practices. The point is quite different. Religion is particular. Morality is universal. If the story of the “heavying” of Pharaoh’s heart does allude to the Book of the Dead, then the story of the Exodus is not simply a partisan account from an Israelite point of view. It is telling us that certain things are wrong, whoever does them and whoever they are done against. They are wrong by Egyptian standards too. That was true of Pharaoh’s decision to kill all male Israelite children. That was an unforgivable sin against Ma’at.

Finally, and most deeply, the Torah is hinting at a self-contradiction at the heart of the Egyptian concept of Ma’at. The most generous interpretation of Pharaoh’s refusal to let the people go is that he was charged with maintaining order in the Empire. A successful minority like the Israelites could be seen as a threat to such order. If they stayed and thrived, they might take over the country as the Hyksos had done several centuries earlier. If they were allowed to leave, other enslaved groups might be tempted to do likewise. Emigration is a bad sign when the place people are trying to leave is a superpower. That is why, for many years, the Soviet Union forbade Jews to leave the country.

Pharaoh, in his repeated refusal to let the people go, doubtless justified his decision in each case on the grounds that he was securing Ma’at, order. Meanwhile however, with each plague the country was reduced to ever greater chaos. That is because oppressing people, which is what Pharaoh was doing, was a fundamental offence against Ma’at.

On this reading, the whole issue of Pharaoh hardening his heart was not so much psychological as political. In his position as semi-divine head of state of an empire that practised forced labour on a massive scale, Pharaoh could not let the Israelites go free without creating the risk that other groups would also challenge the Corvée, the unpaid, conscripted semi-slave labour that was part of Egyptian society from the building of the pyramids and abolished only in 1882.

For the first five plagues, Pharaoh could tell himself that he was enduring minor inconvenience to protect a major principle. But as the plagues became more serious, reducing Egypt to chaos, Pharaoh’s room for manoeuvre grew ever less. Having five times said “No” to the Israelites, he could not now back down without making himself look ridiculous, forfeiting his authority and damaging his standing. Pharaoh was a prisoner of his own system, held captive by his own decisions.

Seeking to protect order, he created chaos. That is because the order he was seeking to protect was built on a foundation of injustice: the enslavement of the many for the benefit of the few. The more he tried to defend it, the heavier his heart grew.

I believe that justice is universal. The Exodus story of how the supreme Power entered history to liberate the supremely powerless, is not just for Jews. It is the world’s greatest metanarrative of hope.

[1] Rashi to Exodus 7:3.
[2] Mishneh Torah, Hilchot Teshuva 6:3
[3] Albo, Ikkarim, 4:25; Sforno to Exodus 7:3.
[4] My thanks to Rabbi Dr Rafi Zarum for suggesting this line of thought.
[5] Negative confessions are rare in Judaism, but one exists: Vidui Bikkurim, the confession to be made over first-fruits: “I have not turned aside from Your commands nor have I forgotten any of them …I have obeyed the Lord my God; I have done everything You commanded me” (Deut. 26:13-14).