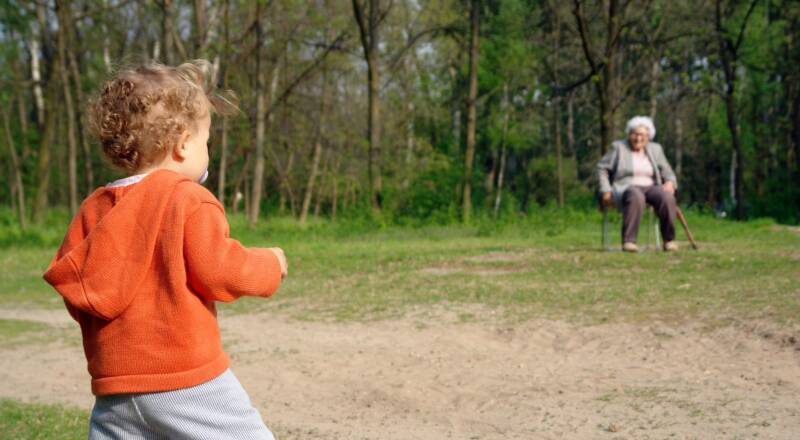 The drama of younger and older brothers, which haunts the book of Bereishit from Cain and Abel onwards, reaches a strange climax in the story of Joseph’s children. Jacob/Israel is nearing the end of his life. Joseph visits him, bringing with him his two sons, Manasseh and Ephraim. It is the only scene of grandfather and grandchildren in the book. Jacob asks Joseph to bring them near so that he can bless them. What follows next is described in painstaking detail:

Joseph took them both, Ephraim in his right hand toward Israel’s left, and Manasseh in his left hand towards Israel’s right, and brought them near him. But Israel reached out his right hand and put it on Ephraim’s head, though he was the younger, and crossing his arms, he put his left hand on Manasseh’s head, even though Manasseh was the firstborn. . . . . When Joseph saw his father placing his right hand on Ephraim’s head he was displeased; so he took hold of his father’s hand to move it from Ephraim’s head to Manasseh’s head. Joseph said to him, “No, my father, this one is the firstborn; put your right hand on his head.” But his father refused and said, “I know, my son, I know. He too will become a people, and he too will become great. Nevertheless, his younger brother will be greater than he, and his descendants will become a group of nations.” He blessed them that day, saying: “In your name will Israel pronounce this blessing: ‘May God make you like Ephraim and Manasseh.’” So he put Ephraim ahead of Manasseh.

It is not difficult to understand the care Joseph took to ensure that Jacob would bless the firstborn first. Three times his father had set the younger before the elder, and each time it had resulted in tragedy. He, the younger, had sought to supplant his elder brother Esau. He favoured the younger sister Rachel over Leah. And he favoured the youngest of his children, Joseph and Benjamin, over the elder Reuben, Shimon and Levi. The consequences were catastrophic: estrangement from Esau, tension between the two sisters, and hostility among his sons. Joseph himself bore the scars: thrown into a well by his brothers, who initially planned to kill him and eventually sold him into Egypt as a slave. Had his father not learned? Or did he think that Ephraim – whom Joseph held in his right hand – was the elder? Did Jacob know what he was doing? Did he not realise that he was risking extending the family feuds into the next generation? Besides which, what possible reason could he have for favouring the younger of his grandchildren over the elder? He had not seen them before. He knew nothing about them. None of the factors that led to the earlier episodes were operative here. Why did Jacob favour Ephraim over Manasseh?

Jacob knew two things, and it is here that the explanation lies. He knew that the stay of his family in Egypt would not be a short one. Before leaving Canaan to see Joseph, God had appeared to him in a vision:

Do not be afraid to go down to Egypt, for I will make you into a great nation there. I will go down to Egypt with you, and I will surely bring you back again. And Joseph’s own hand will close your eyes.

This was, in other words, the start of the long exile which God had told Abraham would be the fate of his children (a vision the Torah describes as accompanied by “a deep and dreadful darkness” – Gen. 15:12). The other thing Jacob knew was his grandsons’ names, Manasseh and Ephraim. The combination of these two facts was enough.

When Joseph finally emerged from prison to become Prime Minister of Egypt, he married and had two sons. This is how the Torah describes their birth:

With the utmost brevity the Torah intimates an experience of exile that was to be repeated many times across the centuries. At first, Joseph felt relief. The years as a slave, then a prisoner, were over. He had risen to greatness. In Canaan, he had been the youngest of eleven brothers in a nomadic family of shepherds. Now, in Egypt, he was at the centre of the greatest civilization of the ancient world, second only to Pharaoh in rank and power. No one reminded him of his background. With his royal robes and ring and chariot, he was an Egyptian prince (as Moses was later to be). The past was a bitter memory he sought to remove from his mind. Manasseh means “forgetting.”

But as time passed, Joseph began to feel quite different emotions. Yes, he had arrived. But this people was not his; nor was its culture. To be sure, his family was, in any worldly terms, undistinguished, unsophisticated. Yet they remained his family. They were the matrix of who he was. Though they were no more than shepherds (a class the Egyptians despised), they had been spoken to by God – not the gods of the sun, the river and death, the Egyptian pantheon – but God, the creator of heaven and earth, who did not make His home in temples and pyramids and panoplies of power, but who spoke in the human heart as a voice, lifting a simple family to moral greatness. By the time his second son was born, Joseph had undergone a profound change of heart. To be sure, he had all the trappings of earthly success – “God has made me fruitful” – but Egypt had become “the land of my affliction.” Why? Because it was exile. There is a sociological observation about immigrant groups, known as Hansen’s Law: “The second generation seeks to remember what the first generation sought to forget.” Joseph went through this transformation very quickly. It was already complete by the time his second son was born. By calling him Ephraim, he was remembering what, when Manasseh was born, he was trying to forget: who he was, where he came from, where he belonged.

Jacob’s blessing of Ephraim over Manasseh had nothing to do with their ages and everything to do with their names. Knowing that these were the first two children of his family to be born in exile, knowing too that the exile would be prolonged and at times difficult and dark, Jacob sought to signal to all future generations that there would be a constant tension between the desire to forget (to assimilate, acculturate, anaesthetise the hope of a return) and the promptings of memory (the knowledge that this is “exile,” that we are part of another story, that ultimate home is somewhere else). The child of forgetting (Manasseh) may have blessings. But greater are the blessings of a child (Ephraim) who remembers the past and future of which he is a part.