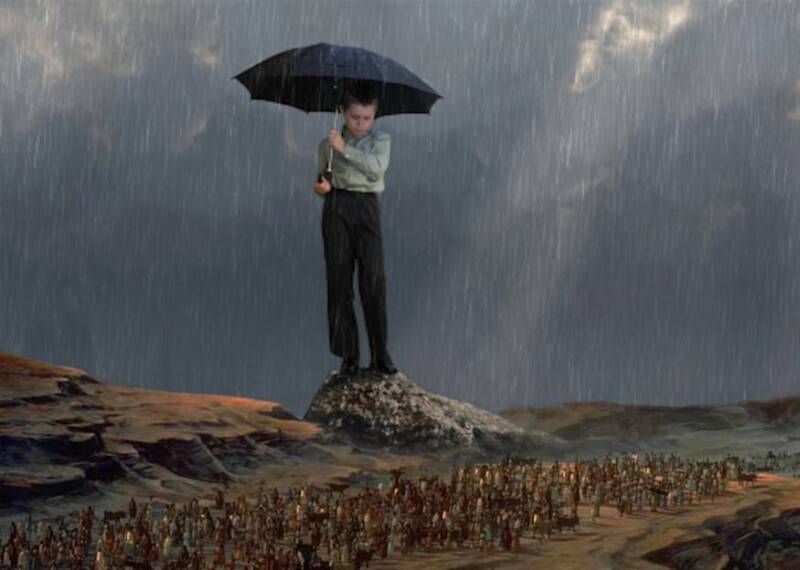 The events narrated in this week’s parsha – Jacob’s flight to Laban, his stay there, and his escape, pursued by his father-in-law – gave rise to the strangest passage in the Haggadah. Commenting on Deuteronomy 26:5, the passage we expound on Seder night, it says as follows:

Arami oved avi. Go and learn what Laban the Aramean sought to do to our father Jacob, for Pharaoh condemned only the boys to death, but Laban sought to uproot everything.

There are three problems with this text. First, it understands the words arami oved avi to mean, “[Laban] an Aramean [tried to] destroy my father.” But this cannot be the plain sense of the verse because, as Ibn Ezra points out, oved is an intransitive verb. It cannot take an object. It means “lost,” “wandering,” “fugitive,” “poor,” “homeless,” or “on the brink of perishing.” The phrase therefore means something like, “My father was a wandering Aramean.” The “father” referred to is either Jacob (Ibn Ezra, Sforno), or Abraham (Rashbam), or all the patriarchs (Shadal). As for the word Aram, this was the region from which Abraham set out to travel to Canaan, and to which Jacob fled to escape the anger of Esau. The general sense of the phrase is that the patriarchs had no land and no permanent home. They were vulnerable. They were nomads. As for Laban, he does not appear in the verse at all, except by a very forced reading.

Secondly, there is no evidence that Laban the Aramean actually harmed Jacob. To the contrary, as he was pursuing Jacob (but before he caught up with him) it is written: “God appeared to Laban the Aramean in a dream by night and said to him, ‘Beware of attempting anything with Jacob, good or bad’” (Gen. 31:24). Laban himself said to Jacob, “I have it in my power to do you harm; but the God of your father said to me last night, ‘Beware of attempting anything with Jacob, good or bad.’” So Laban did nothing to Jacob and his family. He may have wanted to, but in the end he did not. Pharaoh, by contrast, did not merely contemplate doing evil to the Israelites; he actually did so, killing every male child and enslaving the entire population.

Third, and most fundamental: the Seder night is dedicated to retelling the story of the Exodus. We are charged to remember it, engrave it on the hearts of our children, and “the more one tells of the coming out of Egypt, the more admirable it is.” Why then diminish the miracle by saying in effect: “Egypt? That was nothing compared to Laban!”

All this is very strange indeed. Let me suggest an explanation. We have here a phrase with two quite different meanings, depending on the context in which we read it.

Originally the text of arami oved avi had nothing to do with Pesach. It appears in the Torah as the text of the declaration to be said on bringing first-fruits to the Temple, which normally happened on Shavuot.

Then you shall declare before the Lord your God: “My father was a wandering Aramean, and he went down into Egypt… Then the Lord brought us out of Egypt with a mighty hand and an outstretched arm… He brought us to this place and gave us this land, a land flowing with milk and honey; and now I bring the first-fruits of the soil that You, Lord, have given me.”

In the context of first-fruits, the literal translation, “My father was a wandering Aramean,” makes eminent sense. The text is contrasting the past when the patriarchs were nomads, forced to wander from place to place, with the present when, thanks to God, the Israelites have a land of their own. The contrast is between homelessness and home. But that is specifically when we speak about first-fruits – the produce of the land.

At some stage, however, the passage was placed in another context, namely Pesach, the Seder and the story of the Exodus. The Mishnah specifies that it be read and expounded on Seder night.[1] Almost certainly the reason is that same (relatively rare) verb h-g-d, from which the word Haggadah is derived, occurs both in connection with telling the story of Pesach (Ex. 13:8), and making the first-fruits declaration (Deut. 26:3).

This created a significant problem. The passage does indeed deal with going down to Egypt, being persecuted there, and being brought out by God. But what is the connection between “My father was a wandering/fugitive Aramean” and the Exodus? The patriarchs and matriarchs lived a nomadic life. But that was not the reason they went down to Egypt. They did so because there was a famine in the land, and because Joseph was viceroy. It had nothing to do with wandering.

The Sages, however, understood something deep about the narratives of the patriarchs and matriarchs. They formulated the principle that ma’asei avot siman lebanim, “What happened to the fathers was a sign for the children.”[2] They saw that certain passages in Genesis could only be understood as a forerunner, a prefiguration, of later events.

The classic example occurs in Genesis 12 when, almost immediately after arriving in the land of Canaan, Abraham and Sarah were forced into exile in Egypt. Abraham’s life was at risk. Sarah was taken into Pharaoh’s harem. God then struck Pharaoh’s household with plagues, and Pharaoh sent them away. The parallels between this and the story of the Exodus are obvious.

Something similar happened to Abraham and Sarah later on in Gerar (Gen. 20), as it did, also in Gerar, to Isaac and Rebecca (Genesis 26). But did Jacob undergo his own prefiguration of the exodus? He did, late in life, go down to Egypt with his family. But this was not in anticipation of the Exodus. It was the Exodus itself.

Earlier, in our parsha, he had gone into exile, but this was not because of famine. It was out of fear for Esau. Nor was it to a land of strangers. He was travelling to his mother’s own family. Jacob seems to be the only one of the patriarchs not to live out, in advance, the experience of exile and exodus.

The Sages, however, realised otherwise. Living with Laban, he had lost his freedom. He had become, in effect, his father-in-law’s slave. Eventually he had to escape, without letting Laban know he was going. He knew that, if he could, Laban would keep him in his household as a kind of prisoner.

But where does Laban come into the phrase, arami oved avi, “A wandering Aramean was my father”? Answer: only Laban and Laban’s father Betuel are called Arami or ha-Arami in the whole Torah. Therefore Arami means “Laban.”

How do we know that he sought to do Jacob harm? Because God appeared to him at night and said “Beware of attempting anything with Jacob, good or bad.” God would not have warned Laban against doing anything to Jacob, had Laban not intended to do so. God does not warn us against doing something we were not about to do anyway. Besides which, the next day, Laban said to Jacob, “I have it in my power to do you harm.” That was a threat. It is clear that had God not warned him, he would indeed have done Jacob harm.

How can we read this into the verse? Because the root a-v-d, which means “lost, wandering,” might also, in the piel or hiphil grammatical tenses, mean, “to destroy.” Of course, Laban did not destroy “my father” or anyone else. But that was because of Divine intervention. Hence the phrase could be taken to mean, “[Laban] the Aramean [tried to] destroy my father.” This is how Rashi understands it.

What then are we to make of the phrase, “Pharaoh condemned only the boys to death, but Laban sought to uproot everything”? The answer is not that Laban sought to kill all the members of Jacob’s family. Quite the opposite. He said to Jacob: “The women are my daughters, the children are my children, and the flocks are my flocks. All you see is mine” (Gen. 31:43). Jacob had worked for some twenty years to earn his family and flocks. Yet Laban still claimed they were his own. Had God not intervened, he would have kept Jacob’s entire family as prisoners. That is how he “sought to uproot everything” by denying them all the chance to go free.

This interpretation of arami oved avi is not the plain sense. But the plain sense related this passage to the bringing first-fruits. It was the genius of the Sages to give it an interpretation that connected it with Pesach and the Exodus. And though it gives a far-fetched reading of the phrase, it gives a compelling interpretation to the entire narrative of Jacob in Laban’s house. It tells us that the third of the patriarchs, whose descent to Egypt would actually begin the story of the Exodus, had himself undergone an exodus experience in his youth.[3]

Ma’asei avot siman lebanim, “the act of the fathers are a sign to their children,” tells us that what is happening now has happened before. That does not mean that danger is to be treated lightly. But it does mean that we should never despair. Abraham, Isaac, Jacob and their wives experienced exile and exodus as if to say to their descendants, this is not unknown territory. God was with us then; He will be with you now.

I believe that we can face the future without fear because we have been here before and because we are not alone.

[1] Mishnah Pesachim 10:4.
[2] The principle does not appear explicitly in these terms in the classic Midrashic or Talmudic literature. A similar expression appears in Bereishit Rabbah 39:8. A key text is Ramban, Commentary to Gen. 12:6, 10. It was widely adopted by subsequent commentators.
[3] On this whole subject, see David Daube, The Exodus Pattern in the Bible, Faber, 1963.