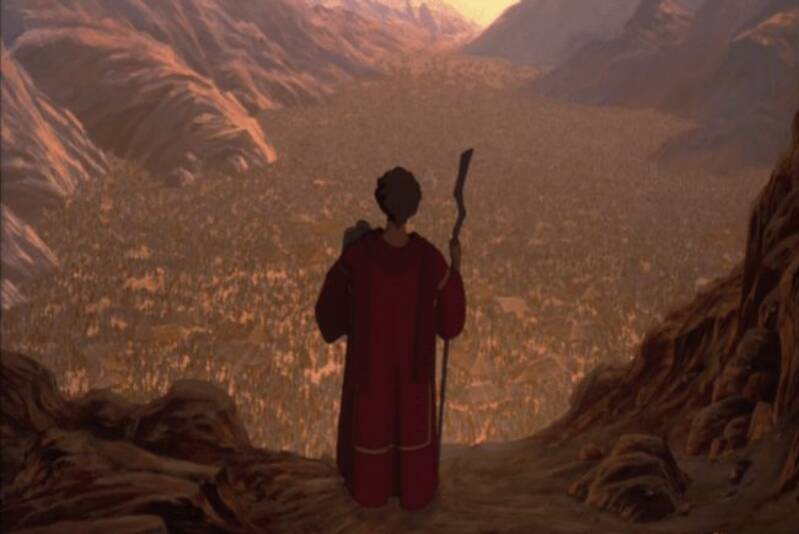 And so Moses dies, alone on a mountain with God as he had been all those years ago when, as a shepherd in Midian, he caught sight of a bush in flames and heard the Call that changed his life and the moral horizons of the world.

It is a scene affecting in its simplicity. There are no crowds. There is no weeping. The sense of closeness yet distance is almost overwhelming. He sees the land from afar but has known for some time that he will never reach it. Neither his wife nor his children are there to say goodbye; they disappeared from the narrative long before. His sister Miriam and his brother Aaron, with whom he shared the burdens of leadership for so long, have predeceased him. His disciple Joshua has become his successor. Moses has become the lonely man of faith, except that with God no person is lonely even if they are alone.

It is a profoundly sad moment, yet the obituary the Torah gives him – whether Joshua wrote it, or whether he wrote it himself at God’s behest with tears in his eyes[1] – is unsurpassed:

There has never arisen a prophet in Israel like Moses, whom the Lord knew face-to-face, in all the signs and wonders the Lord sent him to perform in Egypt against Pharaoh, all his officials, and all of his land, and in all the acts of a mighty hand and of terrifying power that Moses performed before the eyes of all Israel.

Moses rarely figures in the lists people make from time to time of the most influential people in history. He is harder to identify with than Abraham in his devotion, David in his charisma, or Isaiah in his symphonies of hope. The contrast between Abraham’s death and Moses’ death could not be more pointed. Of Abraham, the Torah says:

Then Abraham breathed his last and died in his ripe old age, aged and satisfied, and he was gathered to his people.

Abraham’s death was serene. Though he had been through many trials, he had lived to see the first fulfilment of the promises God had given him. He had a child, and he had acquired at least the first plot of land in Israel. In the long journey of his descendants, he had taken the first step. There is a sense of closure.

By contrast, Moses’ old age is anything but serene. In the last month of his life he challenges the people with undiminished vigour and unvarnished candour. At the very moment that they are getting ready to cross the Jordan and enter the land, Moses warns them of the challenges ahead. The greatest trial, he says, will not be poverty but affluence, not slavery but freedom, not homelessness in the desert but the comfort of home. Reading these words, one is reminded of Dylan Thomas’ poem, “Do not go gentle into that good night.” There is as much passion in his words in his hundred and twentieth year as at any earlier stage of his life. This is not a man ready to retire. Until the very end he continues to challenge both the people and God.

What do we learn from the life, and death, of Moses?

The greatest tribute the Torah gives Moses is to call him eved Hashem, the servant of God. That is why the Rambam writes that we can all be as great as Moses.[3] Because we can all serve. We are as great as the causes we serve, and when we serve with true humility, a Force greater than ourselves flows through us, bringing the Divine Presence into the world.