The Structure of the Good Society 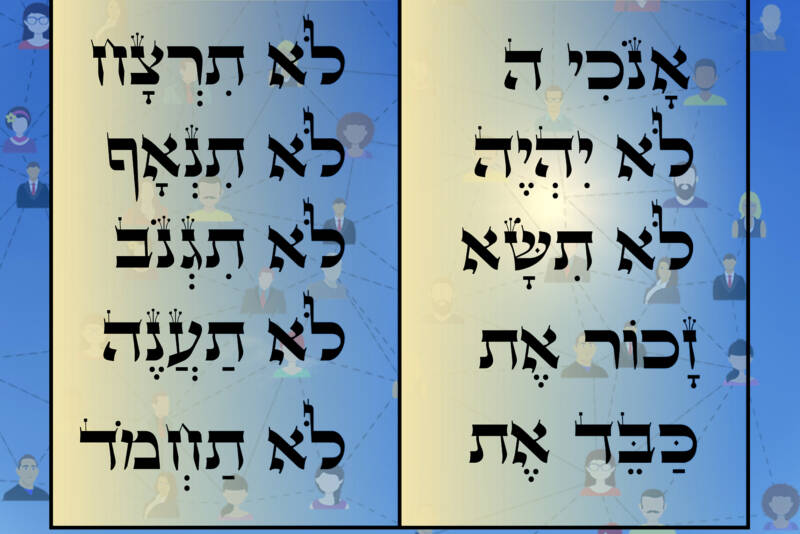 In the House of Lords there is a special chamber used as, among other things, the place where new Peers are robed before their introduction into the House. When my predecessor Lord Jakobovits was introduced, the official robing him commented that he was the first Rabbi to be honoured in the Upper House. Lord Jakobovits replied, “No, I am the second.” “Who was the first?” asked the surprised official. The chamber is known as the Moses Room because of the large painting that dominates the room. It shows Moses bringing the Ten Commandments down from Mount Sinai. Lord Jakobovits pointed to this mural, indicating that Moses was the first Rabbi to ever be honoured in the House of Lords.

The Ten Commandments that appear in this week’s parsha have long held a special place not only in Judaism but also within the broader configuration of values we call the Judeo-Christian ethic. In the United States they were often to be found adorning American law courts, though their presence has been challenged, in some states successfully, on the grounds that they breach the First Amendment and the separation of church and state. They remain the supreme expression of the higher law to which all human law is bound.

Within Judaism, too, they have always held a special place. In Second Temple times they were recited in the daily prayers as part of the Shema, which then had four paragraphs rather than three.[1] It was only when sectarians began to claim that only these and not the other 603 commands came directly from God that the recitation was brought to an end.[2]

The text retained its hold on the Jewish mind nonetheless. Even though it was removed from daily communal prayers, it was preserved in the prayer book as a private meditation to be said after the formal service has been concluded. In most congregations, people stand when they are read as part of the Torah reading, despite the fact that Maimonides explicitly ruled against it.[3]

Yet their uniqueness is not straightforward. As moral principles, they were mostly not new. Almost all societies have had laws against murder, robbery, and false testimony. There is some originality in the fact that they are apodictic, that is, simple statements of “You shall not,” as opposed to the casuistic form, “If … then.” But they are only ten among a much larger body of 613 commandments. Nor are they even described by the Torah itself as “Ten Commandments.” The Torah calls them the asseret ha-devarim, that is, “ten utterances.” Hence the Greek translation, Decalogue, meaning, “ten words.”

What makes them special is that they are simple and easy to memorise. That is because, in Judaism, law is not intended for judges alone. The covenant at Sinai, in keeping with the profound egalitarianism at the heart of the Torah, was made not as other covenants were in the ancient world between kings. The Sinai covenant was made by God with the entire people. Hence the need for a simple statement of basic principles that everyone can remember and recite.

More than this, they establish for all time the parameters – the corporate culture, we could almost call it – of Jewish existence. To understand how, it is worth reflecting on their basic structure. There was a fundamental disagreement between Maimonides and Nahmanides on the status of the first sentence: “I am the Lord your God, who brought you out of Egypt, out of the land of slavery.” Maimonides, in line with the Talmud, held that this is in itself a command: to believe in God. Nahmanides held that it was not a command at all. It was a prologue or preamble to the commands.[4] Modern research on ancient Near Eastern covenant formulae tends to support Nahmanides.

The other fundamental question is how to divide them. Most depictions of the Ten Commandments divide them into two, because of the “two tablets of stone”(Deut 4:13) on which they were engraved. Roughly speaking, the first five are about the relationship between humans and God, the second five about the relationship between humans themselves. There is, however, another way of thinking about numerical structures in the Torah.

The seven days of Creation, for example, are structured as two sets of three, followed by an all-embracing seventh. During the first three days God separated domains: light and dark, upper and lower waters, and sea and dry land. During the second three days He filled each with the appropriate objects and life forms: sun and moon, birds and fish, animals and man. The seventh day was set apart from the others as holy.

Likewise the Ten Plagues consist of three cycles of three followed by a stand-alone tenth. In each cycle of three, the first two were forewarned while the third struck without warning. In the first of each series, Pharaoh was warned in the morning (Ex. 7:16; Ex. 8:17; Ex. 9:13), in the second Moses was told to “come in before Pharaoh” (Ex. 7:26; Ex. 9:1; Ex. 10:1) in the palace, and so on. The tenth plague, unlike the rest, was announced at the very outset (Ex. 4:23). It was less a plague than it was a punishment.

Similarly, it seems to me that the Ten Commandments are structured as three groups of three, with a tenth that is set apart from the rest. Thus understood, we can see how they form the basic structure, the depth grammar, of Israel as a society bound by covenant to God as “a kingdom of priests and a holy nation.” (Ex. 19:6)

The first three – no other gods, no graven images, and no taking of God’s name in vain – define the Jewish people as “one nation under God.” God is our ultimate Sovereign. Therefore all other earthly rule is subject to the overarching imperatives linking Israel to God. Divine sovereignty transcends all other loyalties (no other gods besides Me). God is a living force, not an abstract power (no graven images). And sovereignty presupposes reverence (Do not take My Name in vain).

The first three commands, through which the people declare their obedience and loyalty to God above all else, establish the single most important principle of a free society, namely the moral limits of power. Without this, the danger even in democracy is the tyranny of the majority, against which the best defence is the sovereignty of God.

The second three commands – the Sabbath, honouring parents, and the prohibition of murder – are all about the principle of the createdness of life. They establish limits to the idea of autonomy, namely that we are free to do whatever we like so long as it does not harm others. Shabbat is the day dedicated to seeing God as Creator and the universe as His creation. Hence, one day in seven, all human hierarchies are suspended and everyone, master, slave, employer, employee, even domestic animals, are free.

Honouring parents acknowledges our human createdness. It tells us that not everything that matters is the result of our choice, chief of which is the fact that we exist at all. Other people’s choices matter, not just our own. “Thou shall not murder” restates the central principle of the universal Noahide Covenant that murder is not just a crime against man but a sin against God in whose image we are. So commands 4 to 7 form the basic jurisprudential principles of Jewish life. They tell us to remember where we came from if we are to be mindful of how to live.

The third three – against adultery, theft and bearing false witness – establish the basic institutions on which society depends. Marriage is sacred because it is the human bond closest in approximation to the covenant between us and God. Not only is marriage the human institution par excellence that depends on loyalty and fidelity. It is also the matrix of a free society. Alexis de Tocqueville put it best:

“As long as family feeling is kept alive, the opponent of oppression is never alone.”

The prohibition against theft establishes the integrity of property. Whereas Jefferson defined as inalienable rights those of “life, liberty, and the pursuit of happiness,” John Locke, closer in spirit to the Hebrew Bible, saw them as “life, liberty or possession.”[5] Tyrants abuse the property rights of the people, and the assault of slavery against human dignity is that it deprives me of the ownership of the wealth I create.

The prohibition of false testimony is the precondition of justice. A just society needs more than a structure of laws, courts and enforcement agencies. As Judge Learned Hand said, “Liberty lies in the hearts of men and women; when it dies there, no constitution, no law, no court can save it; no constitution, no law, no court can even do much to help it.”[6] There is no freedom without justice, but there is no justice without each of us accepting individual and collective responsibility for “telling the truth, the whole truth, and nothing but the truth.”

Finally comes the stand-alone prohibition against envying your neighbour’s house, spouse, slave, maid, ox, donkey, or anything else belonging to your neighbour. This seems odd if we think of the “ten words” as commands, but not if we think of them as the basic principles of a free society. The greatest challenge of any society is how to contain the universal, inevitable phenomenon of envy: the desire to have what belongs to someone else. Envy lies at the heart of violence.[7] It was envy that led Cain to murder Abel, made Abraham and Isaac fear for their life because they were married to beautiful women, led Joseph’s brothers to hate him and sell him into slavery. It is envy that leads to adultery, theft and false testimony, and it was envy of their neighbours that led the Israelites time and again to abandon God in favour of the pagan practices of the time.

Envy is the failure to understand the principle of creation as set out in Genesis 1, that everything has its place in the scheme of things. Each of us has our own task and our own blessings, and we are each loved and cherished by God. Live by these truths and there is order. Abandon them and there is chaos. Nothing is more pointless and destructive than to let someone else’s happiness diminish your own, which is what envy is and does. The antidote to envy is, as Ben Zoma famously said, “to rejoice in what we have” (Mishnah Avot 4:1) and not to worry about what we don’t yet have. Consumer societies are built on the creation and intensification of envy, which is why they lead to people having more and enjoying it less.

Thirty-three centuries after they were first given, the Ten Commandments remain the simplest, shortest guide to the creation and maintenance of a good society. Many alternatives have been tried, and most have ended in tears. The wise aphorism remains true: When all else fails, read the instructions.

[2] We do not know who the sectarians were: they may have included early Christians. The argument was that only these were directly heard by the Israelites from God. The other commandments were given indirectly, through Moses (see Rashi to Brachot 12a).

[7] The best book on this subject is Helmut Schoeck’s Envy; A Theory of Social Behavior, New York: Harcourt, Brace & World, 1969.