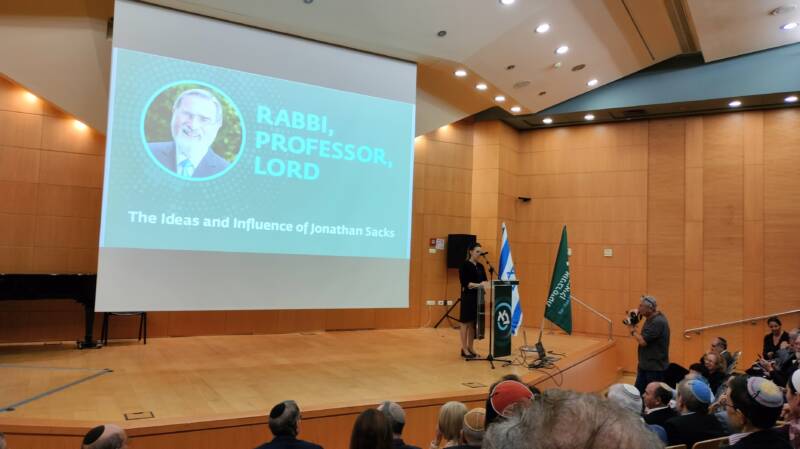 Israel’s Bar-Ilan University hosted a three-day conference from 17-19 January, bringing together scholars, students and guests from all over the world to discuss Rabbi Sacks’ teachings. The conference was co-sponsored by the Jewish News.

More than 1000 guests signed up for the conference, many of whom attended in-person at the university campus in Ramat Gan, and those unable to do so participated online. Conference organiser Dr. Miriam Feldmann Kaye introduced the conference, where almost 40 lectures were shared by academics on themes of religious extremism, Bible and commentary, Jewish philosophy, interreligious theology, political thought, ethics, and sustainability.

Israel’s President Isaac Herzog greeted the guests via a video message at the opening of the conference, hailing Rabbi Sacks’ intellectual legacy. “It’s no surprise that many in Israel have come to discover his teachings,” Herzog said.

University President Prof. Arie Zaban told the Jewish News that Rabbi Sacks was one of the “leading public intellectuals in the world.”

“There have been many great rabbinical thinkers. What is exceptional about Rabbi Sacks is that he developed a body of thought deeply grounded in the Jewish religious tradition that speaks to the most important contemporary issues for Jews and non-Jews alike. For many Jews, but also for many people of other religions or no religion, he was looked to as the foremost moral thinker of our age,” Prof. Zaban said.

Eliot Sacks thanked the university for hosting and arranging the conference honouring his brother, describing how deeply his connection to Israel was:

“It’s appropriate and fitting that this conference, the first to be devoted to Rabbi Sacks’ thoughts, is taking place in Israel, and in particular at Bar-Ilan University. My brother’s deep connection to Israel is well-known. A love that dated back to his first visit here with my late father shortly after the Six Day War in 1967.”

“There really are not enough words to describe the incredible privilege it has been to participate in and present at the conference on the thought of Rabbi Sacks. It wasn’t just the breadth and scope of the presentations, the level by which the speakers grappled, argued with and defended his work, or the discussions that took place amongst the diverse participants at the coffee tables during the breaks. It wasn’t even about the balance of rigorous academic analysis with personal, emotive, accounts of the relationships Rabbi Sacks had. It was about all this and more: sitting with a diverse community listening to a prophetic message that gives hope for the future, knowing that Rabbi Sacks in his comprehensive oeuvre has provided a remedy to the cancer that is spreading rapidly to fracture and divide our people.”

Catch up on the world-renowned speakers and view the full playlist of recorded lectures.